Australians infected with the coronavirus will be asked to rely on community care at home to get through the illness under a plan presented to national cabinet amid a dispute over state demands for more federal cash to prevent hospitals being overwhelmed.

The advice to national cabinet, presented last Friday but not released to the public, says that community care will be the mainstay when treating COVID-19 as the nation’s growing vaccination rate eases pressure on hospitals. 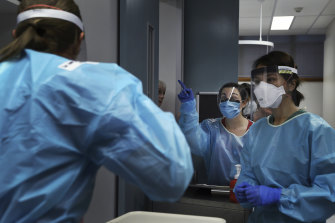 With hospitals under pressure, the federal government is working on ways to expand community care.Credit:Kate Geraghty

But Health Minister Greg Hunt stared down the demands on Tuesday by saying states were responsible for dealing with a case load they had always known would come.

“You get the feeling sometimes that people are desperate for a fight. They cannot complain about vaccines. So now they’re trying to create a diversion,” he said.

“Right now, the focus of the Queensland government shouldn’t be about fighting, but it should be encouraging people to say ‘now’s the moment to come forward to be vaccinated’.”

With hospitals under pressure, the federal government is working on ways to expand community care so that people who contract the virus can be treated outside the hospital system on the assumption that vaccination will protect almost all of them from serious illness.

Health Secretary Brendan Murphy said on Tuesday a report given to national cabinet last week, which is about 100 pages in length and outlines the state of the health system across the country, included plans to use more community care.

“That’s exactly the work that is in this 100-page document and that we’re still working through with the states and territories, with the AMA, with the [Royal] College of GPs, with primary health networks,” he said.

“Community care will be the mainstay of treatment with COVID. In a highly vaccinated scenario, we will not get a large number of people, hopefully, that will need hospital care.

“There’ll be some people who need to be monitored in the community. There’ll be some who will be pretty well and don’t need much care at all. So we are trying to improve and build on the experience.”

The government believes NSW and Victoria have well-developed community care programs that can be used to plan more services, with a role for Commonwealth GP respiratory clinics as part of the plan.

“Most jurisdictions are looking to stream those people that do need hospital care into specific hospitals so that they can cohort them together and make it simpler to not interfere with the rest of the hospital system, which must keep going,” Professor Murphy said.

“We’ve got to be able to continue to treat cancer and heart attacks and strokes and do elective surgery.”

Professor Murphy said he favoured transparency with the 100-page report but Mr Hunt said its release was a matter for national cabinet.

While total hospital funding is split 45:55 between Canberra and the states, a separate federal pledge of $6 billion on COVID-19 is part of a deal that splits funding 50:50. The AMA wants a 50:50 approach to hospital funding in the future.