China's embassy has reignited its dispute with Australia hours after Prime Minister Scott Morrison called for calm, accusing the Australian government of stoking nationalism through its attacks on China's foreign ministry.

In another breach of diplomatic protocol, the Chinese embassy on Tuesday revealed details of a private call between Department of Foreign Affairs secretary Frances Adamson and Ambassador Cheng Jingye. 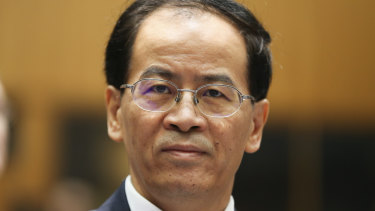 The Australian government on Tuesday escalated its concerns over the tweet to Twitter's San Francisco headquarters, after the company's local office ignored its pleas to take the image down.

"We would like to further stress the following: the rage and roar of some Australian politicians and media is nothing but misreading of and overreaction to Mr Zhao's tweet," an embassy spokesman said.

"The accusations made are simply to serve two purposes. One is to deflect public attention from the horrible atrocities by certain Australian soldiers. The other is to blame China for the worsening of bilateral ties. There may be another attempt to stoke domestic nationalism."

The Australian-government initiated Brereton inquiry released in November found up to 39 Afghans had been murdered by Australian soldiers. In response to the report, Prime Minister Scott Morrison has appointed a Special Investigator to refer briefs to the Commonwealth Director of Public Prosecutions.

The Chinese Communist Party has been criticised by dozens of countries for its record on human rights in Xinjiang, Tibet and Hong Kong, where it has imposed re-education programs, covered up forced labour camps, disappeared political opponents and imprisoned dissidents.

Prime Minister Scott Morrison on Monday labelled the image in the tweet "repugnant" and demanded China issue an apology, but he has now called for calm among Coalition MPs, telling the party room on Tuesday the issue needed no further amplification.

But tensions are set to rise further in the coming days as the Morrison government and Labor finalise an agreement on new laws giving it the power to scrap agreements struck by states, local councils and universities with foreign governments.

The laws, which will pass before the end of the week, will likely allow the federal government to tear up Victorian Premier Daniel Andrews' Belt and Road agreement with the Chinese government.

New Zealand Prime Minister Jacinda Ardern on Tuesday said she had raised concerns with Chinese authorities about Beijing’s use of the fabricated image as international pressure mounts on China's Foreign Ministry.

"In this case an image has been used that is not factually correct, that is not a genuine image. So we have raised that directly with Chinese authorities."

The intervention from Ardern is a sign of a broader international response to China's increasingly assertive diplomacy. New Zealand has been careful to maintain its economic relationship with its largest trading partner and has largely avoided making separate statements on China's conduct to date.

The French Foreign Ministry said it did not "consider the tweet in question to be worthy of the methods one would expect from the diplomacy of a country like China".

The image purports to show an Australian special forces soldier slitting the throat of a small Afghan child wrapped in an Australian flag.

The Australian government has been frustrated by its negotiations with Twitter over the past 48-hours.

The government brought in Australian eSafety commissioner Julie Inman Grant to negotiate the image's removal but discussions between Canberra and its local arm went nowhere before it was escalated to San Francisco.

"The image contained within the Tweet in question has been marked as sensitive media," she said.

China has been ramping up its criticism of Australia's human rights record as it simultaneously hits half-a-dozen Australian industries with trade strikes covering up to $20 billion in exports, blocking coal, seafood, wine, barley and cotton shipments. The embassy in November warned unless Australia changed its foreign policy positions on Huawei, foreign interference and a dozen other issues it would continue to face trade threats.

"We have got to recognise what is going at the moment is a pressure play. It is about bullying and intimidation," he told a McGrathNicol event.

"Indignation from the Chinese Communist Party is thoroughly instrumental and the purpose is compliance."

The Chinese embassy said it was up to Australia to solve the diplomatic impasse that has severed ministerial between the trading partners.

"We also urge the Australian side face up to the crux of the current setback of bilateral relationship and take constructive practical steps to help bring it back to the right track," the spokesman said.