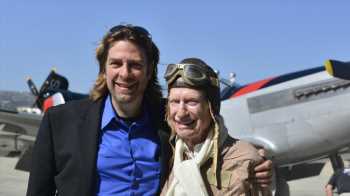 Producer Mark Damon, whose credits include “2 Guns” and “Lone Survivor,” has bought the film and television rights for Israeli war story “Angels in The Sky” in a pre-Cannes Film Festival deal.

Damon, the co-head of DCR Finance Fund and Foresight Unlimited, will executive produce with DCR Finance Fund as primary financial backer. Damon will partner with former Paramount Pictures executives Mike Flint and Jerry Meadors along with Mark Lansky, an investment specialist who is the nephew of Meyer Lansky. Flint is the producer.

Foresight and DCR will launch sales at the upcoming Cannes Film Festival, which opens May 14. Peter Dekom is the project’s legal consultant.

The 2017 book, written by Bob Gandt, dramatizes the 1948 conflict in the Middle East immediately after the state of Israel was formed, which triggered a nine-month war waged by five Arab nations. About 150 overseas pilots and their crews, dubbed the Machal, made up most of the fledgling Israeli Air Force that turned the tide in Israel’s favor. The pilots came from the U.S., Canada, Australia, Britain, France and South Africa in defiance of their country’s laws.

Most of the pilots were World War II veterans, including Mike Flint’s father Mitchell Flint. The pilots often were flying old Nazi Messerschmitts, bandaged together from reassembled smuggled parts from Czechoslovakia with stars of David painted over swastikas. The Israelis had no regular army, no air force, and no allies.

Damon’s other credits include “Monster,” “And So It Goes,” “Flypaper,” “The Ledge” and “Wild Orchid.”