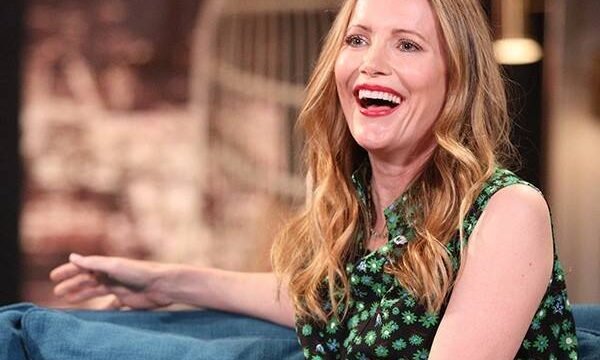 But the cat’s out of the bag in this clip from Wednesday’s Busy Tonight, which sees Leslie waxing nostalgic about early mornings on set with her George of the Jungle co-star, who apparently used to greet her with a casual lip-kiss before getting into costume.

“Every morning before work we were in the hair and makeup trailer getting ready. And he would come in and kiss me on the lips,” she tells host Busy Philippswith an ear-to-ear grin. “Just like, ‘Good morning!’ And kiss. You know, like he’s European or something.”

Leslie got used to those morning smooches—earlier in the clip, the actor cheekily notes that since her character was supposed to fall for Brendan’s onscreen, she just went ahead and “fell in love with him in real life”—so it was pretty jarring for her when the kisses stopped suddenly one day.

“He caught me off guard! I took a big bite of oatmeal and he was like right behind me…And he went into kiss me and my lips had like a sticky oatmeal film on them,” she remembers. “Never kissed me again after that.”

Luckily, her old colleague gets an opportunity to explain himself two decades after the fact. Seconds later, Busy reveals Brendan has been backstage the whole time.

“Did you know I was in love with you?” Leslie asks, eyeing the bouquet of peonies he’s brought with him. He doesn’t respond directly, but it seems safe to say that if Brendan didn’t know before, he probably does now.

“It was maple oatmeal,” he replies, for the record. And: “I don’t like maple syrup.”

Brendan and Leslie should write their own rom-com. See their reunion play out—and watch Busy and Leslie’s perfect I Love Lucy reenactment—in the clips above!

Watch the Busy Tonight finale tonight at 11 p.m for some surprise guests, only on E!