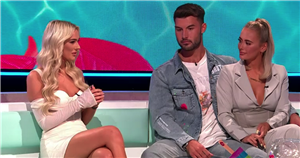 Love Love Island? Our Factor 50 email brings all the goss direct to your inbox

The Love Island cast reunited last night for a one-off studio special met with a mixed reaction by viewers.

Headed up by winners Millie Court and Liam Reardon, the famous faces of the last series gathered together for one last on-screen showdown.

However, the show has been criticised for the lack of action, with some fans posting on social media that the show ‘gave them the ick’.

“This reunion is so awkward; why is no one laughing at the jokes,” one fan questioned, while another commented: “This reunion show is awkward and not in a good way.”

Firstly, there was one notable absence in the form of Jake Cornish and fans of the show were quick to find an explanation for his whereabouts.

In fact, the show gave no reasons for his absence after leaving the villa, just friends with Liberty Poole, who appeared last night on her own.

At the show's start, Laura Whitmore revealed that he wouldn't be joining us for the evening. "So, sadly, Jake can't be with us this evening as he isn't feeling very well," the presenter said.

"But get well soon and sending you lots of love."

Since leaving the villa, Liberty has said that she thinks Jake was playing a game by coupling up with her.

Kaz and Tyler announced that they had made things official since leaving the villa and are seeing how their relationship pans out on the outside world.

However, fans were frustrated that host Laura didn’t grill Clarisse over comments she’d made about the couple since leaving the villa.

The reality stars were caught up in a love triangle after Tyler Cruickshank brought Clarisse back from Casa Amor despite being coupled up with Kaz.

“Why didn’t Laura ask about Clarisse saying, ‘Tyler would choose me over Kaz on the outside?? Wtf is this dry a** reunion??” one tweet read.

Despite all this, there was one notable moment of drama when Millie and Liam sat through a very awkward exchange when Lillie was brought in to congratulate them on their win.

Lillie told the couple they made a 'picture-perfect couple' after Millie was made to watch uncomfortable footage of the moment she found out Lillie and Liam had shared a kiss.

Trying to smooth over the situation, Liam told Lillie: “You're a nice person, I'm a nice person. We can be friends, how’s that?” while Millie sat in silence.

Catch up with the whole show via the ITVhub.