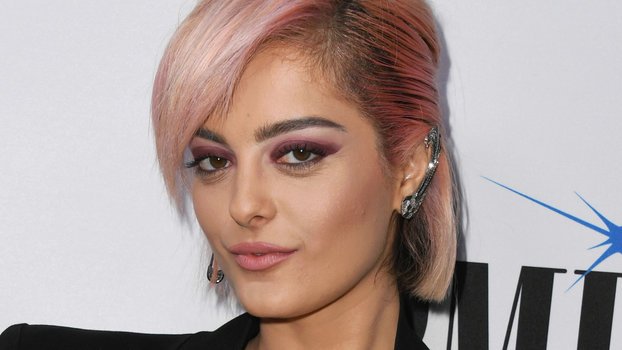 Bebe Rexha is no stranger to being shamed for the way she looks. But because she lets most of the hate roll right off of her back, it's no big deal. However, her latest Instagram post calls out the unrealistic expectations that people have when they head to the beach, making for the perfect mantra before summer Fridays and getaways. Rexha's snapshot, which shows her having what looks like a pretty great beach day, claps back at anyone who's even thinking about saying that she's not perfect. She knows she's not and she thinks that perfect — the fake Photoshop kind of perfect — isn't something to strive for.

In the post, which is geotagged for San Juan, Puerto Rico, Rexha is holding onto a tree branch and wearing a bold red bikini. She's got beach hair (that happens to be pink), big shades, and plenty of attitude. That attitude carried into her caption, which was a no-nonsense take on body image. She's happy with the way she looks, because she thinks it's what a real woman looks like.

RELATED: Bebe Rexha Rocks Plunging Red Gown at the Grammys After Designers Told Her She Was "Too Big" to Dress

Just last year, Rexha was clapping back at haters who criticized her weight. Clad in a pair of curve-hugging jeans, Rexha called out anyone who accused her of photoshopping her figure, saying that it was all real, not computer-generated.

"Yes I gained weight. Cause I'm human and I like to eat. And what I eat carbs my ass gets big," Rexha wrote alongside a photo of herself last year.

Instagram isn't the only place she's addressed her butt. She also tweeted about claims that she'd enhanced her figure, saying that — just like a lot of people — she likes to eat.

But she's got a strong support system. She told People that while she toured with Katy Perry and was struggling with staying positive about the way that she looked, Perry gave her some advice that she still remembers.

"She was like, 'Why are you reading the comments? That’s the No. 1 rule, don’t read the comments,'" she said. "Because you will see someone telling you you're fat and ugly and you should die and you'll think, 'Oh my God, is that true?'"