Three people could have died — none did.

An Atlanta man took his own life in his hands — quite literally — when he decided to break up an armed road rage standoff… with hugs.

Shaheed Dent was driving through his hometown of Clayco on Sunday when he witnessed what would make most of us throw the car into reverse: one man pointing a gun at another.

But instead of ducking for cover, Shaheed risked his own life by immediately jumping out of the car and attempting to de-escalate the situation. 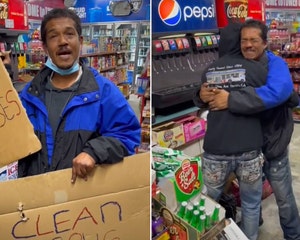 “I legit had to hop out da Chevy cause God was in my heart heavy,” he wrote.

The fight, he said, broke out over a parking space.

“They got into a vocal argument that soon after turned physical,” he wrote. “Black dude put some hands on white dude and damn near snatched him out of his car.”

“When white boy drew down on em (He technically was in the right) black dude backed all the way back.”

In the tense video, one man can be seen standing in the middle of the street, pointing the gun at the second man, who is kneeling behind a car.

“Get out of the way!” the armed man shouts, while the other dares him to “Shoot it! Shoot it!”

Wading right into the line of fire, Shaheed begs “Yo! Back up, hey y’all ain’t gotta kill nobody today!”

“He just attacked me in my f–ing car!” the armed man exclaims, gun still pointed squarely at the now advancing second driver.

“Chill! Put it down bro. It’s all love, it’s 2021 Bro,” he says, before giving the highly irate driver a hug, and then walking to the second man to give the same.

The two men made up later that day, he wrote.

“I’ve lost 4 friends in 2020 to the gun, and in 2021 I encourage you all to be the change you want to see,” Shaheed wrote afterwards. “I love everyone no matter they color or background.”

“This looks like the white guy in the wrong but it was deeper than that. Mistakes were made and it shouldn’t have costed a life. I couldn’t just stand idle. I might NEVER take the stand but ima stand for what I believe in. #NoMoreKilling2021”

In a follow up video, Shaheed explained what was going through his mind at the time, and what influenced his split second decision to get involved; aside from the four close friends he lost to gun violence in 2020 alone, he said he also never met his own paternal grandmother, after she was shot dead in front of his dad.

He also revealed that he knew the armed man was in the right to pull his gun — because he had been in that situation himself, “and unfortunately I shot someone.”

“When I seen that situation I knew the white guy was in the right… but at that point in time, he didn’t have to take it there,” he said. “When you’re in that situation, you know when you have to, and when you don’t have to. You’re not afraid for you life? Then don’t shoot, and don’t kill, bro.”

“The Black dude, he could’ve got popped when he was pulling the dude out of the car. But he didn’t.”

After watching him flee from the gun and hide behind the car, “I seen the look in his face, like his whole life flashing before him,” he recalled.

To the few who accused him of posting for clout, and questioning why he took his phone out in the first place, he retorted: “I posted that to show positivity. I posted that to try and change something in here,” he added, pointing to his heart.

He begged those watching to respect one another, as no argument is worth a life — yours or theirs.

In another plot twist, he said the armed man in the video had threatened him with legal action for “slandering his name” — even though Shaheed vouched for his actions.

“I never said anything about that man’s character,” he said. “First of all he was the first person I gave a hug to. I was not choosing sides.”

“A lot of folks are saying I saved that man’s life… God is the only one who can say whether that man was gonna get mad enough to squeeze it or not; but I didn’t leave until he said ‘man, I’m not going to shoot that man, I’m not going to kill him.’ He looked me straight in the eyes and said that.” 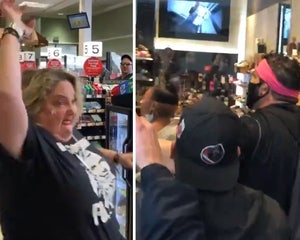