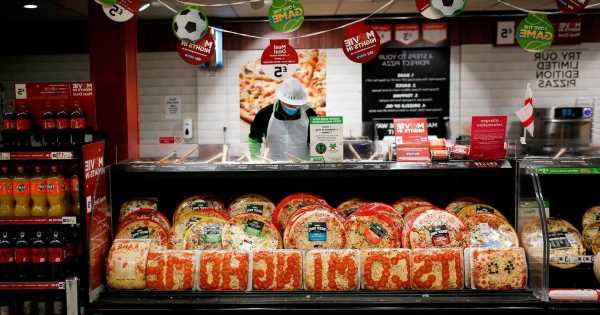 An Asda store, in Bedminster, went viral this week for its fun tribute to the England football team ahead of their cracking win in the Euros semi-final.

Ahead of the England vs Denmark game last night the retail workers decided to spell out “It’s coming home” in pepperoni on the cheesy meal.

And, there was even a separate pizza topped with a mozzarella England shirt and the phrase “Kane 9” after caption Harry Kane.

A pepperoni St George’s cross tops off the design nicely with a patriotic twist.

Is football coming home? Tell us your thoughts in the comments below…

Of course, “it’s coming home” refers to the England chant taken from “Three Lions” the popular 1996 song by Baddiel, Skinner and the Lightning Seeds.

The patriotic pizzas were spotted in the shop and quickly went viral after someone uploaded them to Twitter.

A whopping 1,600 retweets quickly racked up alongside thousands of likes.

One person commented on the Kane pizza: “We all want that one.”

“I love this country so much,” added another.

While a fan said: “Isn’t it just fantastic!”.

“Wish I’d have known would have popped in!”

Want to bring a little glamour to your life every day with all the most exciting real-life stories, fashion and even sex tips HOT off the press?

Well, we've got you covered with our great new Hot Topics newsletter – it'll drop straight into your inbox around 7pm and you can unsubscribe whenever you like.

And signing up now means you'll get a front row seat for our great new series inside the lives of the next generation of Daily Star Page 3 girls.

Who knows, maybe these dishy delights were good luck as England smashed Denmark 2-1 to secure their place in the final.

Now, the English boys will take on Italy in the deciding match of the Euros 2020 on Sunday.