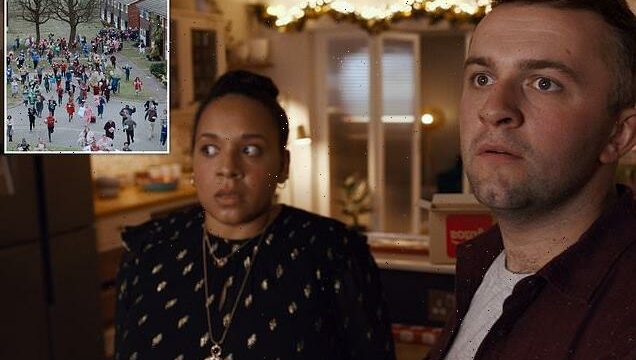 Argos is the latest British retailer to release its Christmas advert, with a funny clip centred on a couple’s festive party that gets a bit out of hand.

The 50-second long clip, which will air on ITV and Sky at 5:30pm today, shows a couple setting up a small and intimate dinner party for a few friends at their house.

However, outside, a hoard of party-loving neighbours, all bringing gifts and side dishes, can be seen running to the unsuspecting couple’s home.

The couple at first panic at the sheer number of people that are coming to their house, but they just decide to order a few things off the Argos app in order to host all their very eager guests, showing that everyone is welcome. 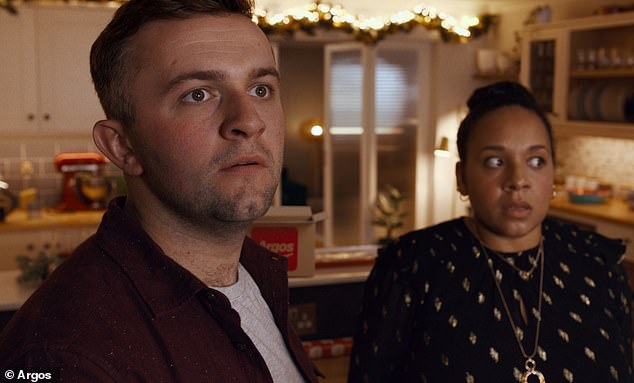 Argos’ 50-second long Christmas advert, which will air on ITV and Sky at 5:3pm today, shows a couple setting up a small and intimate dinner party for a few friends

Outside, a hoard of party-loving neighbour, all bringing gifts and side dishes, can be seen running to the unsuspecting couple’s home

The clip shows the couple setting up a few plates and filling a single bowl with tortilla chips and dip, with the woman telling her partner that they are expecting ‘just a few people.’

But as the couple go on with their preparations, the group of guests running to their house only grows bigger.

One guest is seen bringing a seafood platter, while another is enthusiastically carrying a festive trifle

As the group runs to the house in slow motion, the couple begins to realise that much more people than they initially thought are on their way to their house.

The clip includes several references to action movies, including a shot of the couple’s shaking champagne flutes and cutlery, in a hint at Jurassic Park, where the dinosaur’s heavy walk gets water and jelly to shake.

As more and more neighbours congregate to the house, an ominous instrumental version of Live is Life, by Opus, which has been Argos’ flagship song since last year, plays in the background.

As the group draws closer, the couple are seen taking deep breaths, with the woman saying: ‘it’s going to be okay.’ 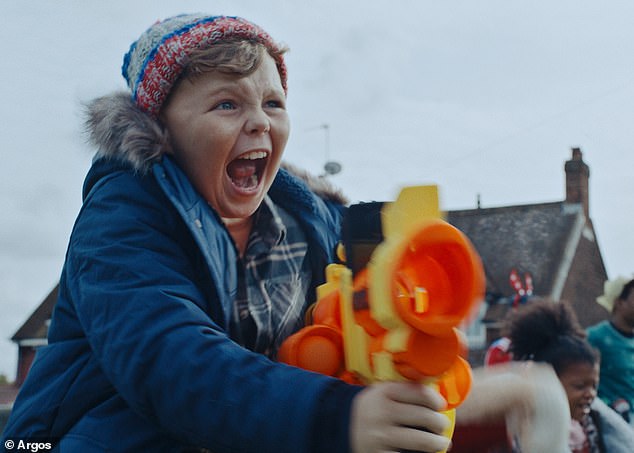 Her partner whips off the Argos app, and says ‘we’re going to need a bigger bowl,’ in a reference to Steven Spielberg’s Jaws.

Finally, the words ‘they are coming,’ ‘be ready,’ are shows on screen right as the group reaches the couple’s house, and someone rings the bell

Rob Quartermain, Head of Marketing Campaigns at Argos said of the advert: ‘We know how difficult the last few years have been for everyone,

‘So we really wanted to bring a smile to viewers faces by highlighting the fun and comedic moments of Christmas get-togethers, along with the unique experience of being able to bring everyone, from all ages and backgrounds, to share a wonderful Christmas together at home.

‘This year’s advert really aims to celebrate that moment, and how Argos has everything you need to make this Christmas truly special,’ he added.