Andy Cohen is sharing some highly relatable adventures in parenting.

Over the weekend, the 54-year-old Bravo boss shared a video of his 3-year-old Benjamin Allen throwing a tantrum while driving back from their family vacation.

Cohen approached the meltdowns with a sense of humor as he can be heard telling Ben, who has been “watching Bob the Builder for six hours” straight, “you can’t want to watch more” as Ben sobs “I do” in response.

When he is met with unintelligible cries, the television personality jokingly snarls at the camera,” I know it’s been fun, but vacation’s over! OK?” he says to which Ben wails, “I want to go back!”

The clip then cuts to a silent car and hilariously flashes the words, “three minutes later.” Cohen then asks the toddler if he feels better after getting over his tantrum.

Andy clarifies, “You’re not upset anymore about leaving? You’re okay? You got it out of your system?” 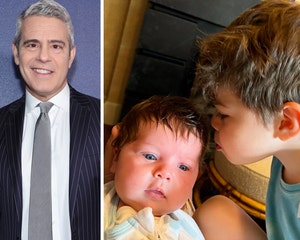 “I was just kidding,” the boy answers calmly.

“Wow, that was some joke, my man,” Cohen sighs as other passengers erupt with laughter.

The Bravolebrity is also dad to daughter Lucy who was born on April 29. Ben and Lucy are biological siblings though they were welcomed through different surrogates.

In an Instagram post back in April, Andy revealed he had become a father for the second time.

“HERE’S LUCY!!!!! Meet my daughter, Lucy Eve Cohen!” he captioned a photo of himself holding his new bundle of joy at the time. “She’s 8 pounds 13 oz and was born at 5:13 pm in New York City!!! Her big brother can’t wait to meet her! Thank you to my rock star surrogate (ALL surrogates are rockstars, by the way) and everyone who helped make this miracle happen. I’m so happy.”