Los Angeles: After an election day telecast that looked like it was going to stretch into a whole week, in the end it was all over in 16 minutes.

CNN was the first rolling news channel to take the step nobody seemed to want to take with host Wolf Blitzer calling the US election for now president-elect Joe Biden at 11.24am Saturday, EST (3.40am AEDT). Within minutes the broadcast networks NBC, CBS and ABC and the traditional line caller, the wire agency Associated Press, followed suit. 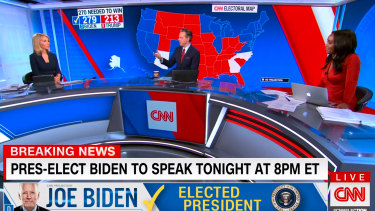 CNN covers the US election win by Democrat Joe Biden.

Over on Fox News, which has spent the last four years blurring the line between journalism and state-controlled media, the concession of President Donald Trump's defeat at the polls came more cautiously at 11.40am EST.

For those still in bed on the west coast on an otherwise ordinary but cool autumn Saturday morning, their alarm clocks were replaced by an extraordinary din: the sound of cheers, the banging of pots and pans and the honking of car horns the likes of which have not been heard since such noise was created nightly in support of essential workers during the early days of COVID crisis. It was a scene replayed in cities across America.

To some extent, as the news broke, America's television commentariat played the parts they were cast to play. Democrat-leaning commentators on multiple networks were cautiously jubilant. Republican-leaning commentators were suddenly silent. But there was a powerful common ground which soon manifested, both sides demonstrating a desire to move forward.

Indeed the speed with which Fox News began calling Biden the "president-elect", despite an internal memo not to do so, suggests that owner Rupert Murdoch's withdrawal of support for Trump is all but confirmed. 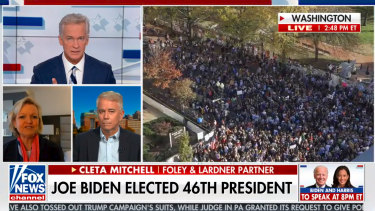 CNN had reported earlier that its producers had sighted two internal memos circulated within Fox which instructed presenters not to use term traditionally applied to the winner of a presidential election, and instead use the phrasing "has enough electoral votes to win the presidency" when addressing the point. Fox, predictably, denied the memos existed.

On television screens, the debate turned quickly to: what next? What tone would Biden take in his victory speech? How quickly would he announce his cabinet? And how long would Trump, who was predictably playing golf while all of this transpired, continue to deny the election result?

In part the speed of that transition stems from a widely felt fatigue with the divisive politics of the last four years – and also the exhausting 24-hour coverage of the last five days. Think of CNN's data analyst John King, for example, who has reportedly had six hours sleep since election day.

Two regular sparring partners on CNN – the analyst Van Jones and the former Republican senator Rick Santorum – seemed to encapsulate the emotions felt by the two sides. "It's easier to be a parent this morning," Jones said, breaking down in tears. "It's easier to tell your kids, character matters. Telling the truth matters." Santorum, who largely tows the line on White House talking points, had nothing to say. 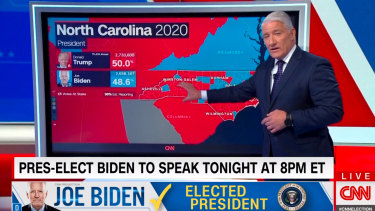 To that point, it feels like as the week progressed, data became the breakout star of the television coverage of the 2020 presidential election.

In a business where much of the glory is handed to the program hosts, crunching numbers might not seem like a particularly sexy pastime, but it feels like this is the week we hung on every word uttered by CNN's John King, Fox News's Arnon Mishkin and MSNBC's Steve Kornacki.

For five straight days they, and others, have crunched number after number in front of various "magic walls", pulled open data on electorate after electorate, and extrapolated the many "paths" to the presidency which, as the week wore on, thinned and thinned until there was just one left, taken by Biden.

And for television audiences, the end of an election day that has actually lasted almost 130 hours, a result represents a chance not to dive even deeper into even more TV coverage, but perhaps to switch off the television for the first time in five days.

Or, as CNN presenter Jake Tapper offered his audience, "To paraphrase President Ford, for tens of millions of Americans, our long national nightmare is over."

Understand the election result and its aftermath with expert analysis from US correspondent Matthew Knott. Sign up to The Sydney Morning Herald‘s newsletter here, The Age‘s here, Brisbane Times‘ here and WAtoday‘s here.