The journey back to the negotiating table has taken three long years. Both sides now have a target to aim for.

Foreign Minister Penny Wong’s 24 hours in Beijing were freighted with symbolism but the Chinese Communist Party prizes symbolism more than most.

What the visit did was open the door to a trip to Beijing by Prime Minister Anthony Albanese next year. The timing is solid. Wednesday marked the 50th anniversary of diplomatic relations between Australia and China. 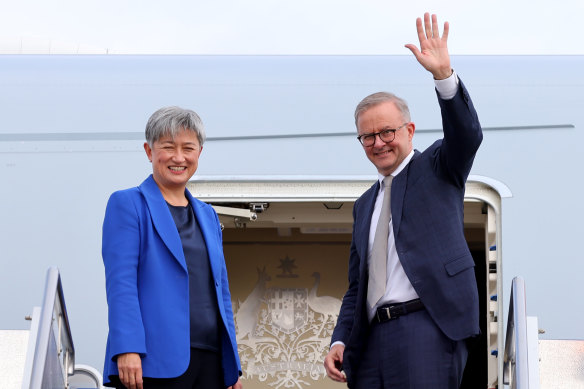 In March, Xi Jinping will be sworn in as president for a third term and appoint Premier Li Keqiang’s successor at the National People’s Congress. On October 31, China will mark the 50th anniversary of the first visit by an Australia prime minister, Gough Whitlam. Every prime minister except Scott Morrison has visited since.

That allows 10 months for bureaucrats on both sides to work out the details. They have much to do: trade sanctions on half a dozen industries remain, as do two Australians arbitrarily detained in Beijing – Cheng Lei and Yang Hengjun.

But dialogue begets dialogue. The goal of a foreign minister’s visit is never just a foreign minister’s visit. Just like the Strategic Economic Dialogue which brings together trade and foreign officials below ministerial level, all levers of government on both sides are required to work up to a leaders’ meeting. The dialogue was suspended in May 2021 after Australia tore up Victoria’s Belt and Road deal. One Chinese official said at the time that the relationship was beyond repair. It is now on the cusp of being brought back to life.

All it took was an election, an anniversary, diplomatic discipline, and the powerful motivation of economic self-interest on both sides.

By Wednesday afternoon, as Wong and her counterpart Wang Yi prepared to shake hands in the Diaoyutai State Guesthouse in Beijing, Xi gave his imprimatur to the détente.

“China is ready to advance relations with Australia based on mutual respect, win-win principles,” Xi said in a message distributed by Chinese state media.

Xi’s comments are boilerplate, but they left the unmistakable impression that a push for a revival is coming from the very top. They are similar to remarks that have been made by Xi to other leaders this year as China celebrated its 50th anniversary with dozens of other countries.

“China is clearly making nice with a lot of countries around the world,” said James Curran, a professor of Chinese history and politics at the University of Sydney.

“The question is: why is China changing on Australia now? I would say there is a hard-headed judgment that’s been made in Beijing that the stability of Australian supply of our natural resources, iron ore, in particular, is absolutely critical to their post-COVID recovery.”

China is symbolic but not sentimental. Its economy is being battered by the pandemic, so it embraced the natural reset opportunities presented to it – the election and the anniversary – to start a dialogue with a government that showed less of an interest in making the “China threat” narrative into a domestic political victory.

In office, the Coalition made decisions needed on national security, such as blocking Huawei and implementing foreign interference legislation. Wong landed in Beijing with her hand strengthened because of them.

None have had to be sacrificed for the meeting to occur, but the tone has changed because Labor has yet to make difficult decisions on China and because it deliberately moderated its approach to get the dialogue flowing again.

The results are already starting to show in the business sector. Australian lobster farmers and winemakers are seeing investment inquiries from Chinese importers. The Chinese General Administration of Customs is now suddenly promoting Australian lobsters, once left stranded and dying on airport tarmacs, as “widely enjoyed by our consumers”.

Albanese’s diary minders will be pencilling in October 31, 2023, for his first visit to Beijing. Before that, Australian officials will be busy getting their background on Xi’s protege, Li Qiang, the former Shanghai party secretary expected to become premier when Li retires. It will be vital for Australia to develop a relationship with the man who is much closer to Xi than Li ever was, particularly when the Chinese premier has historically had a more frequent dialogue with Australian leaders than the president.

The timeline also offers hope for Yang and Cheng, a father and a mother who have been away from their children for too many Christmases and birthdays.

It is unlikely that Albanese would fly to Beijing while they were in jail.

Their release would expose China’s cynical use of hostage diplomacy. Cheng and Yang’s families would not care. They would have them home.