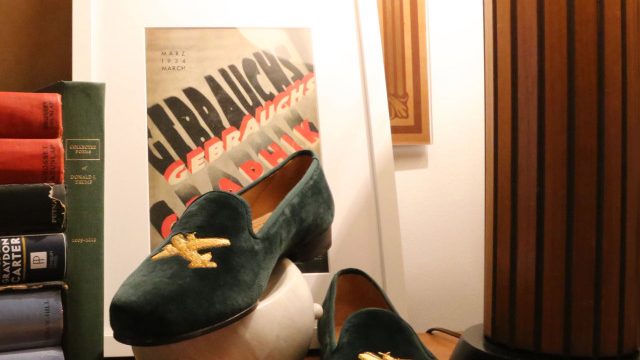 Air Mail, the digital news weekly created by former Vanity Fair editor in chief Graydon Carter, has teamed with shoemaker Stubbs and Wooten on a limited-edition collection of footwear.

Retailing for $550 a pair, the slippers — the shape that put the shoemaker on the map — come in two styles, called the Earhart and the Hughes, nods to the aviation icons Amelia Earhart and Howard Hughes and incorporating the Air Mail DC-3 logo.

The online news weekly launched in July 2019 and along with Carter is coedited by Alessandra Stanley, who served as a foreign correspondent and critic for The New York Times. The media channel covers a range of topics including news, arts, politics, culture, literature, film and television, society and fashion.

Each slipper style is available in burgundy, navy, hunter and black velvet and the designs are available online and at Stubbs and Wooten boutiques in Palm Beach, Greenwich and New York.