Bruce Beresford, living legend of Australian cinema, is reluctantly persuaded to put on VR goggles for the first time.

He freezes in astonishment. 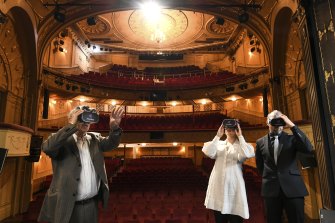 And suddenly you can’t get the felt-lined tech off the head of the director of Breaker Morant and Driving Miss Daisy. In the 3D, 360-degree virtual world created by the goggles, he’s sitting in a Melbourne bar while a pianist and opera singer perform the ‘drinking song’ from La Traviata.

Beresford turns his head, looking down at the keys on the piano, and around at the other bar patrons ‘behind’ him, as the tuxedoed tenor warbles about the joys of booze and proffers a glass of champagne.

He’s seized by the desire to wander around the bar. “It’s a good way to break your neck, because you think you’re there,” he quips. “Extraordinary. Absolutely extraordinary.”

Next month Beresford will take part in an experiment that’s being claimed as a world first: a live broadcast of a professional opera production in virtual reality. 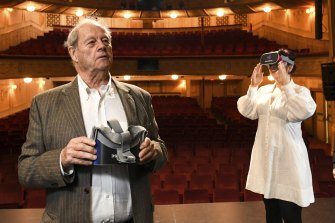 The new production of Verdi’s Macbeth that Beresford has directed for Melbourne Opera will be captured at Her Majesty’s Theatre by five super-high-definition cameras. Online audience members can switch at will between a front row seat (where they can gawk at fellow operagoers), a prime spot next to the conductor, upstage in the thick of the action, plus a couple more locations (possibly in the wings or in the orchestra pit).

It’s the first step of a plan with big ambitions: no less than transforming the performing arts and saving opera.

“There’s a tonne of content people can now binge on [online], but what people really miss is the tactile experience of being in the audience,” he says. “The opera is still the opera, but what we’re doing is trying to open up new channels of accessibility … we want it to be on the channels where the audiences go.

“If you’re a 20-something, the prospect of buying a ticket and going to the opera is a big commitment; the prospect of it being in a headset and going, ‘Oh hell, I might just check that out’ … people could be experimenting and suddenly find a love for the craft.”

He sees the future of VR as a “premium ticket” experience that adds backstage and behind-the-scenes access to productions.

Hocking says Melbourne Opera “has always been about trying to break down the barriers and get different audiences”.

While nothing beats really being there, says Hocking, it’s a “wonderful mid-way experience”: more immersive than a simple video stream (they’re doing that as well, in partnership with Melbourne Digital Concert Hall) and easier to get to than a city theatre seat.

“I think it will really catch on – how many people want to actually be on stage in an opera? And anything that can get the existing productions out to more people is to be embraced, to keep the art form going – it’s so difficult.”

Beresford has always taken an interest in new filmmaking technology, and has devoured the expanding menu of online opera productions out of The Metropolitan Opera, Covent Garden and Berlin.

“It’s not as exciting as watching a production live but the sound is fantastic.”

He hopes the continued rise of on-demand productions and the addition of VR will bring opera to a new generation.

“Sometimes I despair about younger audiences and opera,” he says. “I’ve got some grandchildren who simply couldn’t care less about opera and my attempts to influence them failed dismally. Maybe the VR thing will help? And Macbeth is a pretty exciting opera. It’s got lots of blood and guts, a couple of really juicy murders.”

Macbeth opens May 18, get tickets at melbourneopera.com (VR ticketing and pricing TBA).