In 2014, shortly after graduating from the University of Pennsylvania, Shannon Leon moved to Washington and rented a room in an all-female house via Craigslist. Her new roommates sometimes got together with a group of guys that included John Keiran, who admired Ms. Leon from afar for months.

“I thought she was extremely beautiful,” he said. One night, he ran into her by chance in a bar in Washington and they ended up talking for hours. “It just clicked and felt effortless,” said Mr. Keiran, who texted her minutes after they parted ways.

Mr. Keiran graduated from James Madison University and comes across as self-deprecating, likable and funny. He was born in Oita, Japan, and adopted as an infant by an American couple, Alan and Sally Keiran. His father, who died in December, was a chaplain in the Navy and the family moved often, from Rhode Island to Hawaii to Missouri, which made Mr. Keiran especially outgoing. “As a result, he’s just so good at making friends,” said Ms. Leon, who grew up in a Chinese-Filipino family in Chicago where her parents, Wing Sun and Marie Rose Leon, own a few small restaurants.

The two started dating although Ms. Leon, unlike Mr. Keiran, wanted to date other people, too.

“I had to step up my game and win her over,” said Mr. Keiran, 34. One way he did so was by cooking for her. “There’d be Chilean sea bass with a cauliflower purée underneath it,” said Ms. Leon, 30. She added, “The thing I found most attractive about him is he’s very calm and confident. It never felt like he was flexing.”

Before long, whenever she was on a date with someone else, she thought about him the whole time. 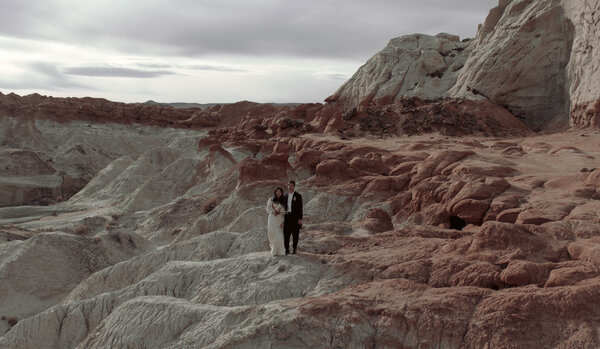 They now live in San Francisco where he is a risk manager at Facebook and she works in marketing at Google. They describe themselves as a “low conflict couple” with different personalities. For one thing, he cries more easily than her, especially when they’re watching romantic comedies. “She’ll be laughing and I’ll have tears rolling down my face,” he said.

Ms. Leon collects old family recipes and is fluent in Cantonese, all of which have inspired him to learn more about his own cultural background. “Being Asian in a white family, I wasn’t thinking of my heritage,’’ he said. “Shannon has helped me look more deeply into that.’’

Long before the pandemic made it imperative, they were inseparable. “We have our own independent inner and outer lives and interests but we really do like to do everything together,” Ms. Leon wrote in an email.

Mr. Keiran has some tattoos, including one of his favorite quote: “Test everything, hold onto the good.” On March 29, 2019, soon after he got a tattoo of Ms. Leon’s initials on his wrist, he proposed in Point Reyes, Calif., on a bluff overlooking the ocean.

On the eve of the Chinese New Year, Feb. 11, they eloped while staying at Amangiri, a luxury hotel in the middle of the desert in Canyon Point, Utah. The area is known for its peculiar rock formations called hoodoos. The couple wanted to say their vows in an otherworldly place, one that felt “almost like a movie or another planet,” Ms. Leon said.

For their afternoon ceremony, they headed into the desert with Haley Nord, a photographer who also acted as their guide and became a marriage officiator designee with Utah County so that she could be the officiant, too.

The bride wore a white Kamperett wrap dress and faux-snakeskin boots with heels resembling stacks of white pebbles. She somehow stayed upright and graceful as the three walked for about a mile until they found a good spot for the wedding, at the base of a rock wall as pocked as the moon.

“In our vows, everyone thought I’d be the one crying but Shannon started crying as well,” the groom said. “I was like, ‘Oh, I got you!’”