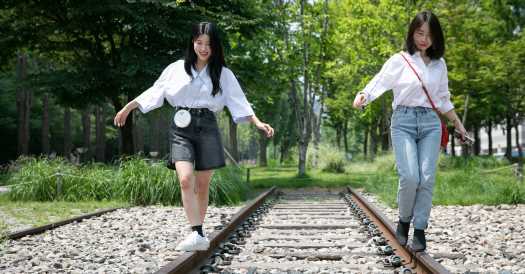 Last May, in one of those reports that seemed both unbelievable and yet too tantalizing to ignore, there was a flurry of excitement in numerous Western newspapers over the supposed news that Kim Jong-un, the autocratic ruler of North Korea, had issued an official edict banning ripped or skinny jeans.

Though it turned out to be a hyperbolic version of outdated news, three defectors who live in South Korea said the idea of jeans as symbolizing a kind of rebellion for a changed future for those living in North Korea is not as far-fetched as it might seem.

“When I lived in North Korea, I never had the freedom to wear what I wanted, but I never questioned it because I didn’t know this freedom existed,” said Jihyun Kang, 31, who grew up in Chongjin, the third-largest city in North Korea.

Ms. Kang first glimpsed that freedom when she was vacationing at Mount Paektu and saw a foreign tourist. “I was convinced that he was homeless because only beggars wore torn clothes in North Korea,” she said. “But my father told me that it was expensive for foreigners to visit North Korea and he supposed that the jeans were ripped as a form of style.”

Ms. Kang said it was the first time in her life she pondered that word — “style” — and the questions sent her toward broader interrogations about her identity and the meaning of personal liberation that ultimately led to her decision to leave her home country.

And she is not alone. Kang Nara, a 23-year-old social media star, and Yoon Miso, a 32-year-old image consultant, both of whom left North Korea for South Korea, trace their routes to freedom to fashion. Now they are trying to help others understand just how powerful clothes can be. 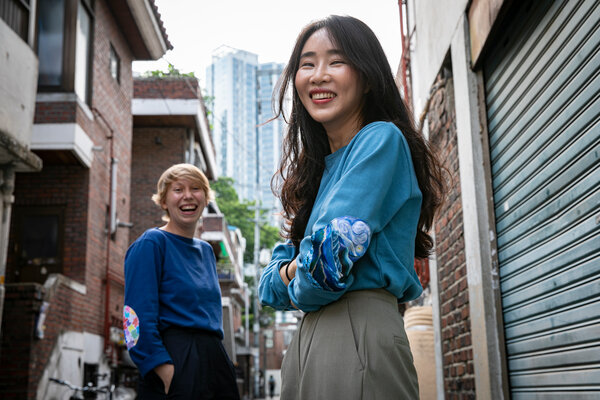 What Does Fashion Mean in North Korea?

While little information is available about North Korea’s fashion industry, styles across the nation vary significantly from one province to another and from one social class to another. In Pyongyang, for example, the intensely monitored capital where the elite live, fashion looks very different from its expression in the rest of the country, an estimated 60 percent of whose population live in absolute poverty.

North Korean citizens were once provided state rations of clothes — two-piece, uniform-like outfits in limited solid colors — but when the economy collapsed in the mid-1990s, people developed their own system of local markets and there has been a wider range of options ever since.

Market vendors initially sold whatever they could farm, cook or sew at home, but as of 2017 there were 440 official markets stocked mostly with Chinese imports, including food, household goods and apparel.

There is also an active black market, with items like USB sticks containing foreign media; makeup; and “prohibited clothing.” Defectors say true fashionistas get to know private sellers and buy the riskiest items in their homes.

Laws and punishments in North Korea are not public, so it’s unclear which garments and accessories are illegal. Instead, there are directives prohibiting “items that represent capitalist ideas” outlined in Rodong Sinmun, the country’s state-run newspaper.

Organizations like the Socialist Patriotic Youth League (S.P.Y.L.) have long interpreted this to include miniskirts, shirts with English lettering and various types of jeans, and have policed the public accordingly.

For decades, those daring to dress outside the box faced public shaming or imprisonment if caught. Ms. Kang remembered a time, for instance, when she had to beg a patrol officer to spare her from a shaming session after she was caught wearing white denim pants (she succeeded).

“If I wanted to wear something, like a pair of jeans, I had to sneak around,” Ms. Kang, the social media star, said. “I’d take back-alley streets, or I’d hide if I saw a patrol officer coming my way.”

Ms. Yoon, who is from Hyesan, said she got her first pair of jeans — blue bell bottoms — at a private dealer’s house when she was 14. “One day, I paired the jeans with a brightly colored top and got caught,” she said.

An S.P.Y.L. officer cut up her jeans at a public shaming session, she said, and he had her beg publicly for forgiveness and notified her school, where she was lectured on the dangers of “capitalist, bourgeois ideas.”

In 2009, at the age of 20, Ms. Yoon moved to China and lived there for two years before moving to South Korea in 2011. “To me, fashion is freedom and I left North Korea because I wanted to be able to wear what I wanted,” she said.

The Ministry of Unification in South Korea estimates that there are approximately 34,000 North Koreans who have crossed the border since 1998. Facing prison time or worse if caught, defectors typically leave through the south of China, traveling across Laos and then Thailand before reaching South Korea.

Some bring a small amount of clothes from North Korea, or pick up items in China, where they may have adapted to rural Chinese fashion. Ultimately, they enter South Korea more or less empty-handed.

Upon arrival, defectors spend up to three months being investigated by South Korea’s National Intelligence Service while living at an isolated building in the mountains. If they are approved, they move to a settlement support center called Hanawon, where defectors are taught the basics of banking, technology and shopping.

Part of this education often includes a field trip to a department store, where Hanawon students are given shopping money. Though North Korea reportedly has a handful of department stores stocked with Western brands for the 1 percent, the Hanawon trip is a first for most defectors.

Kang Nara, who lost all her clothes while crossing the Yalu River in 2014, said she remembered picking out a K-Swiss padded vest lined with raccoon fur, an item her teacher told her was stylish for kids her age. Ms. Yoon described the mall she attended, Shinsegae (meaning “new world”), as “an amazing, alternate world.” She recalled buying a pair of short cotton pajamas with frilled trim she had seen on the Korean drama “Stairway to Heaven.”

When they left Hanawon, all three of the women found that everyday South Korean life hardly resembled what they had seen on television when they lived in North Korea. Jihyun Kang, who defected in 2009, said it was the first time she really thought about the expenses of dressing well and found everyday South Korean style disappointing.

“The more I looked at clothes, the more I understood quality,” she said. “I wanted more beautiful things, but I couldn’t afford them. In Korean dramas, everyone wears colorful, expensive clothes and changes often, but in real life, it wasn’t like that at all.”

Kang Nara said she couldn’t understand why people with money dressed so plainly and that she had a hard time swallowing some trends her first year. “I was horrified by those low-hanging, Justin Bieber-style pants,” she said.

And as much as Ms. Yoon had looked forward to living in a world of options, she said learning how to shop made her anxious.

“Initially, I only knew about shopping at department stores and I assumed the best clothes were the most expensive clothes,” she said, adding that she thought touching something meant you had to buy it, and wasn’t sure if she was allowed to try things on. She couldn’t even imagine trying to return anything. “It was as if other people had permission to do these things, but somehow if I did it, everyone would look at me.”

While Jihyun Kang said she was too busy to think about fitting in during those first years, Kang Nara and Ms. Yoon admitted to feeling self-conscious about their clothes, and their status as defectors, who are often looked down on in South Korea. Ms. Yoon, in addition to hiding her North Korean background, said she tried to look and sound local.

“I sometimes thought about outfits I wore back home and how everyone told me I looked pretty in them, but I never let myself dress that way,” she said. “I made myself dress as South Korean as possible.” To understand what that meant, she spent hours on YouTube watching beauty tutorials and got fashion tips from “Get It Beauty,” a popular South Korean television show hosted by makeup artists and fashion-forward celebrities.

Kang Nara said she regrets many of her early fashion choices, like flamboyant yellows and pinks, blouses with studs, and T-shirts with large English letters on them. “I dressed the way rich people in North Korea dressed, which was their interpretation of how wealthy Chinese people dressed,” she said. Over time, she toned down and simplified her style, taking cues from South Korean celebrities including the actress Cha Jung-won.

“When people sometimes found out I was from the North, they would say they couldn’t believe it, and their surprise always felt like a compliment,” Ms. Kang said. “It made me feel satisfied about how I dressed — like I was a crow that had managed to go unnoticed among the doves.”

Modeling Your Story on Your Back

Social media has come to play an important part in helping defectors adjust to their new lives, especially YouTube, which some North Koreans have been using to help South Koreans understand their struggles. Over the past five years, several defectors have used the platform to speak about their lives back home and their experiences in South Korea.

Ms. Kang, one of best-known YouTubers in this genre, has built her channel on her persona as a North Korean fashion and beauty insider. While most of her content is lighthearted, she says in one video that she once considered going back to North Korea. “People tell me that I’ve done a good job resettling, but I had days when I wanted to go back home,” she says. “I overcame a lot to come here, and it turns out South Korea is a place where people work hard to live so that’s what I did — I worked hard to live.”

Ms. Yoon said she only recently decided to be upfront about where she is from. Graduating with a degree in fashion, getting a job in the field, and becoming more involved in the defector community have boosted her confidence.

The greatest fashion lesson she has learned since coming to South Korea is to “adjust the current trends to suit yourself, not try to copy what other people are wearing,” she said. She is enrolled in an entrepreneurship boot camp called Asan Sanghoe, and hopes to start a cosmetics line, focusing on the kind of vivid colors that would be prohibited in North Korea.

Jihyun Kang graduated from the same boot camp last year. In April she started a clothing line called Istory, for which she interviews North Korean defectors and then translates their narratives into images, which in turn get printed into elbow patches and sewn onto long-sleeved T-shirts.

A QR code on the shirt’s tag leads to a web page on the defector’s story: family backgrounds, childhoods, the escape from North Korea and future goals. The T-shirt representing Ms. Kang’s own story is an outline of Mount Paektu with an orange sunset in the distance.

“Fashion allows you to tell a story,” Ms. Kang said, adding that through her work she has met so many defectors who struggled in the North and continue to overcome so much in South Korea. “The more people know about these stories, the more room there is for change, and I want to play a part in that.”