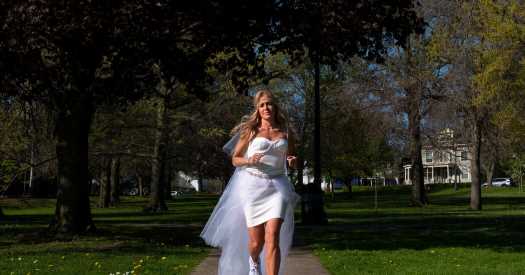 On May 17, at 9 a.m., Vanessa Reiser was in position, and all decked out in a $3,500 bridal dress from Lovely Bride in Manhattan specially designed for her first one-woman run through New York. The 285 miles, starting in Oswego, N.Y., and ending in Jay Hood Park, N.Y., would be completed over 12 days. For each of the nine counties she ran through, a donation would be made to a local domestic abuse shelter.

Ms. Reiser is not getting married; she has been married twice before (In 1998 for eight years and in 2013 for five years.). And in July 2020, she broke off her third engagement to a man she said was a narcissistic abuser.

Ms. Reiser, 48, a psychotherapist who lives in Congers, N.Y., said: “But I’m a strong girl. Once I got away and got my power back, I turned a corner. I’m proud to say that strong girl never left.”

Her decision to raise awareness to narcissistic domestic abuse in wedding attire was simple: “If I run in a white dress,” she said, “people might pay attention.”

The white wedding dress has long been a symbol of purity, femininity, and in the old days, virginity. It was worn to signify the start of a marriage in what one hopes will be a long, happy relationship, and thus life. Historically, it has remained one of the most iconic visuals.

Over the past several years, however, that visual has been changing. Women are purposely fashioning the white dress to bring awareness to a variety of issues and causes.

Ms. Reiser, a two-time Ironman triathlon competitor, got the idea to run in the dress while jogging near her home. “The white dress is a symbol of a fantasy,” she said. “In our culture, it represents a commitment we are brought up to think completes us. Narcissistic abusers use this to exploit women. I’m hoping when women see me run past them in the dress they will feel empowered. If they are in an abusive relationship, I hope they gain clarity, courage and confidence to move away from it.” 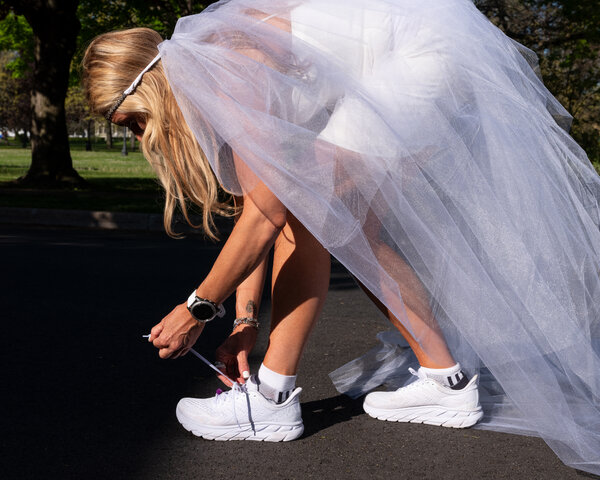 In the last year Ms. Reiser rebuilt herself, and her practice. She now focuses on narcissistic abuse and has more than 300 clients. She also co-founded Monarchs Coaching, a life-coaching program.

While some wedding-dress wearers are supporting larger calls to action, others are bringing attention to smaller happenings and celebrations.

On April 11, Sarah Studley got her vaccination at the M&T Bank Stadium vaccination site in Baltimore in her unworn wedding reception dress.

“During the pandemic, I only left my house to go grocery shopping,” said Ms. Studley, 39, a senior investigative counsel for American Oversight, a government watchdog group.

Like thousands of others, Ms. Studley’s original wedding was put on hold because of the coronavirus pandemic. Rather than have 100 guests gather at Spreckels Organ Pavilion, in San Diego’s Balboa Park, as originally planned for Nov. 14, 2020, she and her husband, Brian Horlow, had a microwedding Nov. 13 outside of the country administration center in San Diego with just six family members. “I had a beautiful reception dress I never got to wear,” she said. “It was a tough year for everyone. Wearing the dress was me trying to reclaim some joy.”

For the first time in half a year Ms. Studley did her hair and makeup, donned her good jewelry, put on an elegant pair of shoes, even reached for a dressy purse.

“Getting the vaccine is all about hope,” she said. “It was a ceremonial moment worth celebrating. It doesn’t mark the end of the pandemic, but I’m more protected than I was before and that’s something to celebrate as well.”

[Sign up for Love Letter and always get the latest in Modern Love, weddings, and relationships in the news by email.]

Ms. Studley said the response was overwhelmingly positive. “Seeing me in the dress resonated with people because this was me taking control over one tiny, symbolic thing,” she said. “I felt fancy and pretty. It’s a moment of hope; a signal to a brighter future. I wanted to celebrate that.”

It wasn’t too long ago, however, when wedding dresses were far less revered. After their weddings, some women chose to trash the dress and photograph themselves doing so.

“Essentially, these were a second set of photos taken of the bride, or the couple, where the dress is being destroyed, like the bride walking into a lake while wearing it,” said Amanda Miller, a professor of sociology at the University of Indianapolis. “It was individualized and personalized, the opposite of what we are seeing now. Today people are externally focused as opposed to being internally. We are very vocal about social causes.”

Ms. Miller also spoke to using a globally understood image as an attention grabber. “That’s what you want people to see and instantly understand when you’re trying to promote a positive cause,” she said. “Few things are more eye-catching than a wedding dress. And because we have spent so much money on this one item, there’s a desire to use it again. It’s upcycling for a good cause.”

For others, wearing the bridal gown is a larger movement, even a group effort.

“I have five bridal gowns, which is a lot for someone who has sworn never to marry again,” said Fraidy Reiss, 46, the founder of Unchained At Last, a nonprofit organization dedicated to ending forced and child marriages in the United States. In 1995, at the age of 19, Ms. Reiss, who was raised in an ultra-Orthodox home, was forced into an unwanted, abusive marriage for 15 years. In 2011, in an effort to help others in similar situations, Ms. Reiss, who lives in Northern N.J., started organizing events and protests with her nonprofit.

In July 2016, more than 35 supporters gathered for the organization’s first bridal gown chain-in. Black tape was placed across their mouths, plastic chains bound their hands as they stood in a sea of silence outside Penn Station in Newark.

“Anyone passing by knows this is about marriage, the powerful visual juxtaposition is impossible to ignore,” said Ms. Reiss, who added that 10 chain-ins have followed since in various locations, including Philadelphia and Boston. “The wedding dress is normally associated with something happy and celebratory. The tape and chains are jarring. They’re universal symbols of oppression and captivity.”

The pandemic put the chain-ins on hold, but social media and the political climate continue to spread their message, while supporters donate dresses and participate in events virtually.

“Putting on a bridal gown as a group and zipping up each other’s dress to tell the world to free others that are in this horrific situation as we try to change legislation is a very healing, emotional and powerful act,” said Ms. Reiss, whose nonprofit group is fighting to change the marriage laws for minors. “It’s become a hobby finding bridal gowns and altering them to fit. And I’ve worn all of them for a good cause.”

Child marriage remains legal in 46 states. “Since 2015, we have been pushing to pass legislation to ban marriage before age 18,” Ms. Reiss said. “So far our efforts have led to four states changing their laws; Pennsylvania, Delaware, New Jersey and Minnesota.”