Since John Jannuzzi began drinking water last month from a bulky half-gallon bottle with a protruding plastic straw, he’s taken measures to keep the mammoth contraption out of Zoom’s view. “I feel like a total baby,” said Mr. Jannuzzi, who is 35 and the founder of Jannuzzi’s Cookies. “I’m basically drinking from an adult sippy cup.”

The other day, though, the hulking contrivance slipped into his computer camera frame during a meeting, leading a business associate to ask him, “John, what the hell is that thing?”

The bottle he drinks from, all day long, is adorned by time stamps and aspirational messages (“11 a.m. — REMEMBER YOUR GOAL”; “1 p.m. — KEEP CHUGGING” and “7 p.m. — ALMOST FINISHED” among them) designed to get him drinking more water than he likely needs or certainly thirsts for. It has a sturdy plastic handle with finger grooves built in which allow you to get a firm grasp, like a barbell.

Mr. Jannuzzi, who lives in Brooklyn, noticed people on Instagram posting photos of their motivational water bottles and chatted with a few people who said that better hydration led to improvements in complexion and energy. This got him thinking about his own drinking habits: he guzzles water during and after his morning workouts but hadn’t been taking in much liquid in the hours after, aside from his nightly tequila on the rocks.

So he went on Amazon and spent about $40 for two half-gallon water bottles, one for himself and one for his girlfriend, Alex Rush, also 35.

“When you open the box from Amazon and first see it, you’re like, This thing is huge, you’ve got to be kidding me,” he said. “But after a week of drinking close to a gallon a day, my mood is better and I feel clearer.”

Mr. Jannuzzi’s ho-hum WFH days are now imbued with the novelty of binge water-drinking and frequent trips to the bathroom. “We have been inside for a year,” he said. “At this point, we’ll take what we can get when it comes to something new.”

This is a big moment for the “motivational hydration industry,” said Jason Holloway, 31, an entrepreneur in Fort Lauderdale, Fla., who, with Matthew Hernstadt, 32, started a company called HydroMate in 2019.

Back then, Mr. Holloway saw himself an H2O guy living in a soda-pop world. He wanted to help inspire people to more drink water; to motivate them to sip all day long. The idea, Mr. Holloway said, was “to create a bottle that turns the drinking of water, and the dread of drinking water, into a fun drinking game that you play throughout the day.” With time markings that are meant to keep drinkers on track to meet their goal and accompanying messages like “YOU’VE GOT IT” (10 a.m.) and “NO EXCUSES,” (4 p.m.), HydroMate bottles come in gallon, half-gallon and 32 ounce sizes, in an array of colors, ranging price from $19 to $23. They can be slung over the shoulder with luggage straps for on-the-go slurping.

“I’ve heard it from so many customers, ‘This bottle is so huge and I don't know how I’m going to do it. It’s noon and I’m only at 10 o’clock,’” Mr. Holloway said. “But the little friendly reminders really motivate you.” (He says his company has sold hundreds of thousands of bottles, no doubt with the help of social media endorsements from Chrissy Teigen, Kaley Cuoco and other celebrities.)

Danielle Prescod, a writer and a founder of the diversity, equity and inclusion firm 2BG, loves the motivational half gallon water bottle she bought from Amazon so much that she has become something of an Instagram water-drinking influencer.

In January, Ms. Prescod, who lives in New Orleans, began to realize how much her water consumption had diminished now that she no longer works in an office. Pre-pandemic, she said, “I would walk out of my office, fill up my water bottle and go to the bathroom several times a day, it was part of my routine to break up the work day,” she said. “But at home, I noticed I was drinking less water because I was less active, there was no real meal time, the whole concept of time and ritual had changed.” 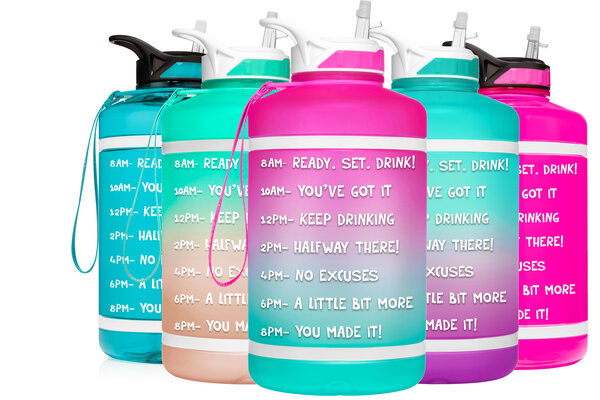 She felt she needed reminders to drink consistently so she searched “motivational water bottle” and made her $20 purchase. “I posted about it on Instagram, that I was doing competitive water drinking even though I am only competing with myself,” she said. “People started asking for the link to the bottle.”

Ms. Prescod, 32, earns affiliate fees for products ordered through links she shares. Since Feb. 1, she said that 1,200 water bottles have been ordered by her followers, who send photos that Ms. Prescod has collected in an Instagram “moment” page labeled, “Water Cult.”

Ms. Prescod said encouraging this habit helps distract from the bad news and political vitriol that has characterized the past year. “I think the reason it’s catching on so much is because it’s a healthy thing. Drinking water cannot be bad, it cannot be controversial in any way shape or form,” she said. (The only downside she has found is that her habit can interfere with work productivity. “I keep getting interrupted because I have to go to the bathroom so much,” she said.)

Carrying a particular water bottle has signified cultural cachet in America for three decades, said Anita Rose, a writer in Virginia who is an amateur historian dedicated to 1990s arcana and who sees bottled water and water bottles as pop-culture totems.

From Evian bottles littered around Shelley Long in the 1989 film “Troop Beverly Hills” to the Naya bottle tucked in the golden carrier of Alicia Silverstone’s character Cher in 1995’s “Clueless” to the Hydro Flasks favored by today’s VSCO Girls, “Keeping a bottle of water in hand makes it look like you’re healthy and it became a status symbol,” said Ms. Rose, 37.

The idea that a person should drink eight glasses of water a day (about a half-gallon), comes from nutritional recommendations issued more than 70 years ago, said Aaron Carroll, a professor of pediatrics at Indiana University School of Medicine who has written about health myths (and has contributed to The New York Times). Those recommendations accounted for water ingested from other sources like fruits, vegetables, coffee and even beer.

But drinking an additional gallon of water every day, or even a half a gallon, is neither necessary nor harmful for most people, he said. “For the vast majority of people, it’s not a terrible idea to drink a half-gallon a day,” he said, especially if the water ends up replacing sugary beverages like soda. “But the idea that you have to do it is somewhat strange and the main result will be that you end up peeing more.”

There are more economical ways of motivating your hydration than buying a bottle from Amazon. In August, Vandie Barnard, 30, a fitness and wellness coach in Woodbridge, Va., wanted to increase his water intake. His wife, Lakisha Barnard, 32, suggested that they make their own version of water bottles she had seen on social media. They went to the supermarket and bought gallon-sized plastic bottles of water and wrote encouraging quotes, like “Start Great” and “Be Greater” with a Sharpie pen on the bottles. They guzzled and refilled daily.

This helped them to get into the ritual of drinking a gallon a day. Now Mr. Barnard is teaching his clients to adopt the practice too, with their own inspirational quotes written on their bottles. “It helps that we’re all home because having to carry that bottle around could be a hassle,” he said. “But even if someone does go back to a normal routine, this has helped create a new habit and people can now apply that success to other habits they’re trying to develop.”

Falling short can be a source of shame — as it was for Brooke Hammerling who writes a newsletter called Pop Culture Mondays and who bought a motivational water bottle last winter but couldn’t bring herself to drain it consistently.

“Every day I was faced with the failure of the day before, when I would look at the bedside table and there would be my water bottle, half or a third of the way filled,” said Ms. Hammerling, 46.

From March until June, she stayed with friends and would fret over emerging in the kitchen in the morning with her bottle still filled to 4 p.m. from the day prior. “I would think, ‘Should I pour it out upstairs and try to make them think I finished?’” she said.

She decided the only thing worse than being water-shamed by a plastic bottle was lying about it. “I let them see my failure,” she said.