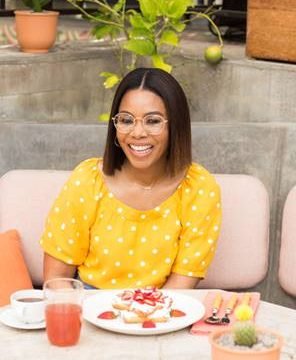 Regina Hall is kicking off summer in style!

The Hate You Give actress just teamed up with Old Navy for its new summer TV spot and campaign, modeling a line of playful, brunch-and-beach ready looks. And the best part? Every piece is under $50.

The 48-year-old actress stars in the new collection campaign — her fun-loving personality proves to be the perfect match for the comfy cute vibes of Old Navy. In the new brunch-themed commercial, Hall rocks her signature blunt bob and the adorable Gingham Midi Dress, available right now for just $44.99. Other collection standout pieces include the Printed High-Neck Lantern-Sleeve Blouse ($32.99) and the High-Rise Frayed-Hem Distressed Denim skirt ($32).

Hall tells PEOPLE exclusively that the gingham dress (which features a v-neckline and an adjustable wrap at the waist) is one of her favorites because it’s both cute and comfortable. She adds, “it’s my new print of choice.” The Old Navy collection also offers $40 espadrille wedges — a summer wardrobe staple — with a fun chambray twist.

When it comes to shopping, Hall admits that shoes (specifically, heels) are her weakness.

“I splurge a lot on heels,” Hall tells PEOPLE. “I feel like it gives me options. I can take the same jeans I always wear and pop on a shoe.”

Hall has also been busy promoting her new comedy Little (and making a name for herself in the fashion world along the way). At the film’s Los Angeles premiere last month, Hall opted for Ralph & Russo, a favorite of stylish stars Meghan Markle, Angelina Jolie and Rihanna. The silver gown incorporated a plunging neckline and a thigh-high slit, but thanks to expert styling (minimal jewelry and simple hair and makeup) the look was just the right amount of over-the-top.

Most recently, the Support the Girls actress made her big Met Gala debut in an on-theme Dapper Dan ensemble. She shared the inspiration for the gold and pink look in an interview with E! News.

Between press tours and red carpets, Hall is no stranger to an incredible designer gown. Still, the actress keeps it real. She told PEOPLE that the two things she just can’t keep herself from buying are actually “sweatpants and t-shirts.”

Back in March, Old Navy teamed up with Lana Condor for campaign in honor of International Women’s Day. At the time, Condor told PEOPLE that the powerful project was a “no-brainer.”