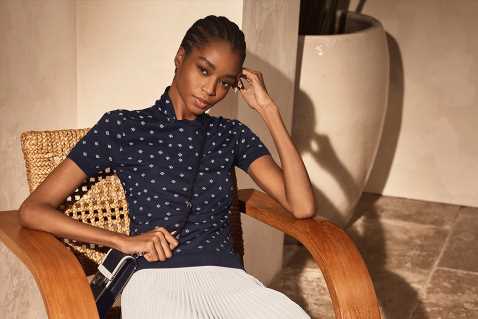 Ralph Lauren doesn’t seem too happy about a leader of its footwear and accessories divisions taking up a job with rival brand Tory Burch.

The company is suing Elise Schneider, according to state court records filed this week, who spent 14 years at Ralph Lauren as its vice president of footwear and accessories. Last year she moved on to Tory Burch, where she now heads up footwear for the brand.

But Ralph Lauren claims that the move is technically in violation of a six-month noncompete provision in her employment contract, as she left Ralph Lauren at the end of February 2020 and took up with Tory Burch the following month, a company allegedly listed as a competitor under the terms of Schneider’s employment contract. And Ralph Lauren claims that it had to demand the disclosure of Schneider’s new employer through a legal letter.

“Based on the fact that defendant commenced employment with Tory Burch less than six months from the date of her resignation, Ralph Lauren Corp. determined that she violated the noncompete and the company would exercise its rights under the claw back provisions of the agreements,” the company wrote in its complaint.

While Ralph Lauren is not attempting to end Schneider’s employment with Tory Burch, it is demanding that she be ordered to pay the company just under $80,000 for the value of vested stock shares she was granted over the course of her work with Ralph Lauren. It claims that repayment is a stated term of her employment contract, should she violate its provisions, including her noncompete period, along with confidentiality and nonsolicit agreements.

The company is basing the value of the shares on its stock price as of May 2019, when the shares vested and the stock was priced at $115.68. Currently, Ralph Lauren stock is hovering at around $119 a share.

“To date, defendant has refused and failed to repay the amount of the claw back in breach of her [restricted stock unit award] agreements,” Ralph Lauren said.

Schneider could not be reached for comment, nor could a representative of Tory Burch, which is not a defendant of the lawsuit, but is her current employer.

Ralph Lauren is going through its share of change lately, from staff to operations. Last fall, the company cut 15 percent of its overall workforce, or roughy 3,600 people, amid the coronavirus pandemic and plans to focus more on its digital business and continue limiting its investments in physical retail. The company also recently replaced its in-house agency creative director and lost to retirement its longtime women’s wear creative director, senior vice president and adviser Buffy Birrittella after 50 years with the company.