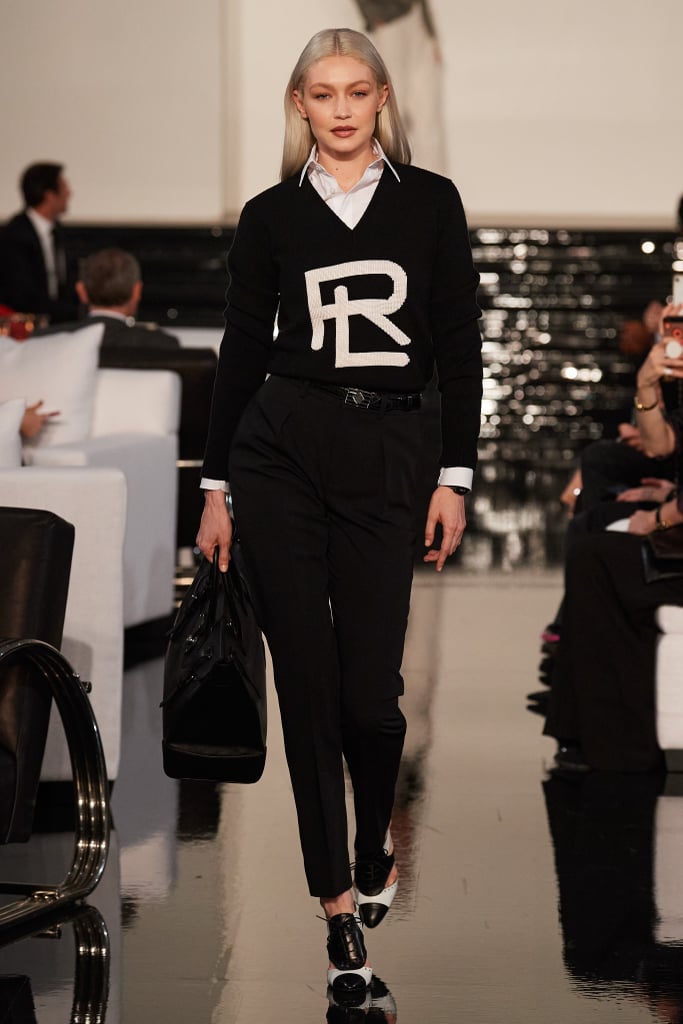 Gigi Hadid opened the Ralph Lauren fall 2022 runway show at the Museum of Modern Art in a polished black monogram sweater layered over a white collared button-down and tucked into matching trousers. The model’s look previewed the wardrobe the American fashion designer imagined for our eventual return to the office and to life as we knew it before the pandemic. This is perhaps why he devised the set in the style of his Manhattan residence, and had his star-studded crowd — including Angus Cloud, Lily Collins, and Janelle Monáe — lounging on sleek, black-and-white couches and chairs. Lauren is hopeful for a party-filled future, and many of his models offered up elegant dresses to match.

In fact, Hadid modeled one herself later in the show: a long-sleeved maxi gown with alluring midriff cutouts. More red carpet-worthy looks followed, including a jaw-dropping strapless red-and-black gown with a big bow trailing in the back. Bella Hadid also made an appearance on the catwalk, first in a belted suit ensemble involving a houndstooth print blazer worn over a white button-down and black turtleneck, and later in a white, asymmetrical column gown with a shoulder cutout.

Workwear was a focal interest of the collection, which proposed an elevated kind of office uniform. Think: tailored black-and-white suit separates — from pussycat bow blouses to double-breasted blazers and lapel coats — that would feature prominently on a dark academia mood board. Lauren’s revisit of his brand’s history also gave rise to several looks appropriate for equestrian activities, a series of fair isle sweater ensembles ideal for ski getaways, timelessly elegant red carpet attire, and the finale look — accessorized with a Yankees cap — was a nod to his childhood in the Bronx.

The fashion designer stuck to his roots, although his vision is now more inclusive after the racial reckoning of 2020. Thanks to a partnership with two HBCUs, Spelman and Morehouse Colleges, the brand will continue to tell previously untold chapters that center on the Black experience.

Ahead, view the stars who were in attendance and check out our favorite looks from the collection.