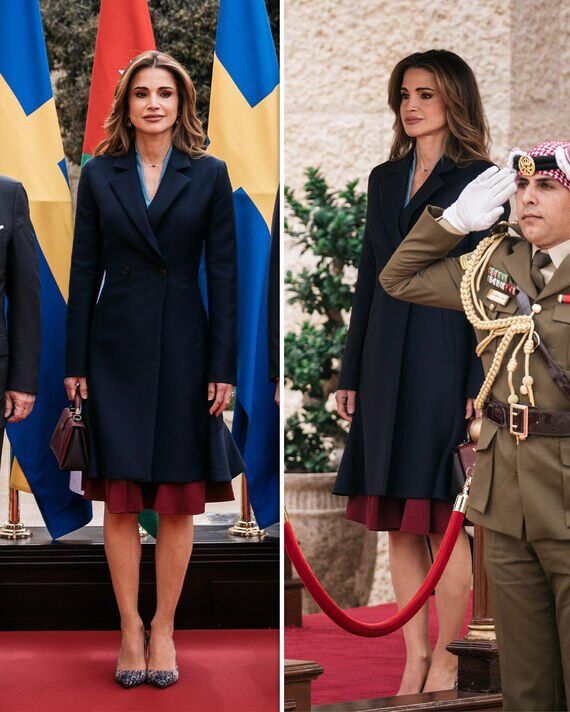 Queen Rania and her husband, Abdullah II of Jordan, welcomed the Swedish royals King Carl XVI Gustaf and Queen Silvia with an official ceremony to mark the start of their three-day State Visit to Jordan.

Queen Rania looked beautiful as we wore a flattering midi coat and a burgundy skirt underneath.

The navy coat looked amazing on the royal who combined it with a very stylish burgundy handbag from Bottega Veneta.

A pair of Manolo Blahnik crocodile pattern stilettos finished the Queen’s look today. Queen Silvia of Sweden, on the other hand, opted for a more colourful look.

She donned a fuchsia coat with a matching hat and a pink and yellow gingham dress underneath.

Queen Silvia opted for a dark brown handbag and matching pumps to finish her sophisticated yet daring look.

Another one @tasnimmughrabi commented: “Gorgeous!” and @yanethgadea added: “A real Queen!”

Royal watcher @anchajaya said the Queen of Jordan looked “so elegant” and @batoulalazzeh added: “You are born to be Queen!”

A Palace statement explained the official trip “affirmed the depth of the distinctive friendship between the two countries and the keenness to strengthen cooperation between them”.

According to the Jordanian Royal Court statement, the Swedish King described Jordan as a “historic and vital country” and said the Royal Families are bound by “close friendship” and “solid ties”.

The small handbag Queen Rania chose for today’s occasion is reminiscent of the Launer ones favoured by Queen Elizabeth.

Royal and fashion expert Miranda Holder explained the late Queen was rarely seen without one of her signature Launer handbags.

Queen Rania may have channelled Queen Elizabeth with her choice of handbag as it adds a touch of glamour to the occasion. However, she may also use it to communicate messages to the staff, just like the late British monarch did.

Queen Elizabeth wore her “iconic” miniature black handbag elegantly for years and it is believed she owned more than 200 of the brand’s bags.

Some of her favourites were the black leather Royale and the black patent leather Traviata.

The Queen loved the sophisticated black handbag which was also reportedly used to communicate messages to her staff.

Royal historian Hugo Vickers explained that if she passed her handbag from one hand to the other it meant that she needed help getting out of a conversation.

He explained: “It would be very worrying if you were talking to the Queen and saw the handbag move from one hand to the other.

“It would be done very nicely. Someone would come along and say, ‘Sir, the Archbishop of Canterbury would very much like to meet you’,” he told People