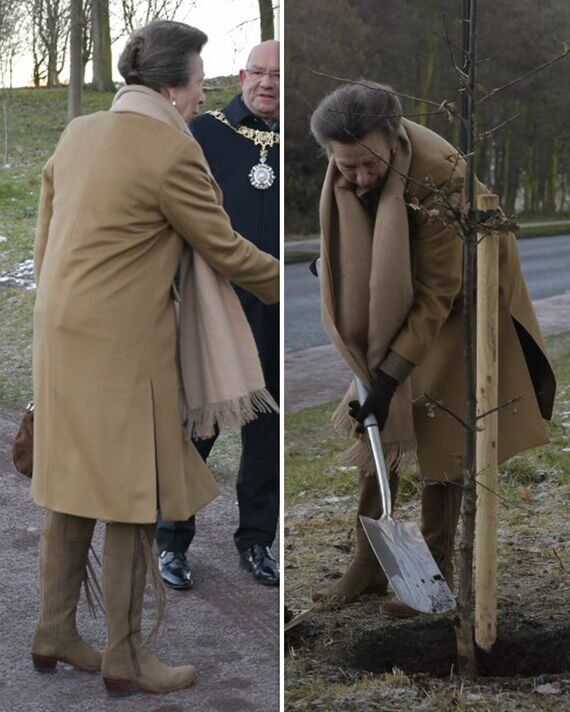 During her visit to Scotland, Anne planted a tree in the Queen’s Jubilee Wood, which would be the 70th tree in the wood. She also visited Lady Haig’s Poppy Factory to re-open the campus following its refurbishment.

“The Princess Royal joined representatives from @scotgov and HES to plant the 70th tree in the Queen’s Jubilee Wood, which was gifted to Her late Majesty last year.”

Poppy Scotland added: “We were honoured to welcome HRH The Princess Royal to Lady Haig’s Poppy Factory this morning to officially re-open the campus following its refurbishment.

“Our team enjoyed showing her the poppy-making process & new exhibition space, as well as our micro-museum Bud.”

For the outing, Anne was clad in a beige and brown outfit, and had chosen two scarves for the occasion – a wool one to wear outdoors, and a silk one to wear indoors.

Her wool scarf was beige, while the silk scarf was patterned and in various muted tones, such as brown, yellow, dark blue, light blue, and white.

Anne wore a long, brown coat with black buttons and an upturned collar.

Underneath the coat, it seemed that she was wearing a beige turtleneck jumper.

She completed the outfit with her unique, brown suede knee-high boots.

Unique because of the fringe element – the boots had long tassels dangling from their zips, similar to Cowboy boots.

The Princess Royal has similar boots in black, also adorned with a zip and tassels. She was seen wearing these to attend the Sovereign Parade at the Royal Military Academy Sandhurst in Camberley, Surrey, in December 2021.

Although different to her usual understated shoes, the tassel boots are an example of Anne’s experimental approach to fashion.

“The Princess Royal has an unusual relationship to fashion,” celebrity stylist Miranda Holder previously told Express.co.uk. “She certainly has never paid any attention to trends, and in later life has adopted a more frugal approach to her wardrobe than other members of the Royal Family.

“She often rewears old pieces time and time again, but it’s through this irreverence that she has become an unexpected style icon.

“Princess Anne has never been afraid to express herself, and has always possessed an inner confidence which allowed her to carry off any outfit with aplomb – all this contributed to her accidental trendsetter fashion status over the years.

“There are numerous photographs of her carrying off interesting new looks such as bright colours, polka dots and even turban style hats, which instantly became a sartorial hit and were then fully embraced by her adoring public.”

As for accessories, for her engagements in Scotland, Anne wore a gold brooch, pinned to the left lapel of her coat, and tiny gold earrings.

The royal has worn the earrings, which were diamond-shaped and dangling, on many occasions in the past

Anne completed her outfit with a brown suede handbag, which complemented her boots.

Royal fans were impressed by Anne’s business, with many deeming her “hardworking”. Twitter user @MsTex_87 wrote: “The Princess Royal shovels like she knows what she’s doing and she’s not afraid of a little hard work. I have so much respect for her!”

Robin Patrick added: “Love her and her husband. They are stoic, dedicated and hard working members of the Royal Family.”