A WOMAN has warned against lip injections after filler caused her to almost lose her lip entirely.

Gem Wilson, 20, from Cheshire decided to get lip filler at a clinic in Droylsden, Manchester earlier this month but her lip turned blue and almost fell off. 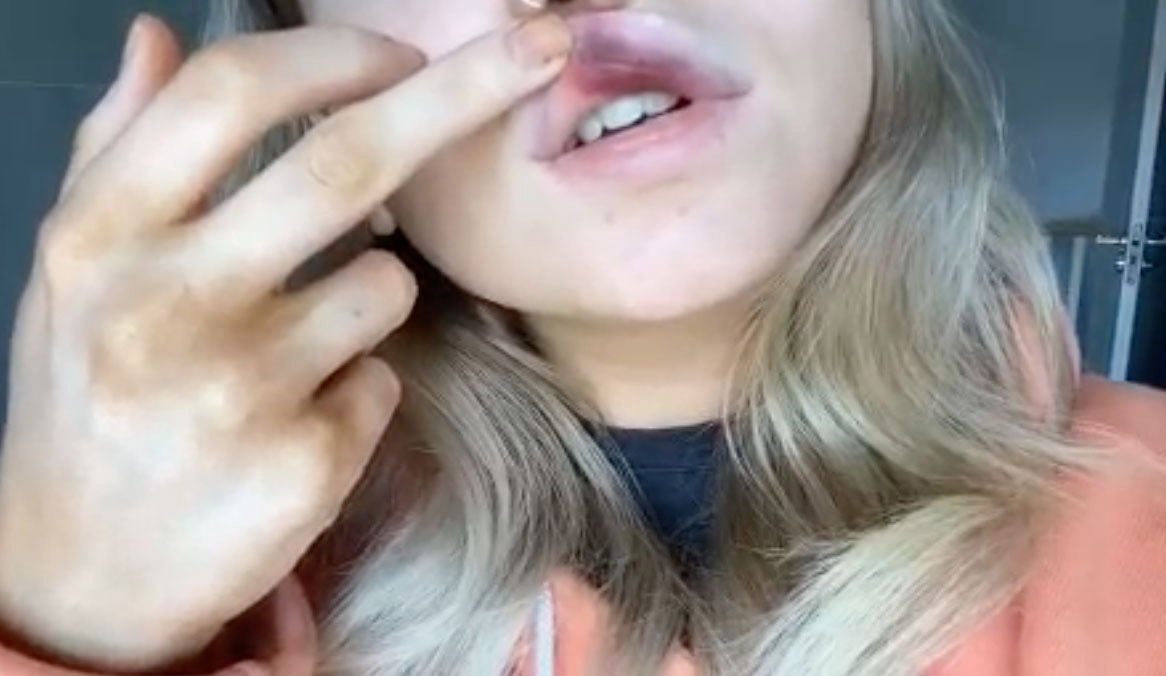 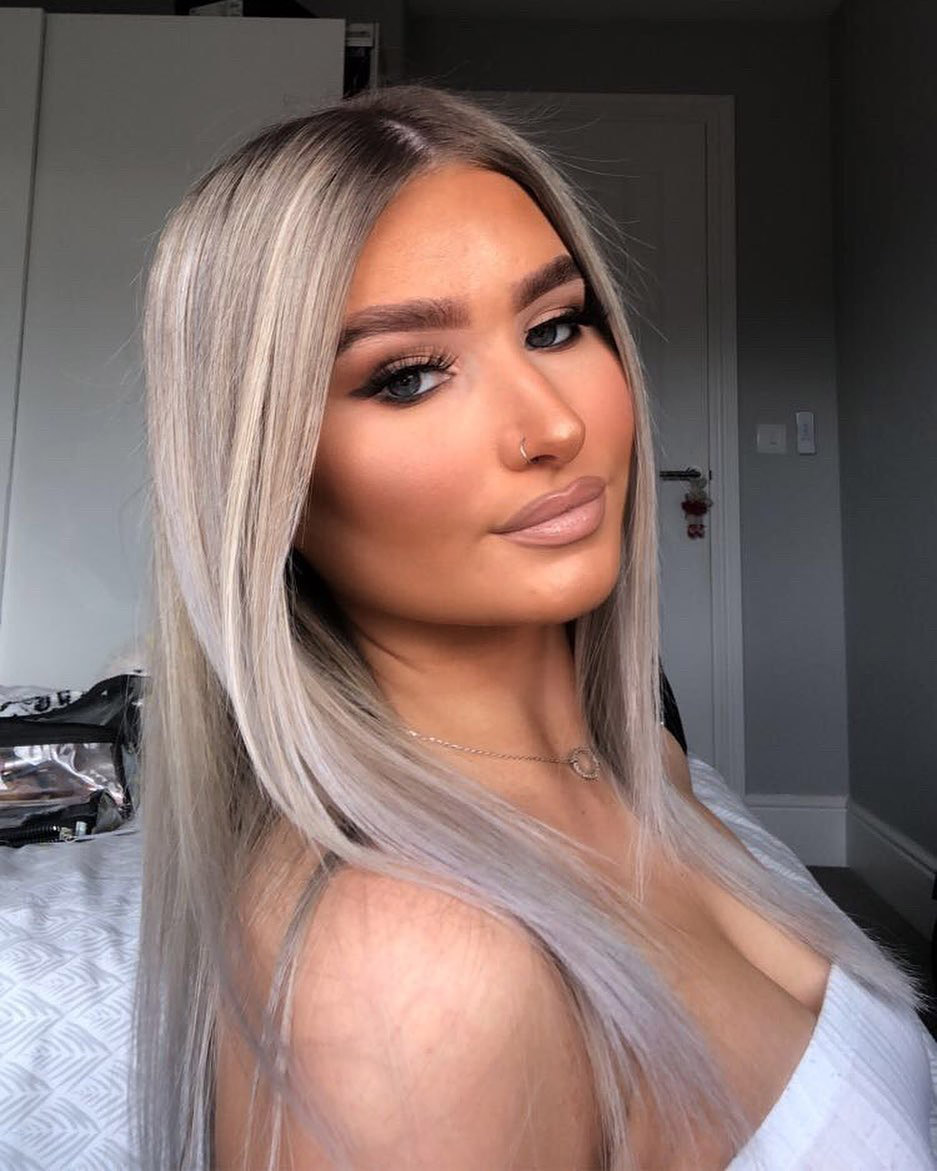 The university student was left with swollen and bruised lips after the procedure blocked a blood vessel which meant the blood supply to her lips was cut off completely.

Now she is warning other young women against the procedure which left her in excruciating pain.

Her lip swelled up almost instantly and a nurse quickly applied an ice pack, but insisted there was nothing to worry about.

Gem was told that the swelling would go down in a few days, but it only got worse. 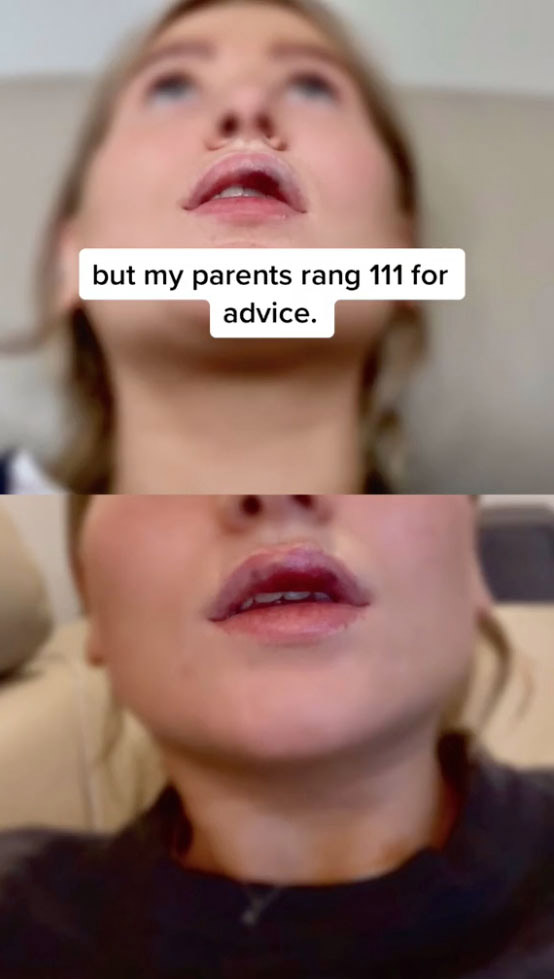 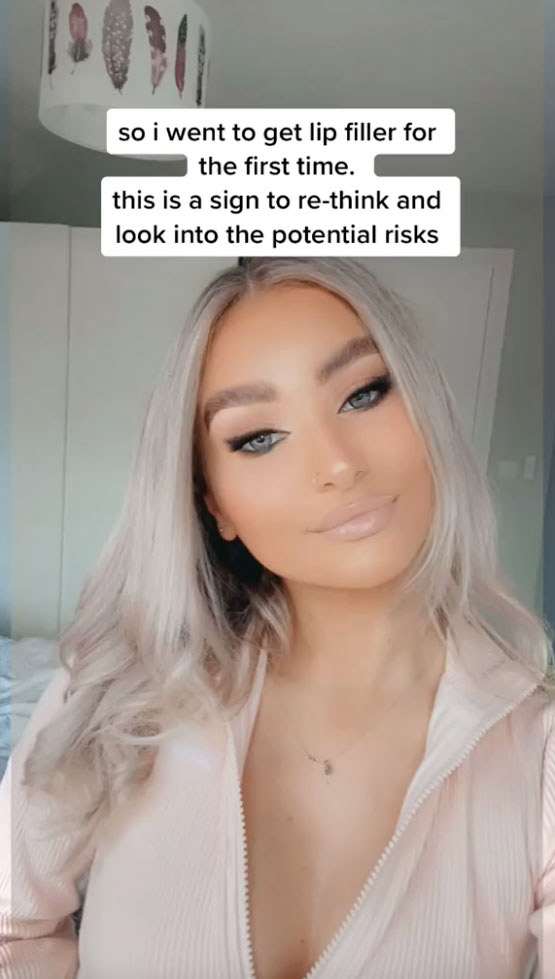 Just hours later, Gem’s lips turned white and grey, and felt extremely painful to the touch – and she knew something wasn’t right.

She said: "The nurse said that I had a hematoma bruise after putting the injection in my lip once and that I had nothing to worry about and it would go down in a few days.

"But my lip felt extremely big and swollen, it began to go white and grey so I immediately FaceTimed my parents when I was on the way home to see what they thought."

Gem, a criminology and sociology student, added: "My lips felt extremely swollen and stung a lot.

“It began to feel a bit achy and the size of my lip was getting bigger and bigger – It was extremely uncomfortable.” 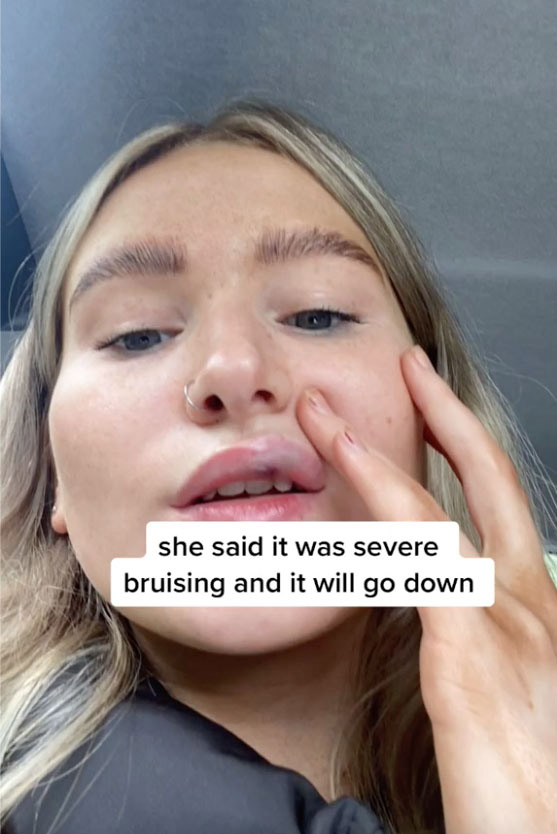 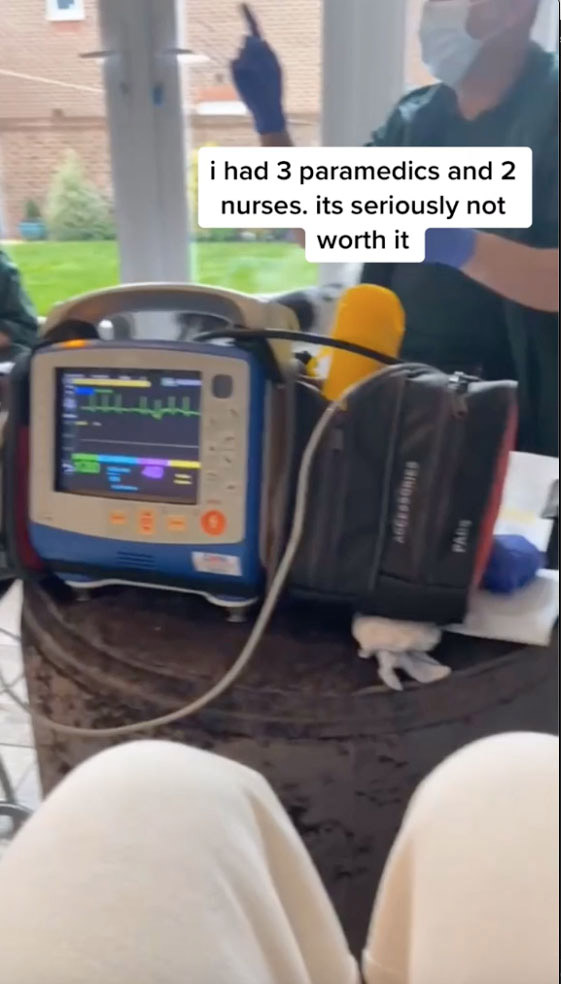 Already in excruciating pain, Gem’s parents called 111 and an ambulance was sent out for assistance.

She was quickly diagnosed with vascular occlusion, a condition where blood is no longer able to pass through a blood vessel in the lip.

The paramedics told Gem her condition was an emergency and the nurse from the aesthetics clinic was asked to come over with a 2mm injection of hyaluronidase, which is used to reduce tissue damage.

However, Gem claims she refused to do so and at first insisted that the 20-year-old go to the clinic, before the paramedics were able to convince her.

She said: "An ambulance came with three paramedics. Fortunately, one knew about lip fillers and immediately diagnosed me with vascular occlusion. 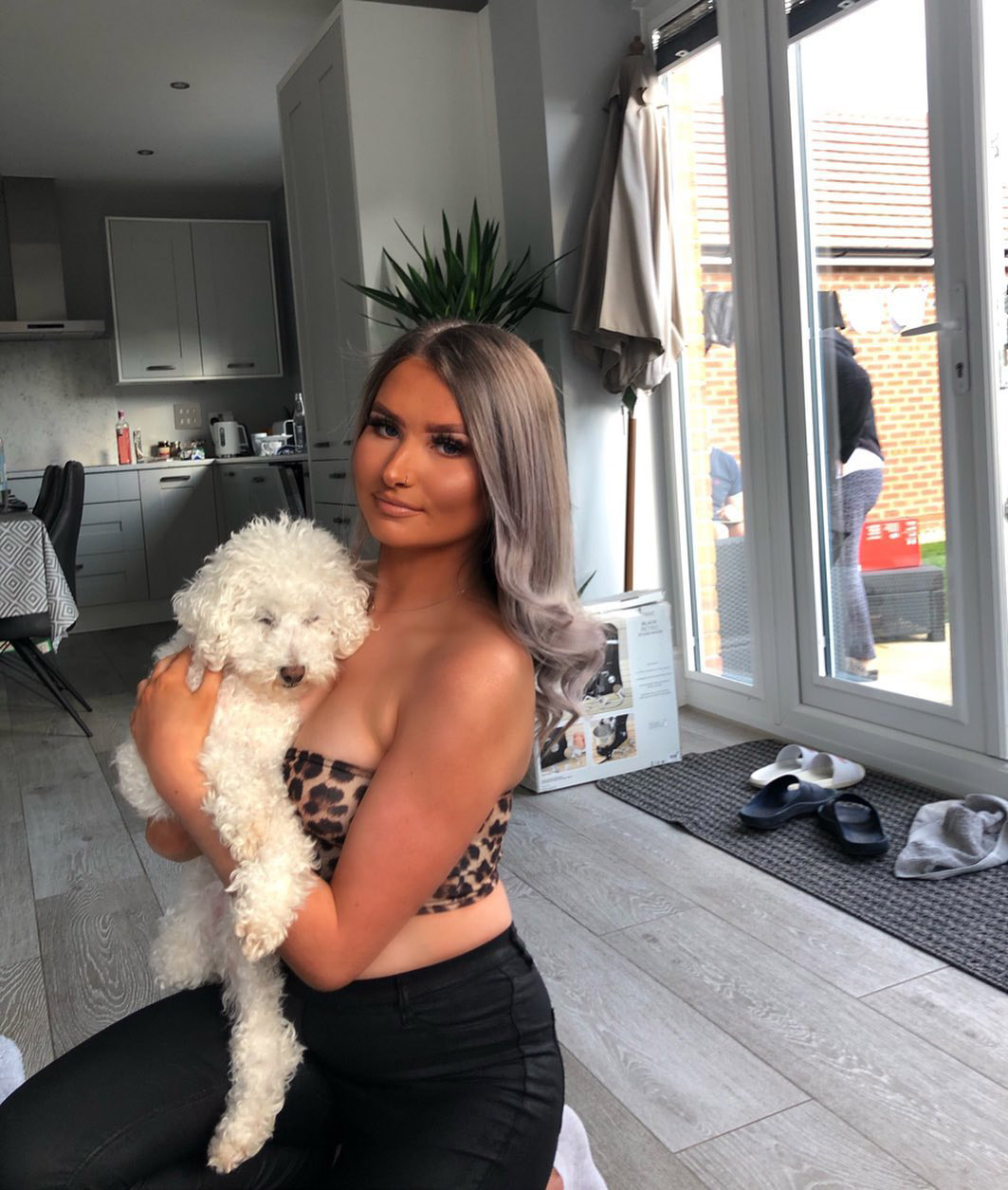 “Vascular occlusion is the most feared complication of aesthetic treatment and occurs when blood is no longer able to pass through a blood vessel.

“This paramedic rang my injector and explained that she must come to my house to inject hyaluronidase immediately, while the other two paramedics carried out tests to ensure I was okay.

“I was blanching and going blue around my mouth by this point."

Eventually, the nurse who had given her the fillers arrived at her home and Gem was given the injection.

“She injected 2ml of hyaluronidase to my swollen, bruised top lip," the student explained.

“This was excruciatingly painful and the numbing cream had worn off by now, causing this to be the worst pain I have ever experienced. 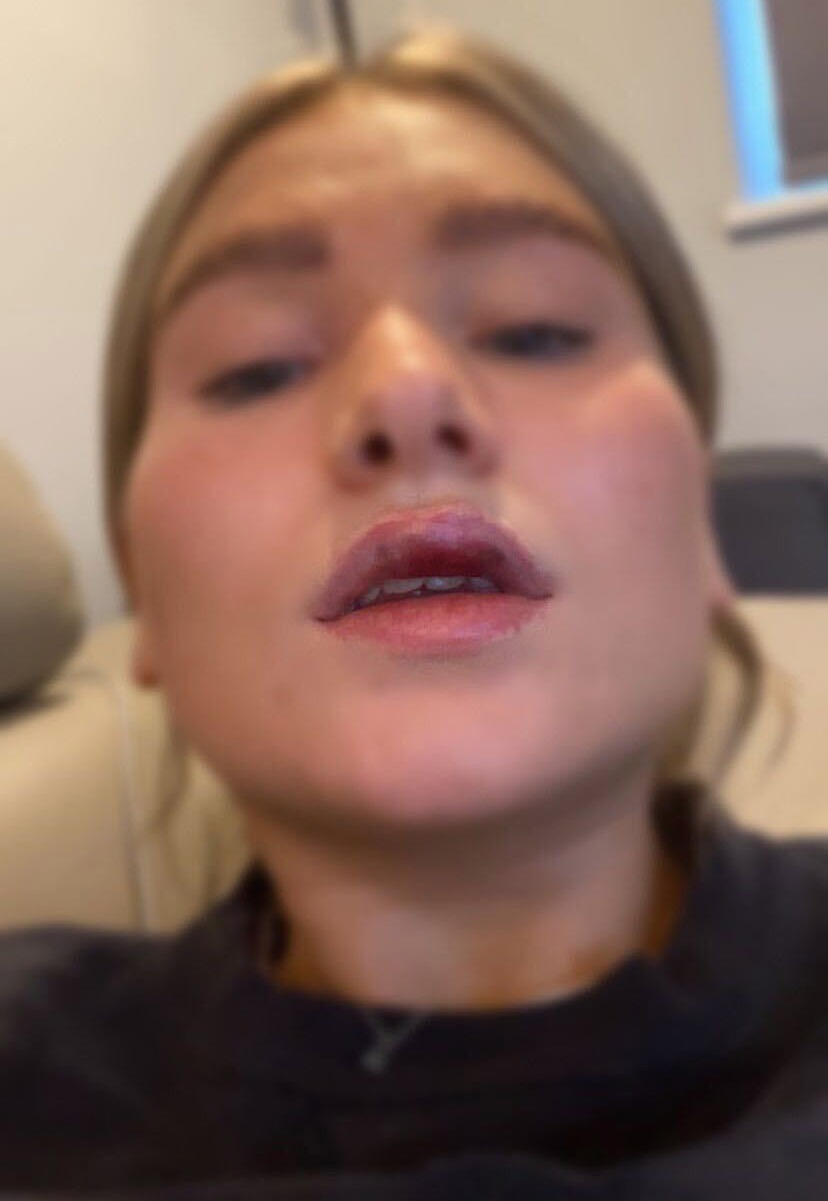 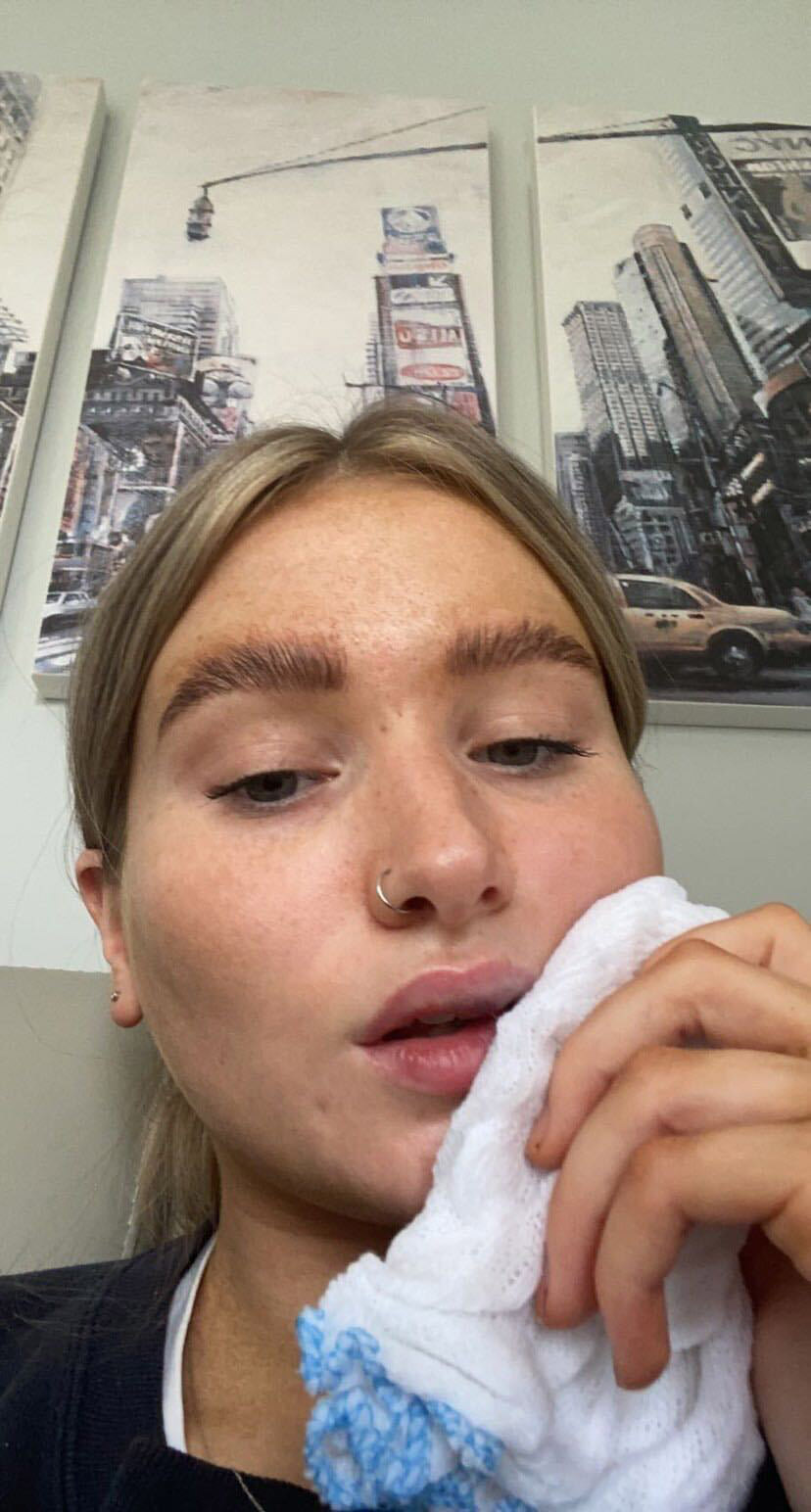 “The three paramedics stayed for multiple hours to ensure I was okay as my heart rate was high on the first test, and they wanted to watch over my injector to ensure she was doing it correctly."

Gem’s lips were badly bruised for over two weeks but are now back to their original size – however, she is still traumatised by the incident.

Gem detailed the incident in a clip on her TikTok page, advising users against getting lip fillers and to love their face just the way it is.

Her video has gained over half a million views and 37,300 likes as users praise the young woman for speaking out and warning others about the risks of the procedure.

What is vascular occlusion?

According to Mail Online, a vascular occlusion occurs when blood is no longer able to pass through a blood vessel.

It may be caused by an internal obstruction, such as a blood clot, or a foreign body, such as filler material.

The complication occurs when the dermal filler is either injected in or around the artery which results in the blood flow being reduced or stopped.

If this occurs, there will be an immediate blanching, which is when the tissue turns white and there's normally pain.

If no treatment is initiated to improve the vascular flow, the skin will start to appear blue, eventually turning black when surgery will be needed.

Treatments include injecting the area with Hyaluronidase, which dissolves dissolves Hyaluronic Acid.

“So sad that females feel pressure to put their selves at risk for things like filler etc. You are so beautiful before you didn’t even need that,” one person wrote. [sic]

“This video needs way more attention girls need to learn the risks of filler etc its so dangerous! I really home youre okay! Sending love,” someone else added. [sic]

“She blocked a capillary!!! Omg feel so bad for you,” another person said.

“Thank you for sharing this! I know you can get a lot of backlash with stuff like this so thank you for doing it anyway and looking out for others,” someone else added.

In a few words of advice to others who are considering lip fillers, Gem added: “I just want people to be aware of the major risks of lip filler.

“If you are insecure about your lips, like I was, please just give it more time and try to love the way you are.

“This has taught me a very harsh lesson, I could’ve lost tissue in my face and my lips completely if my parents didn’t act fast and ring 111.

“My injector insisted this wasn’t serious and I was going to be fine, if I had trusted this then I would be having surgery now to re-construct my face at the least.

“But if you go ahead, then please understand and know the risks so if this happened, you would know immediately.

“With the right practitioner, you are in safe hands.”

Meanwhile, a woman has told how she hated her big boobs so much that she begged her parents for a $10k reduction at 17 – she said that gross older men constantly perved on her.

In other surgery news, we shared how this woman spent £24k turning herself into a real-life Barbie.

Plus, the stars who are ditching their lip fillers and embracing a more natural look – from Molly Mae Hague to Gemma Collins.