A MUM-of-two lost her entire nail when it was ripped off following a manicure – and says the pain was worse than childbirth.

Toni Little, from Fife, Scotland, lost her natural nail after she accidentally sat on her hand following the beauty treatment. 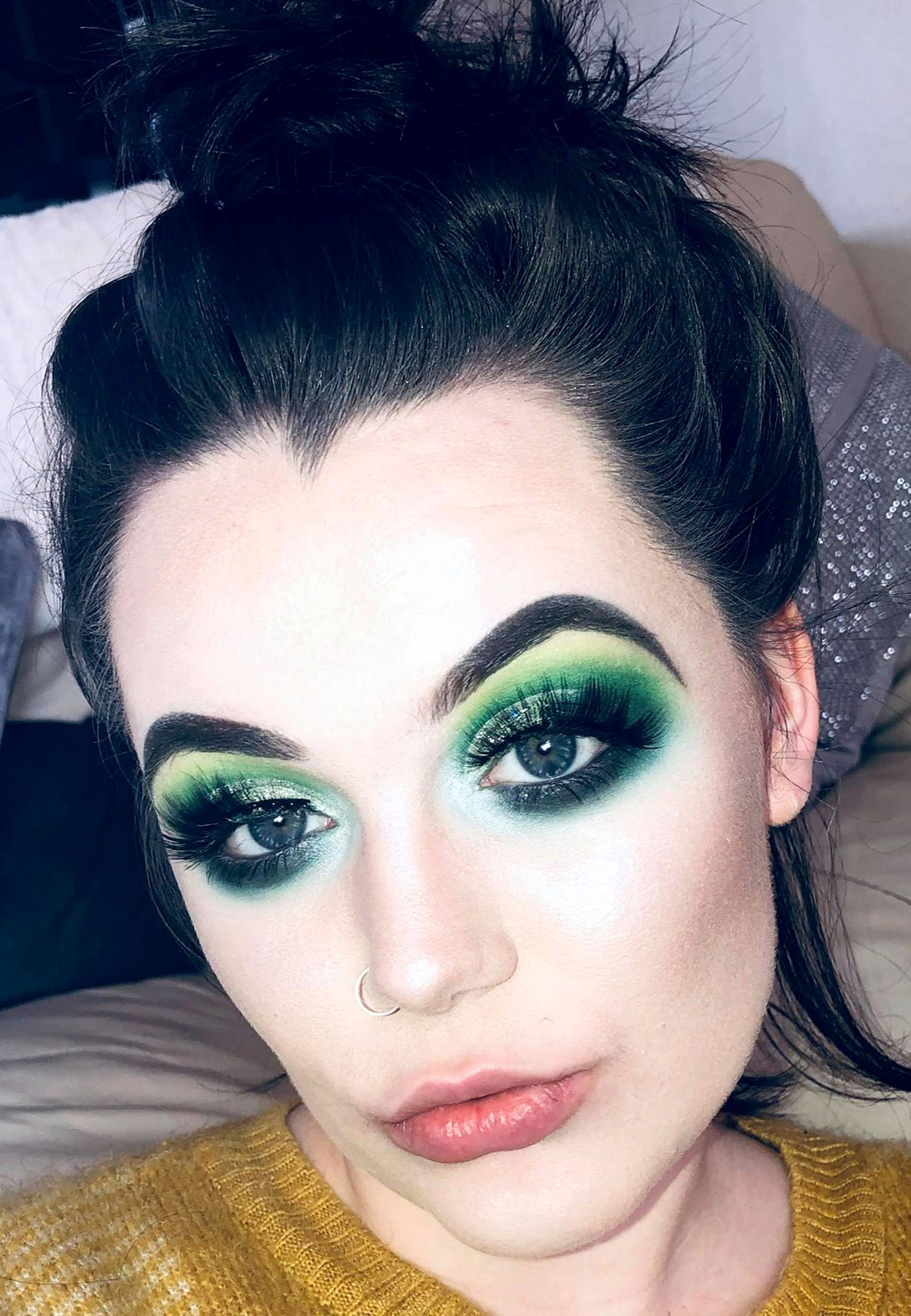 The 25-year-old claims the salon used super strength glue to attach the acrylics, which were long red talons with glitter.

The mum two little girls, aged four and two, said: “My full nail came away from my nail bed. It was awful.

“I’d never get them done again and I wouldn’t recommend it for anyone else.

“I’ve had two children and I’d rather go through labour again. 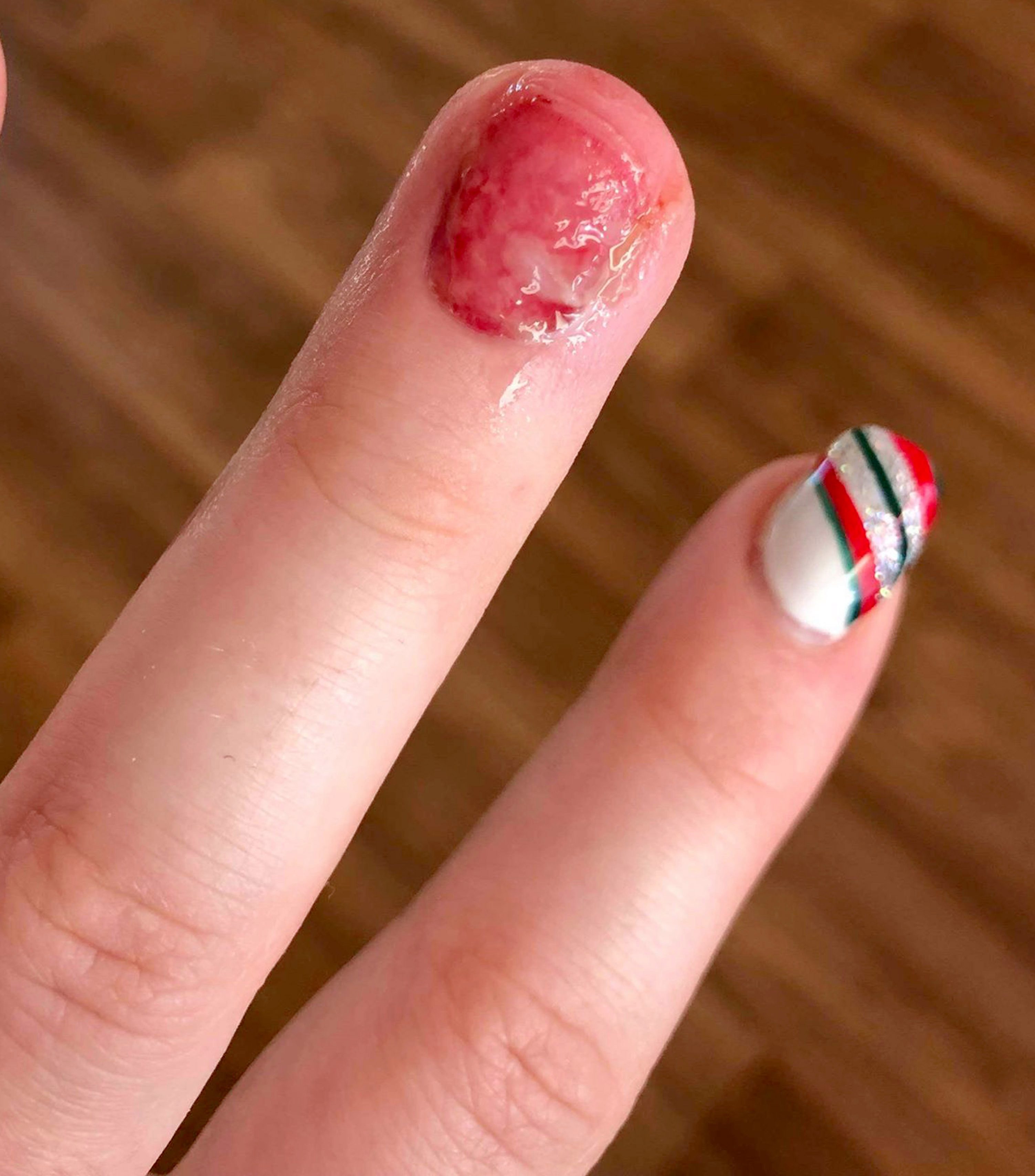 “It was the most painful thing I have ever experienced.

Toni says the strong adhesive caused the entire nail – from her nailbed – to come off when she accidentally sat on the tip a few weeks later.

The warehouse operative said: “I know if you put too much pressure on the tip it can snap.

“I just sat on my hand awkwardly and my full nail came away from my finger, there was just flesh.

“I got the instant pain straight away.” 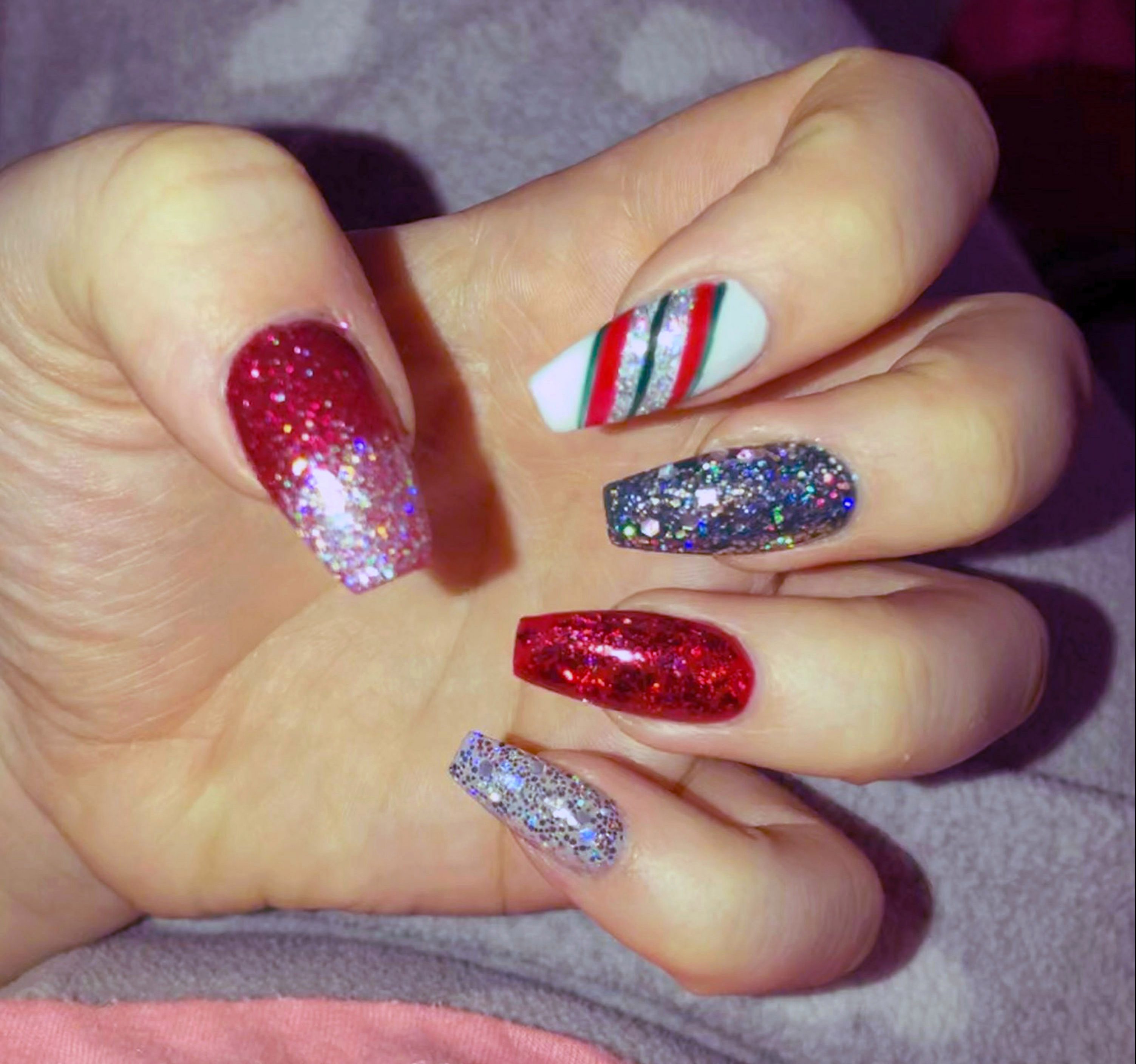 She rushed to the doctors where they advised her the nail may never grow back.

Toni had to keep her finger wrapped up for three days, leaving fiancé Arron, 27, on nappy duty.

Despite being told her nail may never recover, nine months after the incident it has begun to grow back.

Toni said: "I was lucky that the nail grew back but it's so weak and frail and the regrowth was so painful.

“My nail is absolutely ruined.” 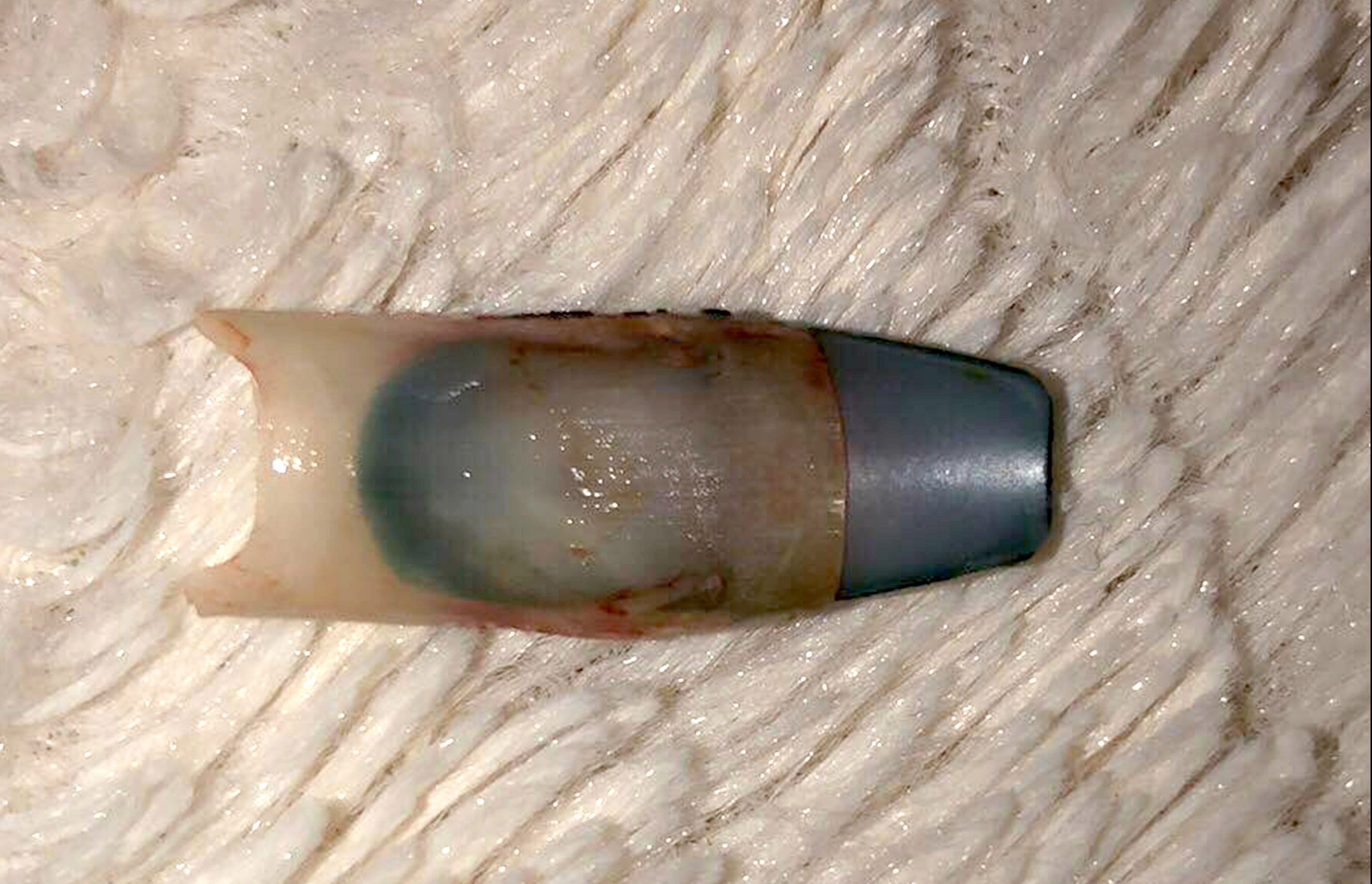 Before losing her nail Toni was a fan of acrylics, but has vowed to never wear them again.

She’s sharing the graphic images of her broken nail in a bid to warn others of the danger.

Toni said: “I would never get acrylics done again and I wouldn't recommend anyone to get them. People should stay well away from them. 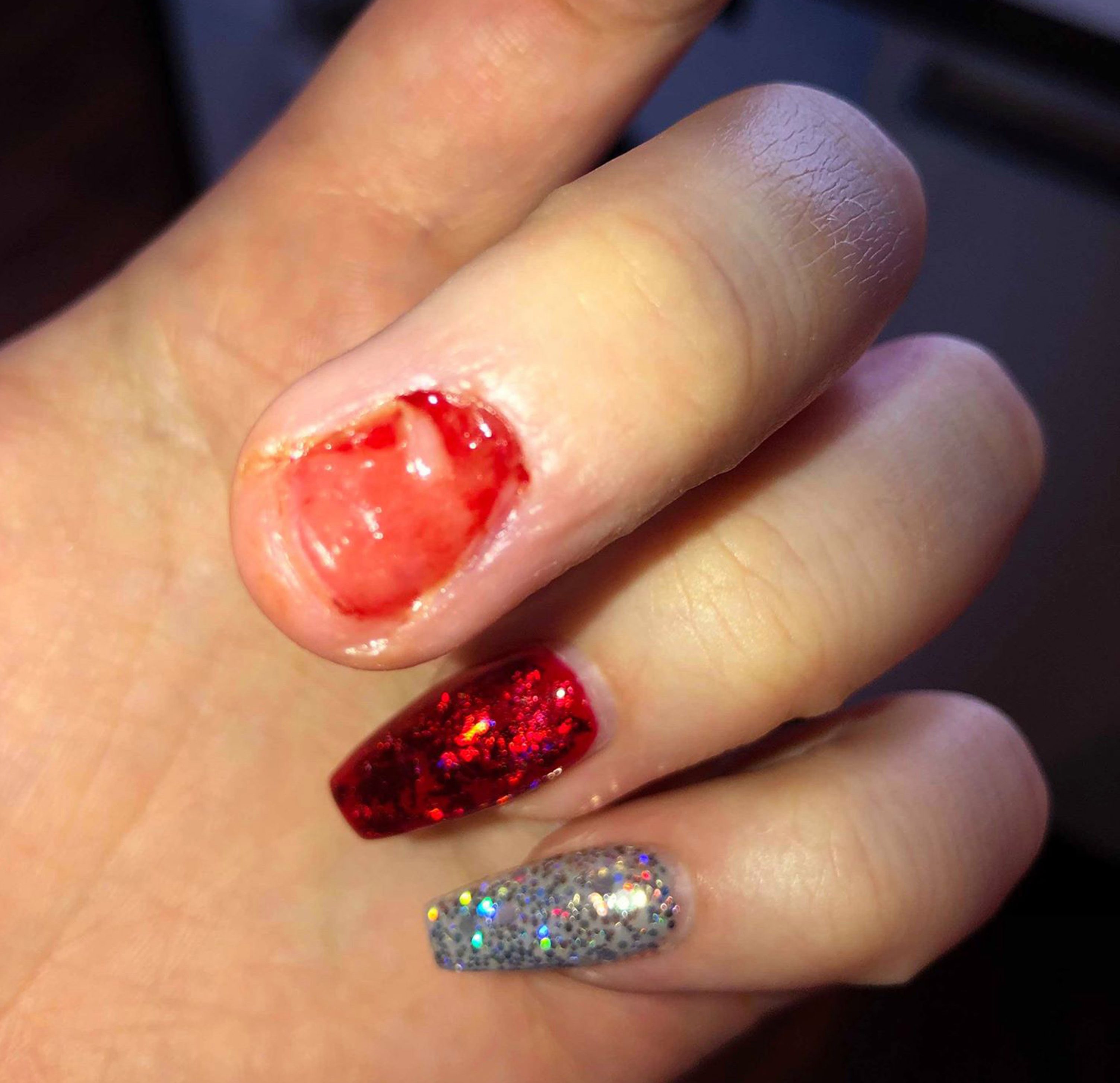 "It's just not worth it. The pain I felt for month was just sickening. Even if I just banged it, it was so sensitive. My husband hated seeing me in so much pain.

"My nail will always have nerve damage and acrylics can be so dangerous for your nails. It stops them for breathing and makes them so fragile.

"I only lost one but the rest are only just getting back into good condition nine months later."

Plus lipstick shaped nails are the latest beauty trend to sweep social media.

Meanwhile the world’s first nail varnish remover cream is here, and it takes off your polish in minutes.

In other news, a bride showing off her sparkling engagement ring left people distracted by her 'rotten' nails.