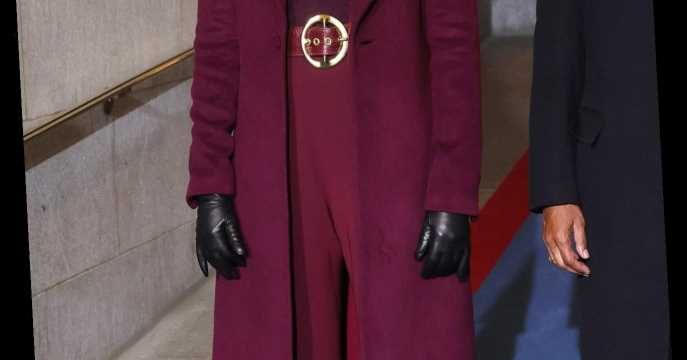 Former First Lady Michelle Obama is known for making powerful statements through fashion, and the bold-hued, belted look she chose to wear for President Joe Biden's historic inauguration was no different.

Often championing Black, female and immigrant designers in an effort to give them a platform, Michelle, 57, chose a monochrome look from Black American designer Sergio Hudson.

As she walked hand-in-hand with husband and former President Barack Obama, 59, down the steps of the Capitol, Michelle looked straight out of a high-fashion editorial in a perfectly tailored turtleneck teamed with flare trousers and accessorized with a gold oversize belt, a Sergio Hudson signature accessory. She topped off the look with a floor-length coat in a similar plum hue, black leather gloves and a black protective face covering. Americans immediately praised the former First Lady's inauguration look on Twitter. "I gasped when I saw @MichelleObama," one person tweeted.

Purple has been the color of choice at the 2021 Inauguration, with Vice President Kamala Harris selecting a royal-hued ensemble by Christopher John Rogers, and former First Lady and Secretary of State Hillary Clinton wearing a purple Ralph Lauren Collection suit.

The color holds special meaning, as its known as a symbol of bipartisanship (the shade is a combination of blue and red — the colors of the Democrat and Republican parties). Earlier today, Michelle posted a throwback photo from President Obama's inauguration over a decade ago along with a message about her hope "for what's to come."

"Today is the day. After a disturbing era of chaos and division, we are entering the next chapter of American leadership with the inauguration of @JoeBiden and @KamalaHarris. Right now, I'm feeling more than just relief at putting the past four years behind us," Michelle said.

"Joe Biden and Kamala Harris are the kind of leaders our nation deserves—decent, hardworking people who reflect the best of our values. Most of all, they're guided by empathy, honesty, and a willingness to put the needs of our country before their own. They're determined to make life better for all Americans, and I know they will bring us back the stability that has been sorely lacking through what has been a devastating pandemic. Not to mention, we'll have terrific examples of leadership in @DrBiden and @DouglasEmhoff, as our new First Lady and Second Gentleman," she continued.

"It's no secret that the work ahead will be challenging. And no one person, even a president, is capable of waving a magic wand and fixing the problems that persist in this country. But this past year I've seen folks from all over America step up like never before, whether it was peacefully protesting against racial injustice, registering first-time voters, or simply making sure a neighbor could safely get their groceries. It feels like we might finally be getting some momentum," Michelle said. "And with @JoeBiden and @KamalaHarris in the White House, we can once again start thinking about building the future we want for ourselves and our children."

Biden and Harris took the oaths of office around noon eastern time, officially becoming the next president and vice president of the United States.