El Espace is a column dedicated to news and culture relevant to Latinx communities. Expect politics, arts, analysis, personal essays and more. ¿Lo mejor? It’ll be in Spanish and English, so you can forward it to your tía, your primo Lalo or anyone else (read: everyone).

When Claudia Mendoza was growing up in the Washington Heights section of New York, she and her parents often spent their nights at El Club Deportivo Dominicano, a social club four blocks from Mendoza’s childhood home. There, she would twirl across the dance floor to the sounds of a live merengue típico band.

“The dance floor was always packed with all sorts of people” spanning generations, she recalled. Mendoza’s mother explained that the club was “an engine for our community,” where people raised money for local entrepreneurs, organized politically or planned community events.

She loved going there, but she couldn’t help but notice one glaring omission: The club was dominated by men. There were men’s photos hanging on the walls, and men always served as the club’s president.

Her memory of these images were, in part, what inspired Mendoza, 26, to create a space of her own in 2018: the Mami Chula Social Club. One year later, the club, based in Uptown Manhattan, has amassed more than 700 members, known as chulas.

A germ for the idea sprouted in summer 2017, when Mendoza organized a kickball game with her girlfriends, who played against each other in matching pink T-shirts. The women were excited to “have an opportunity to be competitive, to play a sport, to be angry, to do something totally different from their routine,” Mendoza said.

But things clicked when she hosted another event, this time including their mothers. The single Dominican moms had become empty nesters, confronting the reality of rebuilding their social lives in middle age. In 2017, Mendoza planned an elaborate Mother’s Day dinner for which daughters wrote poems for each of their mothers, who then kept meeting for biweekly brunch dates. 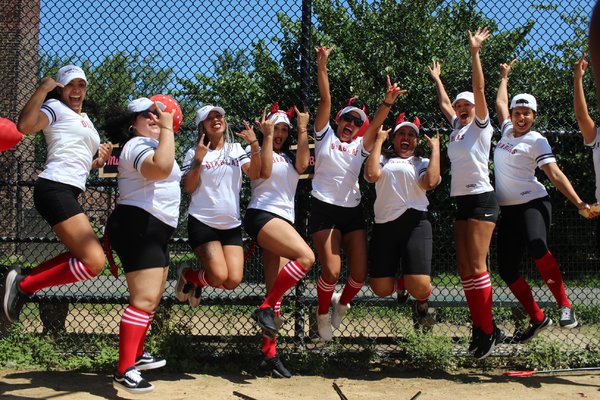 This intergenerational event got her thinking: Why not create a private club exclusively for people like her friends and their mothers? “I wanted to continue creating community for women,” Mendoza said, so she left her job in June 2018 and officially began the Mami Chula Social Club that September.

In lieu of typical networking happy hours or professional development panels, the chulas’ monthly programming is quirkier and more adventurous. Mendoza has hosted cigar and whiskey pairing lessons, women’s history month cosplay dinners and a “twerkshop” choreographed by one of Cardi B’s backup dancers. As Mendoza put it: “We’re not trying to cater to the perfect cookie-cutter girl or the Instagram girl. That’s not what we want to do.”

Instead, Mendoza is committed to making the Mami Chula Social Club accessible to immigrant and working-class women, giving them entry to events from which they might otherwise have been excluded. The inaugural event was a garden party honoring its members’ mothers, held at the Heights’ historic Morris-Jumel Mansion, a national landmark and the oldest house in Manhattan. The soirée also featured harpists and a meal catered by a celebrity chef.

“Our women didn’t have these spaces and if we did, they were very exclusionary and only catered to educated or professional women, not women like most of our mothers,” Mendoza said. She keeps costs low — applications are free, and there are no annual dues. Tickets for monthly events typically run between $20 and $40, and Mendoza collaborates with Mami Chula members for all aspects, from photography to food vending.

While women’s clubs have a long history in the United States, the current renaissance is headed up by ventures like The Wing, a network of chic, Instagram-worthy co-working and community spaces. Over the last year, The Wing has encountered some criticism because of its price tag (the cost of an annual membership can go up to $2,700). For many women, dues this steep can be out of reach — a reality that has raised concerns about the exclusionary nature of so-called corporate feminism.

Mendoza hopes to welcome an intergenerational spectrum of women from all walks of life. Members include stay-at-home mothers, lawyers, artists, writers and bartenders, but Mendoza says they share a universal belief in the intimate and communal spirit of the group. Last year, they partnered with the photographer Evelyn Martinez for Getty Images’ Nosotros Project, collaborating on a photo shoot of members’ mothers and grandmothers, inspired by the inaugural garden party event at the Morris-Jumel Mansion. And for their monthly book club, they recently read “Chula,” by Amanda Alcántara, a Dominican writer.

“We had 60 women talking about trauma, about colorism, about healing,” Mendoza said. “We were crying and supporting each other. These are the types of spaces we want to create and the types of conversations that our community needs, that unfortunately you’re not going to have at a professional development panel.”

With its ranks growing, Mendoza envisions a promising future for the Mami Chula Social Club. “I want Mami Chula to expand across the nation and create community for women in different states,” she said.

Until then, Mendoza is eager to continue uplifting the women of her neighborhood. She hopes to secure a physical space soon, especially as gentrification in the neighborhood surges and increased rents threaten the remaining old-school Dominican social clubs in Washington Heights. Members have expressed interest in more educational activities, as well as smaller interest-based offshoots.

”I really want to stay true to the ‘why’ of this community,” Mendoza said. “I always want to stay grounded in that.”

One of our reporters visited Altagracia Alvino, the baseball player Vladimir Guerrero Jr.’s grandmother, as she made Dominican goat stew for her grandson and his team.

A step forward for representation: Vogue México y Latinoamérica featured four (!) Afro-Dominican models on the cover of its September issue.

A study released this week found that Latino actors are still underrepresented in Hollywood. Only 3 percent of the lead or co-lead roles in the 100 top-grossing films from 2007 to 2018 went to Latinos.

Mild head injuries are common in active children, but in our Opinion pages, a lawyer writes that black and Latino parents are more likely than white parents to be investigated for child abuse when they take their children to the hospital.

How “Dora and the Lost City of Gold” strove for indigenous cultural authenticity. — Concepción de León

What else do you want to see in El Espace? Let us know: [email protected]