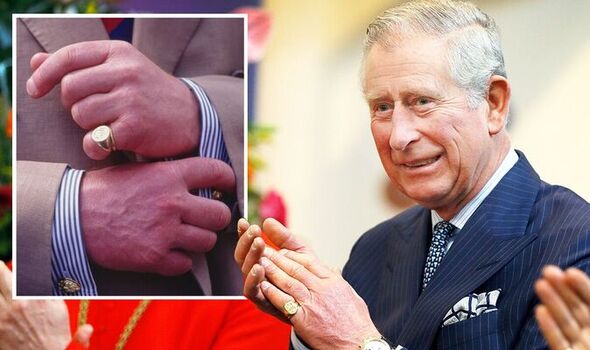 The British Royal Family own an abundance of jewels; from multi-million-pound tiaras to diamond suites, their collection is globally renowned and includes some of the world’s finest gemstones. While some pieces are more well known than others – Kate Middleton’s engagement ring that originally belonged to Princess Diana – one piece that not many know the meaning of is King Charles III’s signet ring.

The King has been photographed wearing a gold ring on his smallest finger since the mid-1970s.

Jewellery experts Steven Stone took a look at the ring and gave their thoughts.

On closer inspection, the ring is made from gold, likely to be Welsh gold.

Members of the Royal Family have been using Welsh gold to create their wedding bands since the Queen Mother married the Duke of York in April 1923.

The Welsh gold is thought to be taken from the Queen’s collection from the Clogau St. David Gold Mine in Dolgellau, Wales.

In terms of design, the ring is engraved with the Prince of Wales symbol – a role Charles proudly spent 64 years in.

As for what signet rings mean, they are associated with a symbolic family heritage.

Signet rings were created and used to mark documents – the face of the ring usually bore a family crest and would be pressed into hot wax.

King Charles’ signet ring was not made for him, it was passed onto him by his uncle, Prince Edward, the Duke of Windsor.

Prince Edward was also the Prince of Wales before he ascended the throne, so the ring dates back 175 years.

Maxwell Stone, the creative director at Steven Stone commented: “It is widely known that King Charles has owned and worn this same signet ring since the 1970s, the bezel distinctly engraved with the crest of the Prince of Wales.

“This signet ring is likely to be made with Welsh gold, a royal tradition, carrying a weight of approximately 20g.

“Nowadays, signet rings are commonly worn as heirlooms, having been passed down through generations.

“A signet ring like the King’s is likely to retail at approximately £4,000.”

It can be presumed King Charles’ signet ring will be left to Prince William, the new Prince of Wales.

As for what other jewellery the King wears, despite being married to Queen Consort Camilla, he doesn’t wear a wedding band on his fourth finger, but there is a gold band that sits behind his signet ring.

According to British and European royalty expert Marlene Koenig, “there is no royal tradition for men wearing or not wearing a wedding ring”.

Prince William also doesn’t wear a wedding ring, he is reportedly not a fan of jewellery.

When Prince Andrew married Sarah Ferguson, he also chose to not wear a ring, and Prince Philip, who was married to Queen Elizabeth II for more than 70 years also never wore a ring on his wedding finger.