A DOG owner has divided opinion after revealing she has dyed her dog bright red.

TikTok user Chloe, who runs the @danthebigreddog account, shared why she decided to change the colour of her 130-pound Great Pyrenees Dandy. 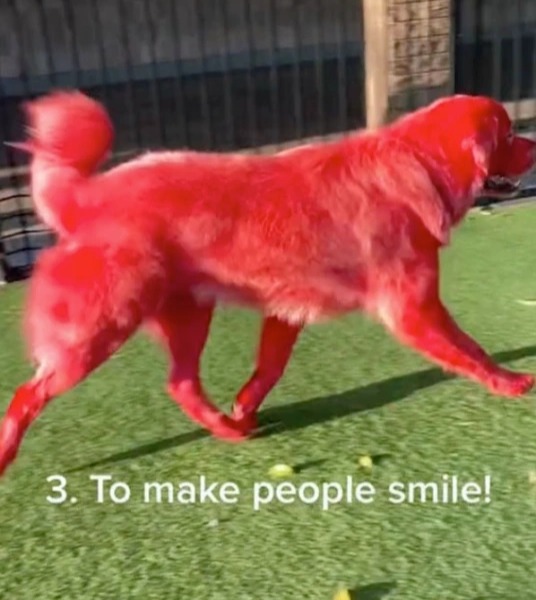 She uploaded a series of videos called “Reasons why I dye my dog red” and explained that first of all she thinks Dandy “looks so adorable in red”.

Chloe then added that turning him red lowers the risk of him being stolen in her neighbourhood as he is so distinctive.

She explained: “Dyed dogs are less likely to get stolen as they are easily identifiable.”

Another reason for turning her dog red was because she thinks he is less likely to be hit by a car or get into an accident.

She also claimed: “It is good for his fur. The vegan products have left him soft and he sheds less.”

And finally, she added: “Because it makes people happy and he loves the attention and pets.”

Chloe also said that Dandy is more approachable in red, as people used to get scared of him when he was a naturally-coloured 130lb dog.

She said she initially dyed him for Halloween, but decided to keep it as she loved it so much.

Her videos, which have racked up millions of views, have left pet lovers divided.

Some loved the red colour and praised her efforts.

However, some questioned if the dye is safe for dogs’ fur and skin long-term.

One said: “Is it safe to use that much dye all the time? Because it could hurt his skin and hair.”

The website states: “Permanent Colour lasts for more than 20 washes. For creative grooming competition and professional groomers use.

“Can be used on white, grey, apricot, and brown coats.

“Colouring results may vary with coat type and breed.

“Non-toxic and gentle on pet's coat.”

It adds that dye should not be used on pets under six months or on cats or dogs with “sensitive, irritated, or damaged skin.”

It also states that dyes are for external use only and that owners should monitor their dogs closely if they ingest the product.

The website said permanent dyes “last at least half a year, so we recommend dyeing two to three times a year to keep the colour”. And This Morning fans fume at ‘cruel’ dog owner who dyes pooch crazy colours – insisting pet should be taken away.