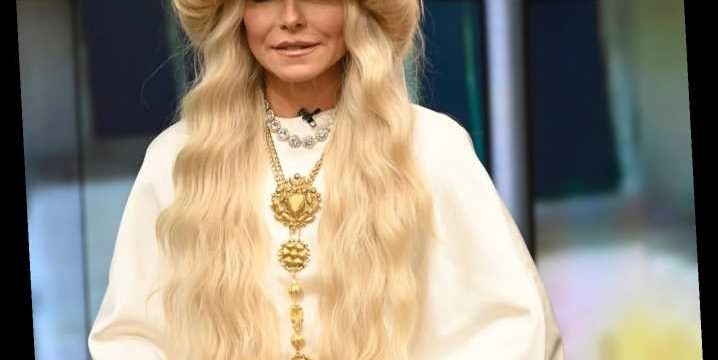 The Live with Kelly and Ryan host knocked it out of the park with this Schitt’s Creek costume, channeling the show’s matriarch, Moira Rose (played by Catherine O’Hara). The heiress showed off a total of seven Halloween costumes on Instagram, ranging from school girl to Joan of Arc.

The Bachelor in Paradise alum got creative, dressing up her baby bump as the moon and her son Brooks as an astronaut!

The soon-to-be mama of three joked, “These two little guys are out of this world! 👨‍🚀 🌝 💫 Tried to get Emmy in this pic, but she needed some space (get it 😆😆). Maybe we’ll planet for later. #badpunsarethebestpuns” The star did a tutorial of 30-second costumes and honestly, the results are pretty impressive. Case in point: this simple look inspired by Damian from Mean Girls. And a pun-tastic Dr. Pepper!

The Real Housewives of Atlanta star was nearly unrecognizable as a cheetah, posing with her daughter Blaze and son Ace.

The Summer House star made sure to express how important it is to vote in the upcoming election with her unexpected costume.

Berner wrote on Instagram, “I’m a sexy absentee ballot for Halloween and I can’t wait to be opened 💌”

When Nelly Furtado sang “I’m Like a Bird,” she was talking about Vanessa Hudgens’s Halloween costume.

The actress also dressed up as Catwoman and made her pup play the role of Bat-Dog.

Bella Thorne’s outfit did not get her grandma’s nod of approval. “Lil red 👑,” the actress wrote on Instagram, adding, “Grandma doesn’t approve of my outfit 🥺”

The real-life siblings dressed up as “fairy sisters” for one of their Halloween costumes this year.

“😈 Spooky szn is beginning! 😈” the singer captioned a photo in her costume.

The new mom and her dog, Mav, “are channeling major heroes this Halloween,” and dressing up as essential workers!

The mogul got some help from James Charles when it came to creating a spooky cheetah look. The Backstreet Boys singer and rapper got into character for Villains Night on Dancing with the Stars. McLean dressed in a costume inspired by Psycho, while Nelly dressed as Freddy Krueger from A Nightmare on Elm Street. If the Bachelorette star dressed as Cruella de Vil doesn’t scare you, no evil thing will! The Selling Sunset star really sold her performance as the wicked Maleficent. The CHEER coach dressed in a costume inspired by Nurse Ratched from One Flew Over the Cuckoo’s Nest and Netflix’s Ratched. The pair definitely didn’t suck when they wore these Dracula-inspired outfits. The Catfish creator and his partner dressed in Black Swan-inspired costumes and performed an intense Paso Doble. The pair look ultra-spooky dressed Tiffany Valentine and Chucky from Bride of Chucky. The One Day At a Time star makes a pretty convincing Carrie! Mai dressed in a costume inspired by Silence of the Lambs and Hannibal Lector, dancing a Paso Doble to Nelly Furtado’s “Maneater.” When she’s not ruling the runway, Tyra Banks is the Queen of Darkness on Dancing with the Stars. The Dancing with the Stars judge’s costume was a two-for-one! He dressed as the infamous Dr. Jekyll and Mr. Hyde. The judge went all out, dressing as the terrifying Pennywise from It. Don’t say his name three times! The judge dressed as Beetlejuice for the show’s Halloween episode.