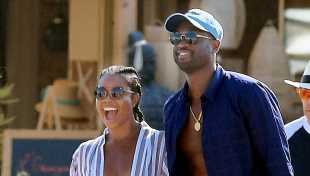 Gabrielle Union and Dwyane Wade are celebrating their five-year wedding anniversary in the south of France. She rocked a blue bikini that showed off her killer body while yachting.

While most celebs have made their way back from Mediterranean summer vacations, Gabrielle Union and Dwyane Wade, 37, are still enjoying their time in the French Riviera. And there’s a good reason, as the couple celebrated five years of wedded bliss on Aug. 30 with the romantic trip. The youthful looking 46-year-old actress showed off her amazing body in a blue bikini as she went for a dip in the hot tub aboard the yacht they’re staying on. Her rock hard abs and enviable long toned legs were on display and the top featured a cute tie in the middle in Instagram pics she shared on Sept. 1.

Gab is seen emerging from the tub in two photos. In one she has a big smile on her face and in the other she cocks her head back to shake the water out of her long braids. Later the couple went ashore, as she and her former NBA star husband were seen walking on the beach with a group of friends and she had on the same bikini, but with a grey and white striped cover up.

She never took off the swimsuit all day long as when night came, the couple was back aboard the yacht and she posted a photo still in the bikini hugging her hubby. She captioned the pic “Sunsets with my ❤ @dwyanewade #WadeWorldTour2019 #AnniversaryAntics #Year5.”

Gabrielle and Dwayne have been enjoying a vacation filled summer in Europe. They kicked things off with a trip to Greece at the beginning of June then moved on later that month to the south of France. They came back to the states for the Nickelodeon Kids Choice Sports Awards on July 12 but then headed off to Italy, yachting along the Amalfi Coast. The couple returned to the states in early August for Gabrielle to tape audition rounds as a new judge for America’s Got Talent but now they’re on a quick French vacation to celebrate their wedding anniversary. While they’re living the good life, fans have been treated to tons of bikini pics of Gab all summer long.