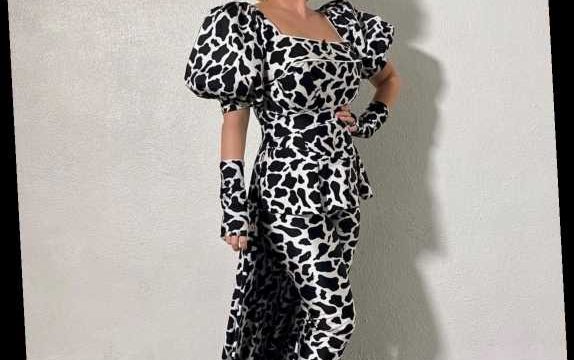 When Perry got back to work on American Idol just over a month after giving birth, she did so in true form.

“MUTHA MILKS is back to werk @americanidol and it’s 🍼udderly🍼 ridiculously MOO-ving already! 🐄 Not pictured: my pumping breaks 🙃” Perry captioned the printed look, shouting out designer Christian Siriano “for the incredible custom costume.” During the Disney Family Singalong: Volume II, the singer — who was expecting her first child with fiancé Orlando Bloom at the time — sweetly sang “Baby Mine” from the Disney animated classic Dumbo.

For the occasion, Perry dressed as Dumbo’s mom, Mrs. Jumbo, while her pup Nugget took on the role of Dumbo. The printed dress may have been relatively low-key for the singer, but it was a clue: She and Bloom welcomed daughter Daisy Dove in August 2020. Perry dressed as a roll of toilet paper while filming American Idol remotely from her home amid the coronavirus pandemic. You could say she was on a roll … Hand sanitizer is in short supply as the world deals with COVID-19, so Perry decided to become a bottle of it herself. Now that’s what we call good, clean fun. Ursula was a sea witch who took Ariel’s voice in The Little Mermaid, so American Idol contestants should watch their backs. When she hosted the MTV Video Music Awards in 2017, Perry decided to wear a full Moon Person outfit. We’re surprised she didn’t give herself to the winners instead of the actual statuette. Never forget when she publicly made up with Taylor Swift and they decided to dress as a (beef, get it?) burger and fries to commemorate the pivotal moment in the “You Need to Calm Down” music video. Her burger costume actually made its first appearance at a 2019 Met Gala afterparty. You know the saying: Every time a bell rings, Katy Perry gets her wings. This time, she rocked them at the 2018 Met Gala. The 2018 Met Gala wasn’t the first instance of Perry’s heavenly angel costume: At the 2011 Grammys, she looked like she fell from heaven above. Katy Perry wants you to look at this outfit of her basically portraying the female version of Uncle Sam for the 2013 Kids’ Inaugural: Our Children, Our Future. This costume is bananas — literally and figuratively.