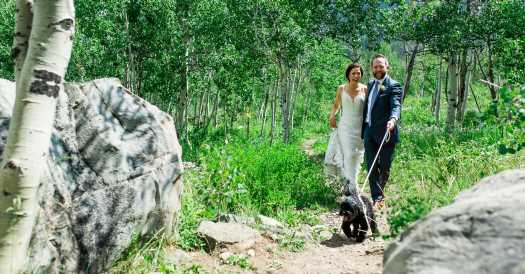 Crested Butte Mountain in Colorado is majestic. That would be reason enough to get married in its presence. But for Abigail Berger and David Frum, getting married there was a sacred celebration.

Mr. Frum’s mother, Bonnie Jean Frum, died in 2016. “Her imprint on Dave and his family is clear,” Ms. Berger said. “She raised three of the most loving, kind, fun, and strong children. Crested Butte was her favorite place. There was a hike she would do every July so she could see the wildflowers.”

After her death, the family spread her ashes over a wildflower meadow near the Crested Butte Mountain so she could always be in the place she loved. Ms. Berger and Mr. Frum got married there so she could be present for their union.

Ms. Berger, 34, grew up outside of Boulder, Colo. Both she and Mr. Frum, who is from Colorado Springs, graduated from the University of Colorado Boulder. She has a bachelor’s degree in psychology, he in political science.

The couple live in Lakewood, Colo., just outside of Denver, where she is a senior data analyst for Proofpoint, a cybersecurity company, and he is an adviser for Denver Wealth Management.

The two met at the University of Colorado Boulder on Saint Patrick’s Day in 2006. “We were at a fraternity party,” she said. “I saw a guy dancing up a storm, dressed in a green checkered blazer and green everything, and I thought he was cute. We danced for a bit, kissed, and parted ways.”

A few weeks later, she went to work at a nearby Chili’s restaurant and her sister, Katherine Berger, who also worked there, was training a new hire. It was Mr. Frum. “It took him a few minutes to remember me,” Ms. Berger said. “I guess my dancing and outfit weren’t as memorable as his.”

They became friends, but were both dating other people at the time. Their paths continued to cross. “I dated his fraternity brother at one point,” Ms. Berger said. “And we had classes in the same buildings and he would walk me to class.”

They eventually lost touch until running into each other in 2010 at a University of Colorado Boulder football game, a little over two years after having graduated. “We started messaging on Facebook, cracking jokes about Chili’s, and then ended up on a weekend long date,” Ms. Berger said. “We’ve been together ever since.”

He proposed in September 2019 in Boulder. Mr. Frum asked his brother to invite them to a dinner party, a ruse for an engagement celebration. Mr. Frum and Ms. Berger went on a hike before dinner, and that’s when he proposed. When they returned to Mr. Frum’s brother’s home, their family was all there to celebrate.

Their initial wedding date of July 17, 2020 was postponed because of the pandemic. They were finally married on July 16, 2021 in a meadow in Crested Butte, with 82 people in attendance.

Mr. Frum’s brother, Matthew Tenzin, a shamanic practitioner and a former Buddhist monk, officiated. Although Mr. Tenzin is not authorized to solemnize a wedding in Colorado, the state allows for self-solemnizing. The couple legally married themselves. The ceremony, which began with a guided meditation, included memories of Mr. Frum’s mother.

“Dave’s mom was a total thread throughout the ceremony and when Matthew was talking about Bonnie, there was a little bird that just flitted back and forth the whole time he spoke about her,” Mr. Frum said.

Their seven-year-old cockapoo, Rory, served as a flower girl, racing in from the Aspen-lined trail, leash flying behind her.

The reception, which was vegetarian, was held at Bonez, a tequila bar and Mexican restaurant. D.J. RIPM, who grew up with Ms. Berger’s brother-in-law, spun for the reception.

The night turned into a dance party beyond the couple’s wildest expectations, which was perfect, Mr. Frum said, since the Frum family is known for “dancing whenever the opportunity arises.”