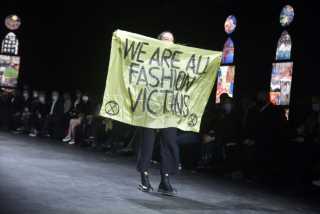 SILENT PROTEST: If a tree falls in a forest and no one is around to hear it, does it make a sound? Or, to put it differently, if a protester glides down a catwalk wordlessly during Paris Fashion Week, with a sign nobody in the audience understands, does their message get heard?

Top LMVH Moët Hennessy Louis Vuitton executives — including chairman and chief executive officer Bernard Arnault — were left scratching their heads on Tuesday, when a woman got up at the end of the Dior spring 2021 show and unfurled a yellow banner painted with the words: “We Are All Fashion Victims.”

In a corner of the flag was the extinction symbol used by environmental protesters, including climate action group Extinction Rebellion, which last year disrupted London Fashion Week with a series of demonstrations. A spokeswoman for the group in London confirmed it was behind the protest.

Given that Dior creative director of women’s wear Maria Grazia Chiuri regularly uses the catwalk as a platform for activist messages, not everyone was sure whether the moment was planned or not.

“I think it was part of the show. It’s hard to tell these days,” Antoine Arnault, head of communications and image at LVMH, said immediately after the show. He later wrote to clarify that he had been informed this was not the case, but declined to comment further about what he qualified as “kind of a non-event.”

“It was a surprise for everybody,” said Pietro Beccari, chairman and ceo of Christian Dior Couture. “It was so well done, you couldn’t tell what it was,” he added with a touch of irony.

Sidney Toledano, chairman and ceo of LVMH Fashion Group, was sitting close to where the intruder stood up. “I had no idea what was going on. I saw the girl go past, and it looked like she was walking in the show,” he said.

“I don’t think we’re destroying the planet,” he continued. “We’re committed to reducing our environmental impact by cutting our carbon dioxide emissions, tracing our raw materials and so forth. They shouldn’t be targeting us. I think there are industries that pollute much more.”

In a sign that it is ramping up its commitment to sustainability, LVMH earlier this year named Hélène Valade as its new environmental development director. One of her major objectives is setting out the group’s “Life 2030” roadmap of environmental targets for the next decade, to be unveiled next year.

Toledano seemed nonplussed by Tuesday’s protest. “It wasn’t nasty or aggressive, but I think her message wasn’t clear. You couldn’t tell if it was part of the show or not,” he said.