The photographer Anne Geddes has had a long and prolific career, but she is perhaps best known for “Down in the Garden,” a 1996 coffee-table book featuring tiny babies adorably (or tweely, depending on your perspective) tucked into unlikely horticultural scenarios, as if they’re hiding by chance in someone’s flower bed.

Perhaps you’ve seen these images online, or on a mug or greeting card or calendar: the sleeping newborns snuggling into tiny pea pods, as if they are so many peas themselves; the babies wearing mouse outfits and dozing in old boots; the babies-as-butterflies, hedgehogs, cabbages, gnomes, worms, bumblebees, flowers.

There was a time when a new book by Ms. Geddes, 64, who has been called “the world’s most famous baby photographer,” could sell many millions of copies; at the height of her fame, she was interviewed by Oprah. But the internet, Photoshopping, cellphones, the transformation of parental Instagram accounts into virtual photo galleries, the flooding of images online — all those conspired to dampen her old business model. In the last few years, Ms. Geddes has focused more on studio work, commissions for companies and private clients and campaigns for charities like the March of Dimes. 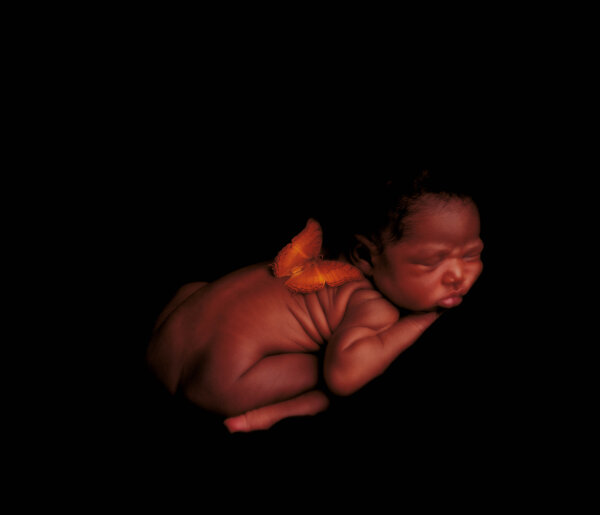 Then the pandemic hit. Marooned at home in Battery Park City with her husband, Kel, her work on hold, her mind turning in on herself, Ms. Geddes found herself — along with the rest of the world — considering larger questions. When so much is stripped away, what is important? How do you find hope amid so much fear and loss? How can artists on pause turn their creativity to something else?

Between them, she and Kel have four adult daughters — all scattered on different continents these days — and a suggestion from one of them led her to what became her pandemic project, called, simply, “Joy.” The idea was straightforward: solicit baby photographs from parents around the world, in a sort of open casting call, so that Ms. Geddes could post them in her own Instagram stories. “I guarantee I will look at all of them, and I will like all of them,” she posted in a video message.

The responses poured in. Newborns, babies, toddlers, the occasional older child, siblings hugging each other, hundreds and hundreds of photos from 80-plus countries — from France, from Kazakhstan, from Britain, from Saudi Arabia, from Russia, from Iran, from Poland, from Singapore, from India, from Papua New Guinea — and counting. They seemed like postcards from the past, or perhaps from the future. They seemed like glimpses not only of joy, but of hope.

“The messages were all the same,” Ms. Geddes said in a video interview. “One mother said, ‘I’m sending you my heart.’”

An early post featured an infant boy named Mason — three months old, a resident of Canada — wearing a Minions outfit. “At the moment we are all one heartbeat,” Ms. Geddes wrote in the accompanying caption. “Collective joy around the world is what we all need right now.”

From Monaghan, Ireland, a new mother named Sarah Bond sent a photo of her daughter, Heidi, born in November of 2019 and only a few months old when the world locked down. New babies are gifts; Heidi’s arrival was especially precious for Ms. Bond, who was 42 when she gave birth and had been trying for more than a decade to become pregnant.

“I was in this bubble of pure joy, and that is probably why I sent in her picture; I had never felt anything like that before,” she said. Unable to see her parents or her in-laws or much of anyone outside her immediate family, she felt that being included made her part of the wider world. “I just thought it was very generous of her to give her time like that,” she said, of Ms. Geddes.

It can be lonely to give birth in a pandemic, a time when the normal support system that surrounds a new parent — the friends who drop by with gifts and encouragement, the strangers who coo at your baby in the street, the grandparents who babysit — isn’t available.

“One of the things I’ve thought about is there are all these little babies who were born last year and into this year who don’t go on play dates,” Ms. Geddes said. “I was standing on a street corner waiting for the walk sign and there is a little baby sitting in a stroller and she’s six or seven months old, and everybody around her is wearing a mask and I though, ‘This is what she thinks humans look like.’”

Destiny Rosado, a mother of six who repaired to Easton, Pa. from Brooklyn when the pandemic began, submitted a photo of her baby, Sophia, born last April in the dark, early days of the virus.

“The hardest part was giving birth with a N95 mask on, but it made me appreciate our first responders who wear it all day and all night,” Ms. Rosado wrote in a caption Ms. Geddes included on her Instagram page. “At one point my IV got knocked out and I was bleeding all over a nurse, and she didn’t care. She just looked me in the eye and said ‘I’m going to get you through this.’”

A little while later, Ms. Geddes included Sophia in a photo shoot she did for L’Uomo Vogue in Italy — a shoot that included an unusual cover image: two naked babies wearing little Vogue hats.

“She’s bringing so much purity to the world in a time of so much sadness and heaviness,” Ms. Rosado said. “The babies represent life to me — and hope. That’s what she’s trying to give everyone, a bit of hope in dark times.”

Ms. Geddes, who is from Australia, more or less backed into her vocation. After a stint in public relations, she picked up a camera for the first time at the age of 25 got a job in a photography studio in Melbourne.

She and Kel, a television executive, moved to New Zealand in 1988. When a magazine editor used one of her images of a child in a big editorial spread, her career took off, she said, and soon she became a go-to children’s portraitist. She published her first calendar in 1992. She began setting aside a day each month in which to let her imagination run free with her favorite subject: babies.

“Photographing small children is challenging and exhausting, but you can get the most gorgeous images from the most difficult children,” she said. In those heady pre-Photoshop days, she spent hundreds of thousands of dollars building elaborate sets — the outfits, the pea pods, the toadstools, the flowerpots, the accouterments, you name it — and countless time engineering how to get the babies to do what she wanted.

For instance, for a photograph of Rhys and Grant, a pair of plump twins dressed as cabbages, the challenge was to get them to settle down, stop crying and/or grizzling (or sleeping) and join in the spirit of the photo shoot.

“You have six-to-seven-month-olds in the studio and I’m thinking, ‘how do I get them to look at each other when there’s so much happening?’” she said. She had an assistant run a balloon on a string past them, and then pull it away at the opportune moment, when each twin’s gaze rested in the other’s direction.

“The thing with a baby is everything needs to revolve around them,” she said. “You bring a newborn home — and the newborn is the ultimate diva in your house.”

With the commercial aspects of her profession changing so rapidly, Ms. Geddes has had to seek more creative ways of making money. She sells limited-edition prints of her work online and is developing an app that will help people organize, store and share their photographs. Another project still in development would allow people to take photographs of their babies and insert them into classic Anne Geddes scenarios — inside a pea pod, for instance.

But what she really wants to talk about is what the continued existence of babies means at this strange moment, about how “joy becomes more extreme when it’s running alongside fear and pain and sorrow,” as she put it.

“The virus hasn’t stopped life,” she said. “Babies are reminding us that there is still joy and there is a future, and that we’re going to be OK.”