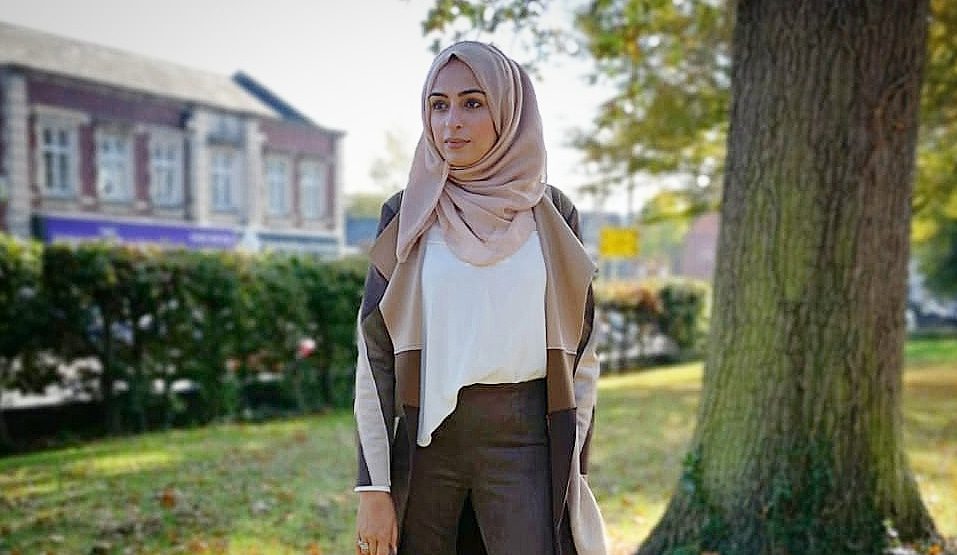 Bushra Shaikh appeared on BBC One’s The Apprentice in 2017 as owner and designer of her own modest fashion label, creating luxury apparel for Muslim women. The Surrey businesswoman was fired by Sir Alan Sugar in week nine and while she continues her career as a fashion designer, here she explains why she has stopped wearing the hijab...

My mum tugged and wrestled but I refused to remove my hijab before going to bed.

Looking back, it seems odd I was so adamant because, in my family, nobody wore a headscarf. We did all the other religious things – the prayers and fasting – but not the ‘how you dress’ part.

Then aged nine, I attended a mosque after school and the imams taught us about the importance of it for all girls honouring God.

I was convinced I would go to hell if I didn’t wear it, so much so that I insisted on sleeping in it, even covering my eyebrows during the night.

I was grappling with ‘the right thing to do’, even at that tender age. But I’ve since learned that what is best for me is to follow my heart – and not let others tell me what is right or wrong with it comes to my relationship with my God.

Muslim women cannot seem to win. There is confusion our entire lives over what’s correct when it comes to covering ourselves.

By secondary school, I wasn’t wearing headscarves. My mosque classes were now over and with that influence gone, combined with the fact that my family had convinced me it wasn’t yet necessary to wear one, I stopped.

At 19, I’d been studying Islam myself, while doing my fashion degree at university, I got married and my husband became Muslim so I adopted the hijab again because it felt appropriate. Starting to wear it again, I felt slightly confused at times. One part of me felt happy because I was pleasing my husband, which meant I was pleasing God – while the other part battled against it internally.

As a designer I was just finding my feet. Fashion is a form of expression. It’s the first thing that somebody sees when they meet you, so it says a lot about you.

I wanted to give people an opportunity to express their identity through clothing. I did everything from ball gowns to hip miniskirts made from old jeans.

The difficult thing about the hijab was that, doing fashion, being covered affected my career because I felt I could no longer design particularly revealing garments. That’s why I launched my own Islamic fashion brand, because I couldn’t design a bikini – that went against the modesty factor.

My career stopped while I had three children and I lost my drive because I couldn’t design like I wanted to, deep down, anymore.

Back then nobody really encouraged you to express yourself if you were feeling unhappy or discontent, especially in the South Asian community.

I was conflicted because, to my understanding, Islam prohibits expression through clothing. You can wear anything in front of your spouse but not in public.

Then, around 2009, there came a turning point of ‘modest fashion’ where the traditional Islamic look became popularised. The hijab started to be designed to be attractive – colourful.

At first, I thought I had found my calling – to determine how a Muslim woman can still represent herself through clothing items while still being true to her modesty.

My clothing designs were met with great success but there’s always two sides of a coin. I started to confuse what my job and my faith meant.

There is not and should not be a ‘fashionable’ side of religion. It is contradictory to what the faith means. The line started blurring and blurring more – I saw imagery from mainstream brands where the model’s arms were showing but the legs were covered and she had a hijab on. I felt uneasy about it.

If you’re looking at a trend, it’s no longer about the faith, it’s more of a fashion statement.

Yes, we want representation but that needs to also respect the religion. Hijab is not meant to ‘look good on’. It’s a religious garment and it is meant to be about modesty.

From a religious point of view, I’d been in two minds for a long, long time about how to express myself and my faith.

I started feeling strange when I was going out in jeans and a fitted top with a headscarf on. It looked conflicting. I felt like on one hand I was honouring the faith but on the other I was trying to look really good. The point of the hijab is to try to draw attention away from yourself, not the opposite.

I do not need to have a physical symbol, through clothing, to prove my piety. I genuinely believe that the hijab part of Islam is misunderstood.

I hate the element of our community that labels women. When I took part in BBC’s The Apprentice in 2017, because I was covered, I was deemed a role model – a pinup example – of a good Muslim woman.

But being part of faith is a journey. If tomorrow I decide I want to wear a hijab again, then it shouldn’t be a problem. There should not be judgement either way.

Everybody should be free. I urge young women facing these challenges to talk about them, don’t internalise them like I did. I know how hard it can be to please your faith, to please your friends and colleagues.

When I made the decision to take the headscarf off I felt a weight had been lifted from my shoulders because in my heart I knew that religion shouldn’t feel so hard and if it does then we should go back to the beginning, understand the real teachings.

My daughter, now 10, looks up to me and my sisters – some of us cover, some don’t. ‘Mum, you look so much nicer without it,’ she said out of nowhere a year later. She could see I was happier.

I don’t want to pressure her either way. I used to look in the mirror every single day and knew I wasn’t looking at the real me – I was wearing hijab for everyone else.

That was doing me more harm than good. I’m now comfortable in my skin, I’m not putting on a facade, I’m not pretending to be anything but myself.

I still pray, I teach my kids, I will attend mosque in appropriate clothing and I still honour my faith in every way.

In Islam, we have five pillars – belief in one God, believing the prophet Mohammed is the last prophet, pilgrimage to Mecca and daily prayers and fasting. If a woman never wore her hijab she will still be entered into heaven – so why are we judged so much on our clothing?

Representing your religion is about your actions, not what you’re wearing. The emphasis on hijab is way out of control.

Muslim women need to talk about being covered openly and not make judgements on each other. I want to encourage women to make their own decisions and honour their faith in their own way, however it feels correct for them.

For many years I had tunnel vision and you don’t see that you’re living in a bubble until you step outside it. Once I widened my mind, I saw things in such a different way.

That’s what I want for my daughter and other young Muslim women.

You should not have to sacrifice your happiness, your wants or peace for any religion – that’s the opposite to what any religion should do for you.