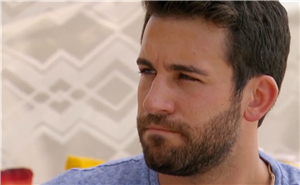 Bachelor in Paradise offers Bachelor Nation alums the really exciting opportunity to date multiple people at once and increase their changes of finding love. But, there’s also the flip-side of that situation. As wonderful as it is to begin multiple relationships, it leaves everyone open to the possibility of multiple breakups. Unfortunately for Derek Peth, he was dumped more than once during Season 6 of Bachelor in Paradise. Why did Derek leave Bachelor in Paradise? After getting his heart broken so many times, he didn’t want to stick it out anymore.

Derek started out this season of Bachelor in Paradise dating Demi Burnett. They were pretty much tied together at the hip for most of the first couple episodes of Season 6. But, Demi was conflicted because she also had feelings for the woman she’d been dating before Paradise, Kristian Haggerty. She decided to break things off with Derek, telling him that it had nothing to do with him but instead was about her feelings for someone else. After Kristian joined Demi in Paradise, Derek started pursuing Tayshia Adams. It seemed like things could be moving in a strong direction for them (with the exception of a fight with John Paul Jones) until Tayshia decided to take Derek to the side for a talk. That’s when Derek found himself in a very familiar conversation.

Tayshia first broke things off with JPJ, and so it seemed like she was maybe going to give things a go with Derek. But instead, she sat Derek down to tell him that she just didn’t feel like he was the one for her. She said that they connected on a number of levels, especially because she’s been married and he’s been engaged so they have similar relationship histories. But, that wasn’t enough to make Tayshia sure that Derek was the one. She told him that she thought there might be other people for him still in Paradise. But, Derek wasn’t too sure.

Derek was pretty upset that he keeps finding him in positions where people tell him he’s a good guy but he’s just not the one for them. "It seems like when I finally click with somebody, they run away," Derek said. "All I want is someone to reciprocate."

After his tough conversation with Tayshia, Derek decided to gather his fellow contestants together for an announcement. He told them:

Both Demi and Tayshia were upset to see Derek go since they both had been a part of his struggle to find lasting love. But, in the end, their relationships with Derek weren’t right for them, and the friendships of Paradise weren’t enough for him to stay.

Season 6 of Bachelor in Paradise continues at 8 p.m. ET on Tuesday, Sept. 3, on ABC.