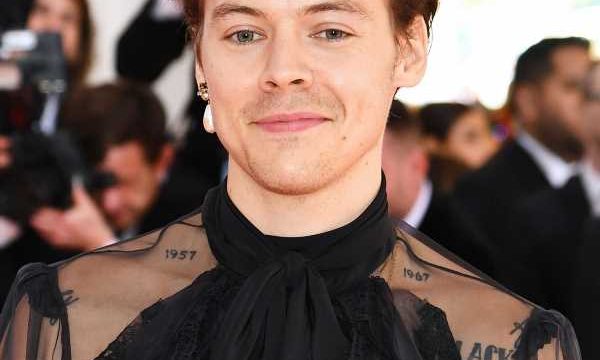 It’s been two years since Harry Styles blessed our ears with some new music, fam. His debut album was a major hit, reaching number one on the Billboard charts. And, if you’re like me, you are desperately waiting for a follow-up. So, when does Harry Styles’ second album come out? Well, here are all the tell-tale signs that it is going to be soon.

On August 4, Styles was snapped in Cancun, Mexico on a music video shoot that his reps reportedly tried to conceal as a commercial shoot for Mayo. Honestly, when’s the last time you ate Mayo while dressed in a super sparkly top paired with high-waisted bell-bottoms and suspenders? Never? Same.

Styles was also spotted with a film crew which makes me believe he was shooting a music video, too. You don’t normally shoot a music video if you haven’t already made music for said video. So, I’m going to assume he has at least one new song under his belt.

As you can imagine, Styles’ fans are super excited about the good news and have subsequently lost their minds online.

"I am not okay. Harry Styles might be filming a music video. HS2 IS COMING," one fan tweeted along with the photos of Styles on set. It sure is exciting. Woohoo!

Another fan couldn’t get over Style’s incredible style (get it?) for the shoot. "Not only is is Harry Styles in cancun, but he’s there shooting a MUSIC VIDEO wearing a sparkly blue outfit with Suspenders and white Heeled boots supposedly taking inspiration from david. bowie’s ziggy stardust era?????? LIKE i think i’m having an aneurysm!?” they wrote.

One fan is sure the tropical shoot location and snazzy threads could be an indicator of a song featuring Latin influences.

"We’re about to get a new music video of Harry probably singing/speaking in spanish since it was filmed in mexico and it has a latino style theme," they tweeted. OMG, is Harry about to get his Señorita on?!

Unfortunately for fans, Styles’ hasn’t released any sort of official statement indicating he’s wrapped an album, but he’s been dropping subtle hints for some time now. On May 12, 2019, the former One Direction member celebrated the two-year mark of his wildly successful self-titled debut album with a special tweet. He wrote, "Two Years. Thank you for everything.I love you, truly. H #HS2Year." While that hashtag could simply be calling out Harry Styles’ second anniversary, it could also be hinting that HS2’s release year has arrived in 2019.

The day before that, mega-producer Mark Ronson uploaded a photo Harry Styles took of him sleeping in a studio to his Instagram story. That is huge you guys. Huge! Ronson is behind some of the catchiest tracks ever released, like Bruno Mars’ "Uptown Funk" and Miley Cyrus’ "Nothing Breaks Like A Heart."

And, in a November 2018 interview with Timothée Chamalet for i-D Magazine, Styles shared he was already working on new music: "I’m making my second album right now, so I’m going to do that, read a lot, and see what happens."

Well Harry, I see what’s happening. You’re filming a music video about nine months later, which points to a comeback season. The album is close and maybe a single is even closer. Eep!