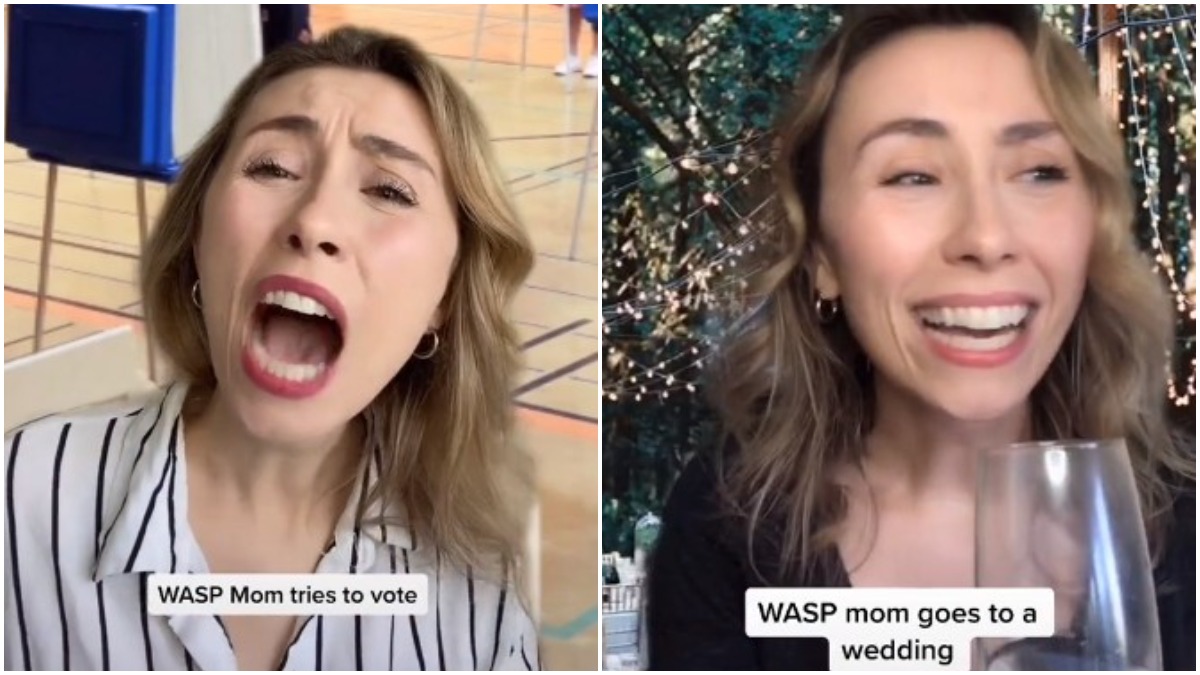 TikTok character Wasp mom, as played by Caitlin Reilly, has returned with another hilarious video, which has led many to ask what is a Wasp mom anyway?

Wasp Mom, aka Caitlin Reilly, has been keeping many of us going through the dark times of this global pandemic with her wonderful comic character.

Her relatable comedy really hits the nail on the head and has really struck a chord with many as they watch Wasp mom struggle with day to day life in recent months. The videos have hundreds of thousands of views.

Wasp mom, with her passive-aggressive, tense sarcastic dripping voice and high-pitched laugh, is both hilarious and horrible at the same time. It’s funny but also so so terribly cringe.

In her first video as Wasp mom in April, Cailtin introduced us to Cheryl who is Facetiming her friend and gushing about how she’s having a wonderful time with the family during the quarantine.

However, it becomes obvious very quickly that she is actually miserable and has started drinking in the morning.

Her two most popular videos have been Wasp mom ordering pizza and another at an Olive Garden.

In the pizza one, she asks in the most annoying manner, “I would like some extra chili flakes… I asked for that last time; I didn’t get it; I was really dissatisfied, so if you remember that this time that’d be great!”

Wasp mom is similar to Karen

At the Olive Garden, she asks, “I live in the area. Can I get a local discount?” Wasp mom has a lot of similarities to the infamous Karen character; we can see both asking for the manager.

But what makes Reilly’s impression so brilliant is that most of us have come across real-life people just like this.

In the latest video released yesterday, Cheryl is back, and this time she’s just learned that she’s gonna be a grandma for the first time.

In the video, she feigns excitement at the prospect, “wow, I’m going to be a grandma… that’s soon,” she says with a hint of despair in her voice.

So what is a wasp mom?

WASP is an acronym that stands for White Anglo-Saxon Protestant. It’s pronounced just like the angry yellow and black insect.

It was a derogatory term first popularized in the 1950s and was meant to refer to people who are white, protestant, and upper-middle class. They’ve generally received an Ivy League or a Seven Sisters education and are usually from the east coast.

Just like Wasp mom, they are usually completely sozzled on alcohol, and while they may appear conservative on the outside, it is often a false facade.

Caitlin Reilly manages to play the role so well that fans have asked her in the comments if she is actually a Wasp mom. Let’s hope she keeps up the great comedy.

In other TikTok news, one of the platform’s stars, Zoe LaVerne, found herself in trouble this week after she was accused of kissing a minor. She has denied any accusations of inappropriate behavior.