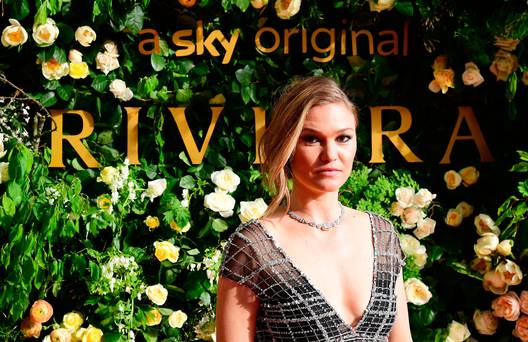 FORMER U2 manager Paul McGuinness swapped worldwide arenas for the red carpet in London tonight, for the season two premiere of his hit TV show ‘Riviera’.

McGuinness, who managed U2 from 1978 to 2013, is behind the Sky Atlantic show set along the sun-soaked French coast.

The glamorous drama, which cost more than €40m to create, is back for a second season this month. Season one drew in 20 million downloads and views, making it Sky’s best-performing original series.

The new season premiere took place at the contemporary Saatchi Gallery in London, with a star-studded guest list in attendance.

After a hit first season, executive producer McGuinness is already planning on returning for a third series.

“I hope that season two will be as be as well received as season one and we are already with our fingers crossed thinking about season three,” he told Independent.ie.

“It is very difficult to make, as we have down nearly 2O hours of drama.

“You need a lot of writers, directors and characters and actors and the effort that goes goes into maintaining the standard is really considerable.

“You don’t know where you are going at the start and the characters tend to develop a life of their own.”

’10 Things I Hate About You’ actress Julia Stiles, who plays leading lady Georgina Clios, arrived at the screening wearing a £1million of diamonds from exclusive jewellers Boodles.

“When I was first sent the pilot I thought- wealth and glamour in the south of France, sign me up,” Stiles said at the premiere.

“We’ve taken this series to a whole new level of excitement, more fancy clothes and locations, and I hope you enjoy it as much as I did.”

Stiles was joined at the screening with English model and actress Poppy Delevingne, who is set to make waves in her new role.

New cast member Delevingne, who is no stranger to the London social scene alongside her sister – fellow model Cara Delevingne – made her American TV debut in period drama ‘Genius’ last year.

Also at the premiere was ‘Strictly Come Dancing’ presenter Claudia Winkleman, whose husband Kris Thykier worked as an executive producer alongside McGuinness on the show.

The first season of the thrilling drama, which aired in June 2017, left viewers gripping to the edge of their seats as Georgina sought to uncover the truth about her husband’s death.

This time around, the show’s highly anticipated return picks up in the immediate aftermath of the explosive first series finale, where the Clios family is faced with the tragic death of one of their own.

Speaking previously with Independent.ie, McGuinness, who was also a founding partner of TV3, said that he still sees the Irish rockers regularly.

They sometimes come for lunch because we shoot very much in the area where all five of us have houses,” he told Independent.ie.

“We see a lot of each other, even nowadays. Certainly, Bono and Adam have been to lunch on set. I haven’t asked them whether we could film in their houses.”

Riviera returns to Sky Atlantic and NOW TV with more drama on the Cote d’Azur on Thursday May 23.