“The Real Housewives of Potomac” star Wendy Osefo is coming with fierce, unapologetic energy in season six. When we first met the reality star in season five, she was a distinguished political news analyst and professor at Johns Hopkins University who took pride in her four degrees. In season six, viewers see Wendy singing a different tune as “Zen Wen.” Wendy seems pretty informal this season — introducing her new body enhancements “Happy” and “Ness” to her co-stars, and landing herself in verbal wars with newcomer Mia Thornton.

For many fans, Wendy’s new attitude and new look seems inauthentic in her second season. In a Reddit thread, one user called out the reality star’s “cringey” behavior in season six. “I’m not sure if the producers told her to ramp it up this season, but her vibe is coming off as pretty inauthentic. Sad because I enjoyed her last season, she brought something different than most of the other housewives,” they wrote. Another user suggested that the criticism she received in her first season had an effect on her. The “RHOP” fans aren’t the only ones questioning Wendy’s perceived alter ego. Her co-stars have their own questions and speculations — more specifically, Gizelle Bryant. Here’s what Wendy has to say. 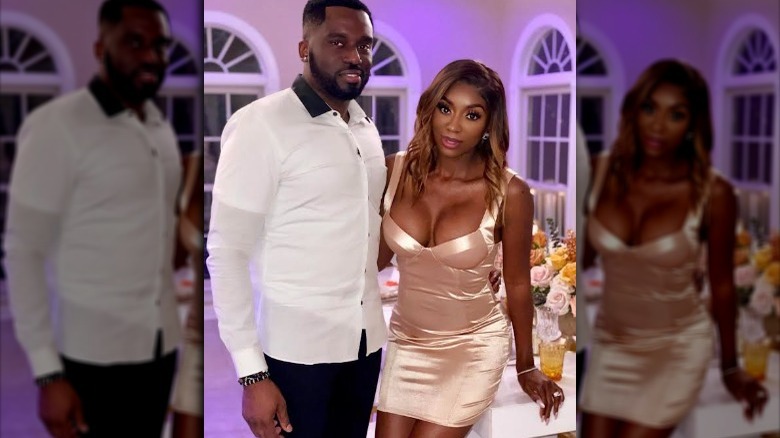 Episode five of season six of Bravo’s “Real Housewives of Potomac” was yet another explosive episode for Wendy Osefo. During the episode, Gizelle Bryant questioned Wendy’s new look and made the claim that Wendy is no longer the woman “that they met.” To that point, she made the speculation to Ashley Darby that Wendy is “overcompensating” amid the cheating rumors surrounding her husband, Eddie Osefo. Of course, that didn’t end well.

As the episode aired, Wendy took to Twitter to fire off at Gizelle for “attacking” her family. “We all saw you [Gizelle] bring up the false rumors in this scene,” she tweeted. “You were so PRESSED to make sure it made air, you said it AGAIN. Girl you [are] not a friend nor were you concerned. You just have a history of attacking marriages! I pray you find happiness in [your] own life.”

In another tweet, she shared a collage of looks she wore in season five to further accuse Gizelle of “body shaming” her for getting cosmetic surgery. She continued, “So, when I wore these outfits last year during Season [five] of [RHOP] NO ONE had a problem with it or questioned me… I guess the REAL issue is that I got my boobs done, not my outfit choices. This negative narrative surrounding my appearance is BODY SHAMING at its finest. SMH.” Twitter users argued that she wasn’t body shamed, agreeing that Wendy has shown more skin than usual in the season. While many agree that Wendy has changed in the new season, it’s still unclear the real reason why.