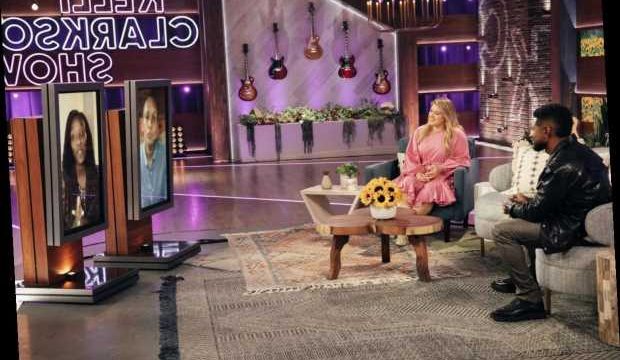 Kelly Clarkson welcomed a star-studded lineup of musical superstars during Music Week on The Kelly Clarkson Show. And R&B game-changer Usher popped by for a socially distanced interview with the talk-show maven. While there, he made an ill-timed comment that resulted in an awkwardly hilarious exchange.

Usher joined Clarkson on her extra-wide couch for a remarkably entertaining interview. The A-listers bantered about homeschooling during the coronavirus pandemic, mixing it up on The Voice, and Usher’s eclectic taste in music. But the real reason the soulful soloist popped by was to promote his new song, “Bad Habits.”

To the delight of music aficionados, The Kelly Clarkson Show previewed a clip of Usher’s music video for “Bad Habits.” According to the artist, he partnered with a slew of artistic minds to produce the video during the pandemic. “I got really creative with the video with Todd Sims, Rio, Amy, and also, Chris Robinson,” revealed Usher. “We were able to play with our imagination. You know, in this time, you don’t have as many options, so you have to find ways to really be creative narrating stories.”

And when it comes to telling stories through music, Usher is a pro. About the real meaning behind the song, he divulged to Clarkson, “We all have those bad habits that stop us from moving forward in life.” Usher poignantly remarked, “And not until actually, we address them do we begin to get over it or either acknowledge that maybe some of the trauma and drama you’re dealing with in your life comes as a result of you keeping it there. So, it’s a song that really talks about it [and] addresses it.”

Usher elaborated about the complex subject matter that inspired “Bad Habits.” Diving deeper into the undercurrents of the lyrics, he pondered, “being able to, you know, have that very difficult topic and conversation that I’m pretty sure people all over the world are now having to deal with their significant others and have these very complicated conversations at home.”

“And listen,” advised Usher. “The divorce rate is ridiculously high at this point.”

“Yes, I am aware,” the recently divorced Clarkson reminded her guest. The duo enjoyed a laugh, and Usher cut any remaining tension by punctuating Clarkson’s quip with an imitation of a drum snare.

For the record, on an earlier show, Clarkson briefly acknowledged the news of her divorce from her husband and father of her children, Brandon Blackstock.

After the brief awkward moment, Usher morphed back into a serious tone during his interview. The star noted, “At this point, I think it’s important for us to learn how to be honest with ourselves.”

“So you don’t swim in the same stuff,” Clarkson agreed.

“And eventually, you get tired, the water gets really cold, and eventually you have to restart…. Let it out and restart it.”