Products featured are independently selected by our editorial team and we may earn a commission from purchases made from our links; the retailer may also receive certain auditable data for accounting purposes.

YouTuber Jake Paul takes to the boxing ring this weekend in the first Triller Fight Club event of 2021. The April 17 card features the polarizing internet celebrity taking on ONE Championship champion Ben Askren in a live pay-per-view event streaming on FITE.tv.

The Paul vs. Askren fight takes place this Saturday, April 17 live from the Mercedes-Benz Stadium in Atlanta, Georgia. With Covid precautions still in place, only 100 lucky “Golden Ticket” winners were invited to be in the stands for the event.

The event starts at 6pm EST / 3pm PST, with Paul vs. Askren slated to take to the ring at 9pm EST / 6pm PST. In addition to the boxing matches, there will be a host of special musical performances from Justin Bieber, Doja Cat, Snoop Dogg and others (see full list of Triller Fight Club performers below).

The Best Headphones for Glasses Wearers

The Private Lives of Liza Minnelli (The Rainbow Ends Here)

How to Watch Paul vs. Askren Online

Log into FITE.tv to access a live stream of the fight on your computer, or download the FITE app to watch Triller Fight Club on your phone or gaming device. You can also watch Paul vs. Askren on TV live by loading the FITE app on your favorite streaming device (like the Fire TV Stick 4K from Amazon).

Your purchase on FITE gets you immediate access to live stream the Triller Fight Club PPV event online. You’ll also be able to watch unlimited replays after the fight is over.

There is no way to watch Triller Fight Club online free but if you’re a fan of Paul’s you can stream Paul vs. Askren on FITE and get free access to watch Jake Paul PRBLM Child – The Complete Documentary on FITE.tv. until June 30th. 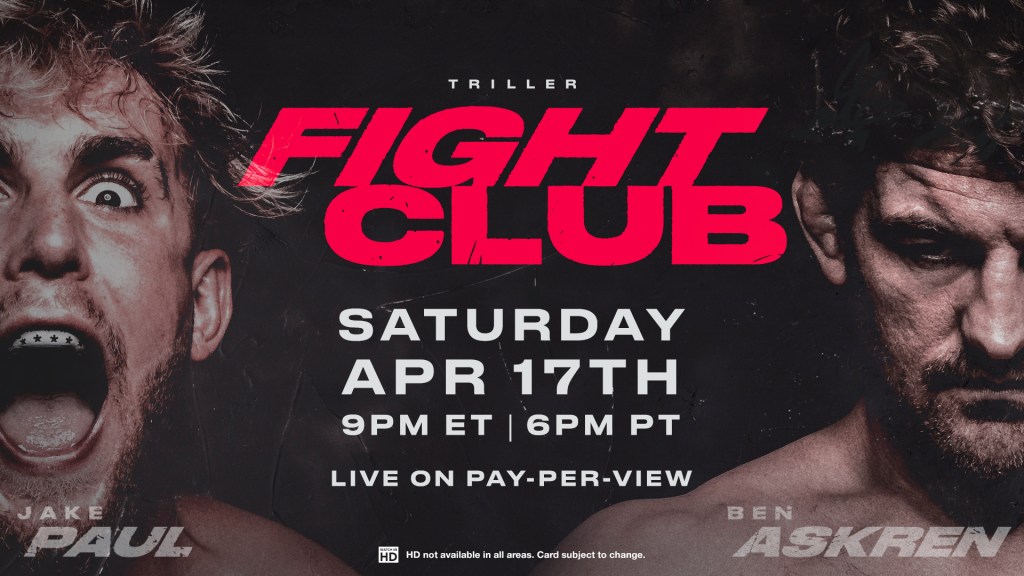 How to Watch Jake Paul Fight on TV

If you want to watch Jake Paul vs. Ben Askren on TV, you can sign-up for the pay-per-view event through your local cable and satellite provider.

For example, AT&T customers can launch their interactive PPV screen on channel 1101 and then select Triller Fight Club. You’ll then be directed to pay the $50 PPV price to access the event.

Verizon Fios customers can head to channel 1001 to access the PPV screen to place their order.

The Triller Fight Club event will be available to order on pay-per-view on most cable and satellite providers, including Xfinity, Spectrum, Contour, DirecTV, AT&T TV, Dish, Fios, and Optimum in the U.S.

You can also watch the Jake Paul vs. Ben Askren fight in Canada through Rogers, Bell, Shaw, Videotron, and Sasktel. As with streaming, there is no way to watch Paul vs. Asken on TV free.

In addition to the highly-anticipated matchup between Paul and Askren, the Triller Fight Club event will feature performances from Justin Bieber, The Black Keys, Doja Cat, Saweetie, Diplo and Major Lazer. It will also feature the first-ever performance and debut of the hip-hop supergroup Mt. Westmore, featuring Snoop Dogg, Ice Cube, Too $hort, and E-40.

Snoop is a co-owner in the Triller Fight Club brand, and the company says the rapper helped to personally choose the fighters and musical acts for this event.

The April 17th card will be Triller Fight Club’s first in a series of 2021 special events, following the debut Mike Tyson vs. Roy Jones Jr. PPV fight in 2020, which Triller says was the eighth most successful fight PPV in history.

This event features YouTuber Jake Paul taking on former Bellator and ONE Championship champion Ben Askren in the headline matchup. Paul fought on the undercard of the Tyson vs. Jones Jr. fight, taking down former NBA star Nate Robinson in a second-round knockout.

Askren, meantime, is a noted MMA competitor, who transitions to boxing for the Triller Fight Club matchup. Askren made his professional MMA debut in 2009 and was also the PAN American Champion in freestyle wrestling and a two-time NCAA wrestling champion for Missouri.

In addition to Paul vs. Askren, the fight card for Triller Fight Club includes Regis Prograis vs. Ivan Redkach in a Junior Welterweight fight; Steve Cunningham vs. Frank Mir in a Heavyweight bout; and Joe Fournier vs. Reykon in a Light Heavyweight matchup. See full fight details on FITE.tv.