Hey, you there, person who shamelessly forced their entire family to do the “Blinding Lights” challenge in quarantine: it probably had a huge impact on The Weeknd’s net worth. While 2020 was undoubtably the worst, a sh*t show, a garbage fire, etc. (take your pick), The Weeknd—aka Abel Tesfaye—continued to cement himself as one of the industry’s top streaming artists. And apparently more streaming = more tours = more money. Abel’s net worth is massive thanks to billions of streams converting into millions of dollars, and we’re breaking it down for you right here—while simultaneously having a breakdown, of course. *cries at bank balance*

2017 was The Weeknd’s highest earning year thus far—and it’s all thanks to billions (that’s billions with a B) of streams. Those streams lead to a truly massive touring advance of $75 million, what experts call a nutso sum of money. The Weeknd ended up earning $92 million total that year, which landed him on the cover of Forbes. Like, there’s rich, and then there’s Forbes cover rich, ya know? 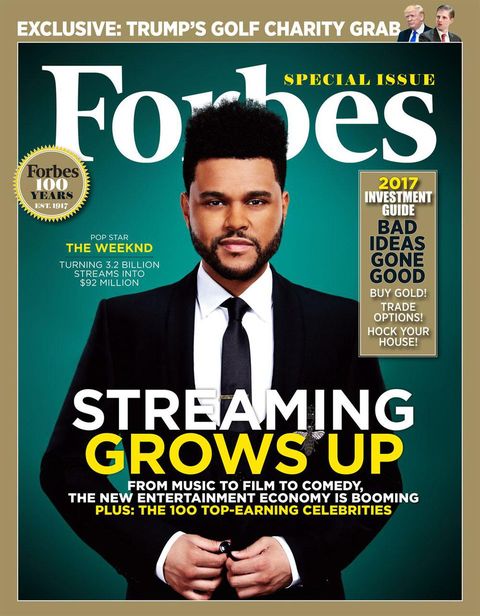 As Abel told the magazine, “We live in a world where artists don’t really make the money off the music like we did in the Golden Age. It’s not really coming in until you hit the stage.”

His Earnings Dropped in 2019

But when I say “dropped,” I mean he still made a full $40 million—much of which came from brand deals with the likes of Puma and Bacardi. And FYI, while The Weeknd’s 2020 earnings haven’t been announced yet, streams from “Blinding Lights” and After Hours alone should set him up for a pretty lucrative year. Hope his accountant is ready to do some math.

He Has Millions in Real Estate

On top of his $21 million Beverly Hills penthouse, The Weeknd owns an estate in Hidden Hills which he bought for $18 million and is currently trying to sell for $25 million (that’s a $7 million profit). In case you’re interested in buying, lol, here’s the vibe:

FYI: He Likely Isn’t Getting Paid for the Super Bowl

Unless the NFL is switching things up in 2021, The Weeknd won’t be getting a paycheck for performing during the upcoming Super Bowl LV—much like J.Lo and Shakira didn’t last year. Why, you ask? The NFL never pays artists for the halftime show because they view it as free advertising. Apparently, artists can expect their music sales to have a massive spike as a result of their performance. As an NFL spokesperson explained to Forbes in 2016, “We do not pay the artists. We cover expenses and production costs.”

So, What’s His Net Worth?

According to Celebrity Net Worth, that’d be $100 million. I repeat: $100 million. Congratulations to The Weeknd, now excuse me while I go attempt to, like, figure out stocks because lord knows they didn’t teach that in high school.