Katie Ledecky is known as the “First Lady of Freestyle,” which is fitting since she’s usually the first swimmer to get her fingers on the wall at the end of her races — not that her competitions are usually won by finger lengths.

Ledecky holds world records in the women’s 1500-m, 800-m, and 400-m freestyle events. She’s competed in two Olympic games and brought home six medals: five gold and one silver. Her impressive collection of hardware also includes 15 gold and three bronze World Championship medals. Ahead of the 2020 Tokyo Olympics, she punched her ticket to the games at the U.S. Olympic trials, where she qualified for the 200-m, 400-m, and 800-m freestyle. She also dominated the field in the 1500-m race. As noted by USA Today, the event was not part of the women’s Olympic program until the 2020 games. Ledecky earned a fifth opportunity to medal when she was added to the 4×200-m freestyle relay.

Athletes who are on top of their game often feel pressure to stay there, but Ledecky does not worry about what other people want her to do and focuses on her own goals. “I think the most important expectations are the ones that I have for myself,” she told The Washington Post. No matter what happens in her future, Ledecky will always be considered a swimming legend, and she has even had a few brushes with other sporting greats during her transformation into a top athlete. 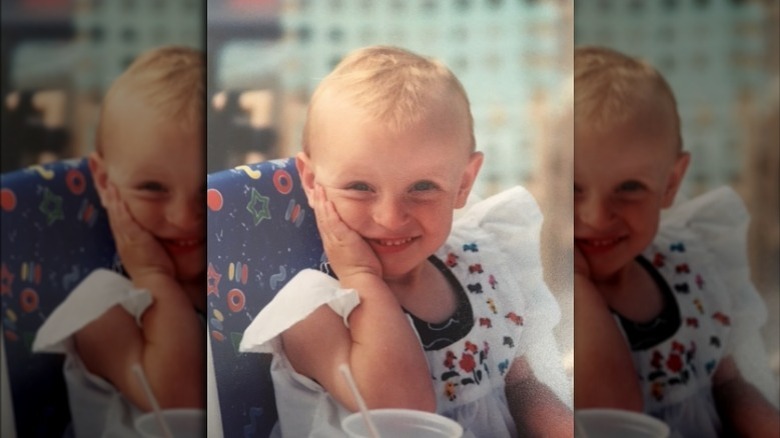 Katie Ledecky was born on March 17, 1997 in Washington, D.C. (via Britannica). One of her most memorable childhood moments was captured on camera, and she shared it with her Twitter followers in April 2020. It showed a young Ledecky sitting in front of Michael Jordan in the owner’s box of the Washington Capitals. According to The New York Post, her uncle used to co-own the NBA team.

Jordan was trying to play peek-a-boo with Ledecky, but the toddler barely reacted when he placed his hands in front of her eyes. She simply grinned and kept munching on the popcorn in her lap. Her uncle said that she knew who Jordan was at the time, but she was clearly cool as a cucumber in the presence of the basketball icon. “He’s a tough peek-a-boo player but he didn’t stand a chance against my popcorn,” Ledecky’s tweet read.

Jordan was not the only celebrity that Ledecky met as a child, though. In 1998, her mom took her and her brother to Rockefeller Center, where fans often gather in hopes of appearing on “The Today Show.” The group was interviewed by weatherman Al Roker, who also did not appear to impress a 16-month-old Ledecky very much. She did not smile, but she did wave at the camera with a little help from her mom. 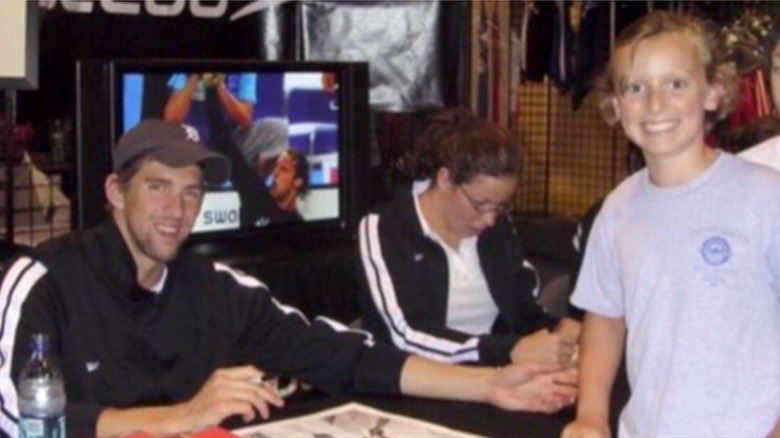 Swimming was in Katie Ledecky’s blood, but her parents could not have known that she would one day be mentioned in the same breath as an Olympic titan like Michael Phelps. According to The New York Post, her mother swam in college, and she introduced her daughter to the sport. “I think I’ve just always felt comfortable in the water from day one,” Ledecky told The Guardian. “My mom taught me how to swim, along with my brother, from an early age, and she made it fun.” By age 6, she was competing in a summer swim league in Bethesda, Maryland.

When she was 9 years old, Ledecky met Phelps at an autograph signing. “And then, five years later, I was on the Olympic team with him,” Ledecky said during an interview with “CBS This Morning.” “So it was pretty surreal in that moment to think back to meeting him when I was just starting to swim.” It was just one of Phelps’ many fan encounters, so he probably did not think anything of it at the time. He would later tell Sports Illustrated that Ledecky was a lot like him when he was a kid. “She’s not afraid. You don’t see that in very many females,” he stated. He agreed with those who think Ledecky swims like a guy, but noted that this is a compliment. “That’s part of what makes her so special,” he added.

Katie Ledecky's shocked everyone at the 2012 Olympics 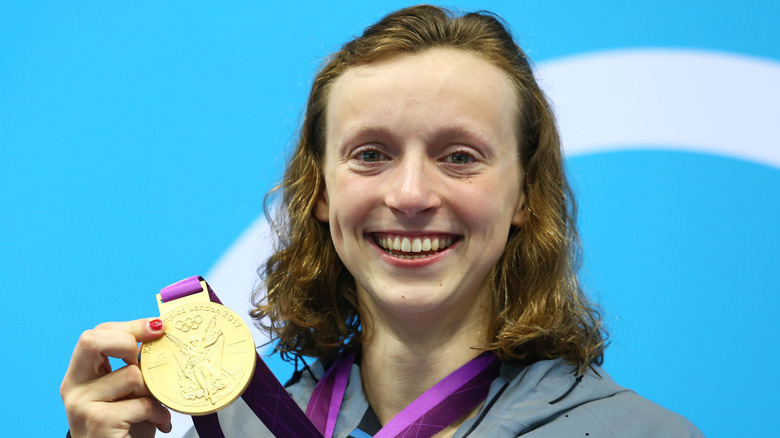 Katie Ledecky’s former coach, Yuri Suguiyama, helped the athlete develop her signature “loping” stroke in 2011. He told The Washington Post that it was partially inspired by something Ledecky did herself during a training session and a video of Michael Phelps racing in 2007. “He had a nice little hitch, or a gallop, and I was like, man, Katie could swim that way,” he said. Of course, all of Ledecky’s hard work on fine-tuning her stroke paid off when she qualified for the 2012 London Olympics in the women’s 800m freestyle after breaking the trials record.

British swimmer Rebecca Adlington was favored to win the event at the games, but Ledecky pulled off a shocking upset, and she did it definitively. She set a new U.S. record and got remarkably close to setting a world record. At the time, she was a 15-year-old student attending Stone Ridge School of the Sacred Heart in Bethesda. She was met with a hero’s welcome from her classmates and neighbors when she returned home from the games, but her mother told SB Nation that Ledecky handled all the attention “very well.” And, as for her brother Michael, he knew that she was not done yet. “She’s bound to accomplish even greater things,” he said.

While she surprised almost everyone at the 2012 Olympics, Katie Ledecky was expected to perform well when she qualified for five events at the 2016 games in Rio de Janeiro. She had set a world record in the 400m freestyle in 2014, and she got close to breaking it at the 2016 U.S. Olympic Trials. Her teammate, Ryan Lochte, confessed to Sports Illustrated that she could beat him during swim practice, and she was included on TIME Magazine’s list of the 100 Most Influential people. “I never thought I would see one person win the 200-m, 400-m, 800-m and 1,500-m freestyle in the same World Championships, which is exactly what Katie did last summer,” her profile written by Olympic swimmer Janet Evans read.

Ledecky did not disappoint at the games, where she crushed her own world records when she won the 400-m and 800-m freestyles. She earned two more gold medals in the 200-m freestyle and 4×200-m freestyle relay, and she helped the 4×100-m freestyle relay team take home the silver medal. One of the perks of being an Olympic champ is getting to meet celebrities like Bruce Springsteen, whose music Ledecky used to listen to on the way to swim meets. She got to show him her medals. “He said, ‘I always wondered what people do with these medals,”‘ Ledecky recalled during an interview with NBC Sports. “We laughed when my brother said, ‘They take them around to show them to rock stars.'”

Katie Ledecky made a splash when she graduated from college 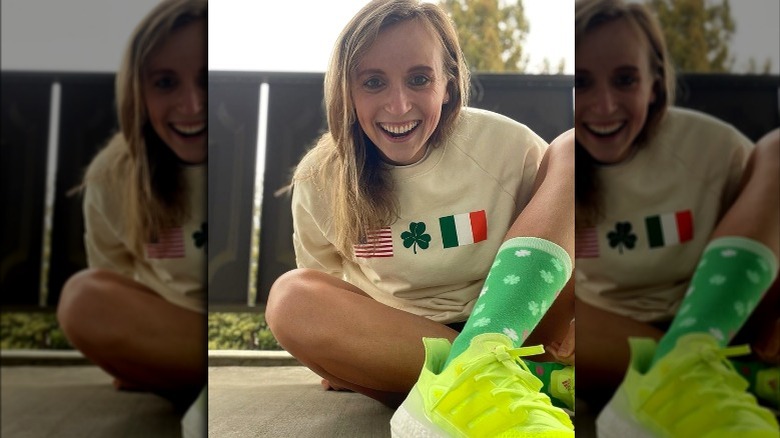 Kate Ledecky announced that she was not going to go pro after the 2016 Olympics. Instead, she passed up the opportunity to score lucrative sponsorship deals to compete collegiately instead. She told ESPN Radio that it was something she had always wanted to do. “I think it’s going to be really fun to be on a team with some really great friends and great swimmers and also just go to class with them,” she said.

Ledecky decided to attend Stanford University, where she majored in psychology and minored in political science. In 2020, she told People that she took virtual classes during the pandemic and was able to finish her degree sooner than she had previously planned. “I’ve had this amazing experience at a school I really love and a great place with great people,” she said.

Ledecky had to miss Stanford’s 2021 graduation ceremony due to a scheduling conflict: She was busy competing in the U.S. Olympic trials in Omaha. However, she found a fun way to mark the occasion by wearing her cap and gown over her swimsuit and posing poolside. She had another reason to celebrate after she qualified in all four of her races. As for her post-Olympic future, she told Insider that she might go to law school or business school. “I want to ensure I make an impact in whatever community I’m in.”