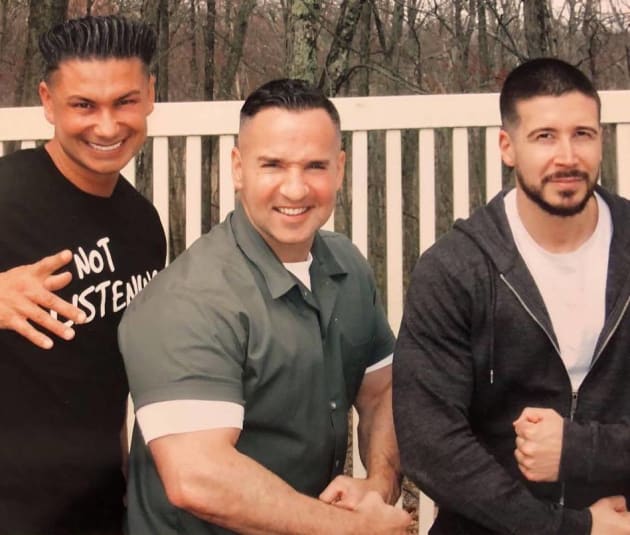 So wrote Mike “The Situation” Sorrentino on his Instagram page this past Saturday, inspiring a nation while also giving his 1.8 million followers their very first look at his life behind bars.

And, we gotta say, it doesn’t look too shabby!

In photos shared to his social media account over the weekend, this veteran Jersey Shore cast member posted snapshots of the visits he received from wife Lauren Sorrentino and good friends Vinny Guadagnino and Pauly D.

They all made the jaunt to a correctional facility in New York to check on Sorrentino, who was clearly psyched to see his loved ones.

As you can see above, Vinny, Pauly D and The Sitch all struck a classic macho man pose with their biceps exposed, making it clear that Mike is taking full advantage of the prison weight room.

He really can still do all those things while locked up.

Back in October, The Situation was sentenced to eight months before bars after he pleaded guilty to tax evasion.

The 36-year-old appeared in a New Jersey federal court at the time alongside Lauren, who he married just a couple weeks later.

Co-stars Jenni “JWoww” Farley and Vinny Guadagnino sat inside the courtroom during the proceedings as well, making it apparent that all these MTV personalities really are quite close off screen.

Which is actually pretty cool when you think about it.

They see each other through thick, thin and everything in between — including federal crimes.

Sorrentino and his brother Marc were initially indicted in September 2of 014 for tax offenses and conspiring to defraud the United States after allegedly failing to properly pay taxes on $8.9 million in income from 2010 to 2012.

In April of 2017, both men were indicted on additional charges including tax evasion, structuring and falsifying records.

In January of last year, Sorrentino pled guilty to one count of tax evasion.

Along with this jail sentence, he must also complete 500 hours of community service.

Moreover, Sorrentino was fined $10,000 for his illegal actions.

To his credit, however, he appears to be maintaining a positive attitude.

There were multiple reports of The Situation loving life life as an inmate, only for Snooki to actually confirm as much several days ago.

“We all talk to him through an email, so I talk to him like once a week… He’s in the gym a lot, so he’s probably gonna come out ripped.”

As you can see here, that’s true!