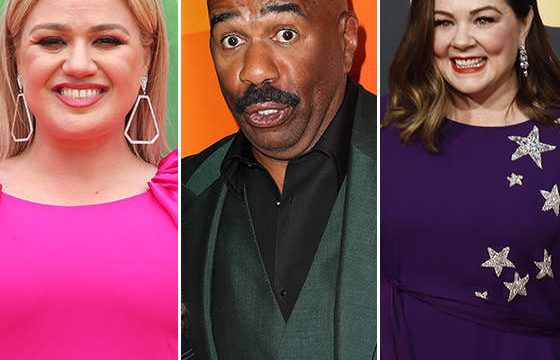 How many blogs talking about this story used the joke: “Steve Harvey is about to get a lot more sleep?”. I’m tossing my hat into the ring simply because I love the delicious taste of poetic justice. Yes, the man who works so hard and is only rich because he chooses not to sleep for an energizing eight hours like the rest of us peasants, has been canned from not one, but TWO of his jobs. Poor guy, but he’s got a tough attitude, so I’m sure we’ll see him pounding the pavement non-stop for the next 48-hours-straight while hopped up on energy drinks until he books himself something else.

Deadline reports that Steve Harvey must have slept in one day, because he’s been let go. Steve is going to be replaced by the Oscar nominated very funny and non-problematic Queen, Melissa McCarthy. I guess NBC wanted to go with someone who was just so sweet and inoffensive they couldn’t go wrong, and Melissa is that. She was the “quirky” one on Gilmore Girls. Gilmore Girls! You ever watch that? Standing out as quirky among that bunch of chuckleheads was an Oscar-worthy feat in itself.

Melissa will take over for the hosting duties of Little Big Shots, which is coming back for a fourth season. NBC Entertainment co-chariman, Paul Telegdy, was really excited about the change, calling it a “refresh” for the brand. And she really is, because apparently the show is going to change its format when Melissa comes on AKA: make it less boring and get more of us watching. He said at the NBC Upfronts:

“She’s going to bring a completely fresh perspective to it… Shows always go through an evolution and I know Meredith and the team in our Alternative division will come up with all sorts of fun ways to evolve the creative of the show because we feel that Melissa is a strong creative force with her own ideas about what the show should look like and changes will be apparent.”

Meanwhile, Steve won’t have his other regular daytime gig to fall back on, because that show is being cancelled. We learned last year that Steve was being replaced by America’s darling since 2002: Kelly Clarkson. His show, Steve, hadn’t been cancelled then, but we had learned that Kelly’s new talk show, The Kelly Clarkson Show, was going to be the new lead-in to Ellen Degeneres‘ monster daytime gabfest. Steve, it was assumed, would find another time slot. And they found one: Never O’Clock.

I guess NBC just had enough of paying for Steve’s show and trying not to look him in the eyes. And with angry Twitter descending upon them every time Steve pissed them off–I mean, it gets to be too much. Meanwhile, Twitter has definitely noticed a theme with Steve Harvey’s show getting cancelled as it’s timed with the end of Lee Daniels‘ Empire, and also his show Star got cancelled. And that theme was Miss Monique:

It seems that the enemies of Monique always fall.