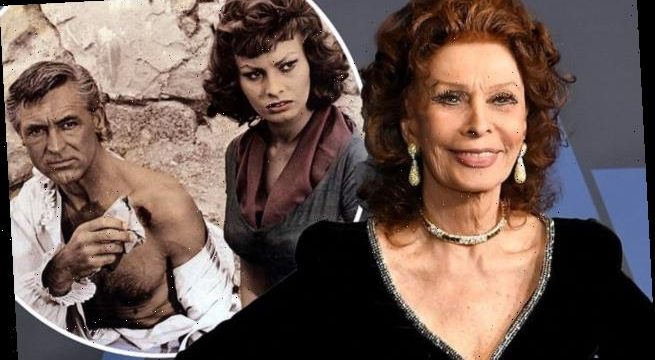 ‘That was my life’s dream and still is’: Sophia Loren, 86, says her biggest regret is ‘not getting married in a white dress’ as she insists former lover Cary Grant never proposed to her

Sophia Loren has revealed that her biggest regret is not having a white wedding when she married husband Carlo Ponti in 1966 – and she said she still dreams of it.

The Italian actress, 86, said that although she tries to ‘live with no regrets’ and has everything she ‘ever wanted’, she still wishes she ‘married in a white dress’.

Sophia and Carlo went on to have two sons, Edoardo, 47, and Carlo, 51, but she said despite her love affair with actor Cary Grant in 1957, he never proposed to her as was rumoured. 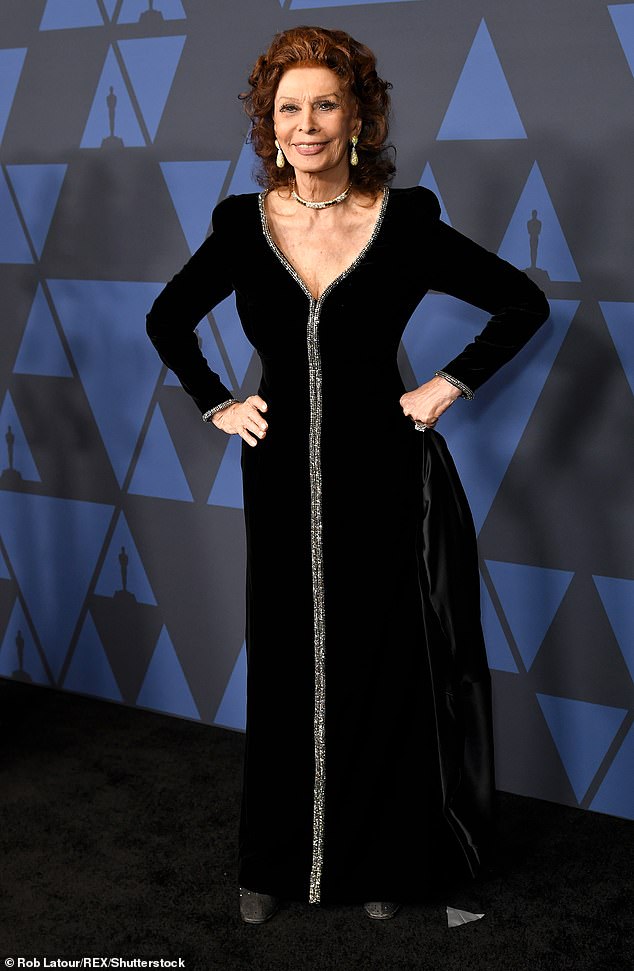 ‘That was my life’s dream and still is’: Sophia Loren, 86, has said her biggest regret is ‘not getting married in a white dress’ when  she walked down the aisle in 1966 (pictured in October 2019)

Speaking to Radio Times, she said: ‘It’s very hard to say you have no regrets. In life, you always go through so many experiences, but I have always tried to live with no regrets.

‘I think I’ve reached a peaceful life. I have everything I ever wanted, which is a wonderful family with beautiful children and beautiful grandchildren.

‘The only thing I regret a little is that I never got married in a white dress. That was the dream of my life, which is still inside me.’ 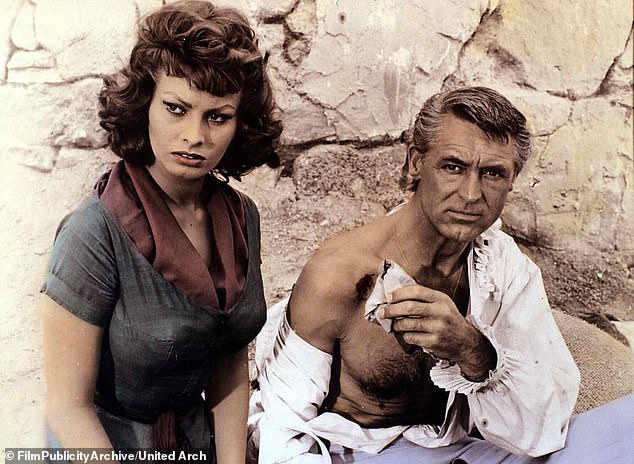 Affair: The Italian actress, 86, formed a relationship with Cary Grant while they were both working on the Spanish set of 1957 film The Pride and the Passion

He was finally able to obtain a divorce from Giuliana after they became French citizens and Sophia was free to marry the love of her life.

But the Hollywood icon, who believes she ‘never could have lived without loving’, replied with a strong ‘no’ when asked if she would walk down the aisle in a white dress now.

Before her marriage, Sophia formed a relationship with Cary Grant while they were both working on the Spanish set of 1957 film The Pride and the Passion. 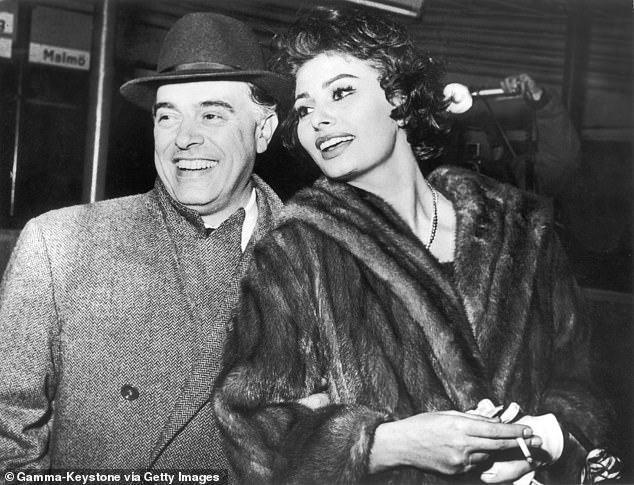 Decision: Sophia had to choose between Cary and Carlo Ponti, but she ultimately decided she did not want to give up ‘the love of my life’ for her American co-star 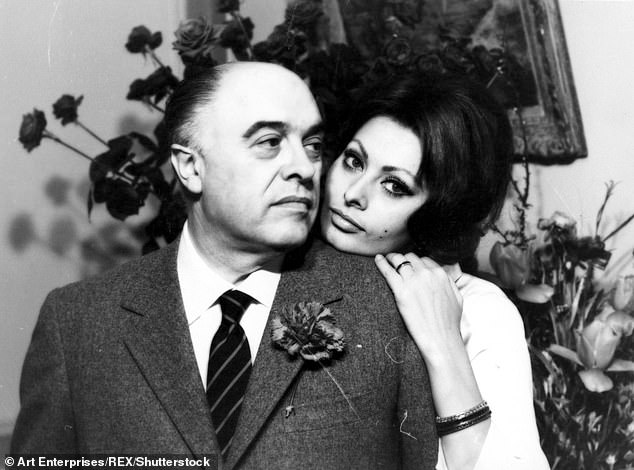 Nuptials: Sophia and Carlo are pictured on their wedding day in 1966 in France

She was just 23 years old at the time and Cary, who was married to his third wife Betsy Drake when they met, was more than 30 years her senior.

The actress insisted that her ‘ideas about love’ were ‘not clear’ at the time and said she had already met Carlo in Italy, who she had fallen in love with.

She explained: ‘We had a very nice relationship, but I was 23 years old and Cary was much older than me.

‘When you are 23, your ideas about love are not clear. You don’t know what you’re doing.

‘It was my first American film and many things in my life were happening, but I had met a man in Italy, Carlo Ponti, who I fell in love with.’ 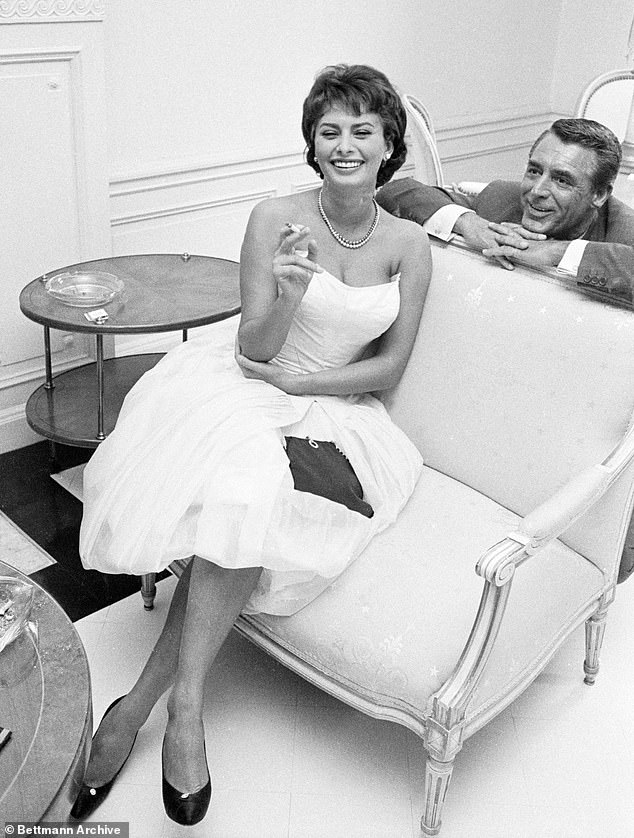 Rejection: Sophia insisted that Cary ‘did not propose’ to her, bucking the infamous claim that she had snubbed his proposal of marriage

Sophia famously had to choose between the two men, a decision that she said she ‘struggled with’, but she ultimately decided she did not want to give up ‘the love of my life’.

She explained: ‘Speaking about I had a big struggle with that. I didn’t want to give up the love of my life because I was doing a picture with a great star.’

But the actress has insisted that Cary ‘did not propose’ to her, bucking the infamous claim that she rejected his proposal of marriage. 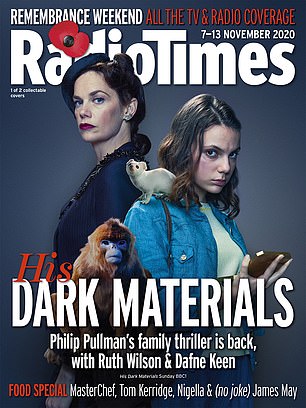 Marriage: The star replied with a strong ‘no’ when Radio Times asked if she would walk down the aisle in a white dress now

She said: ‘He didn’t propose to me. We were working together on my first American picture, The Pride and the Passion, along with Frank Sinatra.

‘Cary Grant was a very handsome man and a wonderful actor, but he didn’t propose. I mean, how can you propose while you’re doing a picture? It’s impossible.’

Sophia said that they wrote to one another frequently and said that ‘until the end’, they had a ‘long, wonderful and civilised friendship’.

Her late husband Carlo, a film producer with more than 140 titles to his credit, passed away in 2007 after 41 years of marriage to Sophia.

The Hollywood legend has made her return to acting in movie The Life Ahead, directed by her son Edoardo.

The movie follows the bond between an ageing Holocaust survivor, played by the acting veteran, and a young immigrant.

Read the full feature in this week’s issue of Radio Times magazine, on sale now. 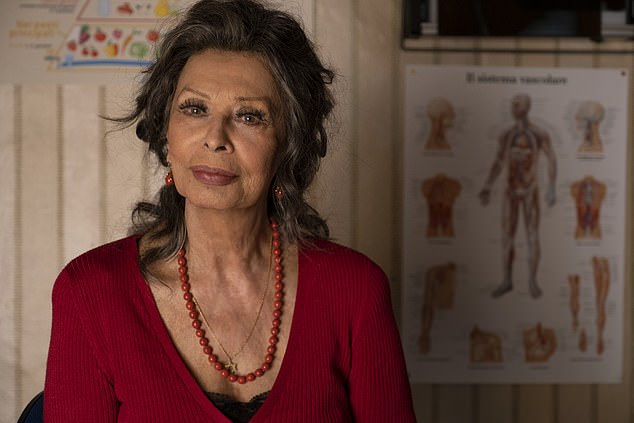 Movie: The Hollywood legend has made her return to acting in new movie The Life Ahead, which has been directed by her son Edoardo