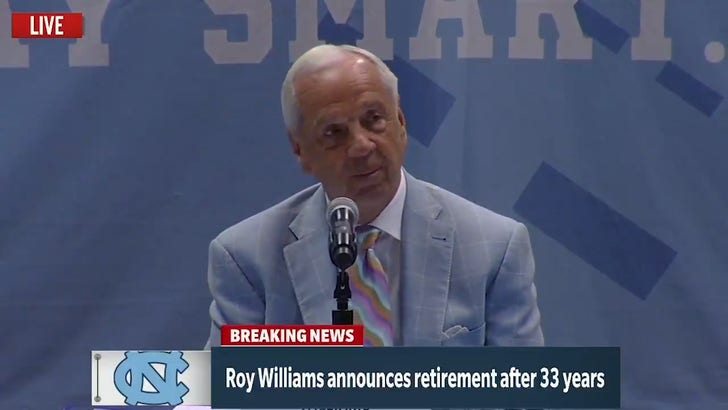 3:22 PM PT — An incredibly powerful moment from the legendary coach … who choked back tears while saying his final goodbyes to the sport.

“In today’s times, I should say I’m not retiring or resigning — I’m opting out,” Williams said Thursday. That’s the most ridiculous phrase I ever heard my whole life. Why the hell don’t you just say I quit?”

“So I’m old school and I can’t use those words … But I will tell you I am retiring and resigning as the men’s basketball coach at North Carolina. It’s been a thrill. It’s been unbelievable. I loved it. It’s coaching.”

Williams even made a comment about his announcement coming on April 1 — but made it clear, this isn’t an April Fools’ Joke.

Roy Williams — one of the greatest college basketball coaches of all time — is announcing his retirement after 33 seasons as an NCAA head coach.

Williams — who graduated from UNC in 1972 — has not announced the specific reason for his retirement. He’s expected to address the media at a news conference Thursday afternoon.

Williams has coached legends from Paul Pierce to Harrison Barnes and many, many more.

Williams was inducted into the Naismith Hall of Fame in 2007.

As a college head coach, he’s racked up 903 wins during his 33 seasons — which places him 3rd on the all-time wins list by a Division I head coach.

UNC issued a statement saying, “After 33 years as a Hall of Fame head coach, our beloved Tar Heel Roy Williams is announcing his retirement.   Thank you for all you have done and meant to everyone who plays and loves our game.”

Legendary college hoops announcer Dick Vitale also weighed in … “OMG I thought it was April Fools joke but it is TRUE Hall of Famer ROY WILLIAMS is retiring.”

“He’s been so good that he is one of my MT RUSHMORES OF COACHING in my 40 + yrs. Bob Knight – Coach K – Dean Smith – ROY WILLIAMS / Thanks for ALL the memories!”