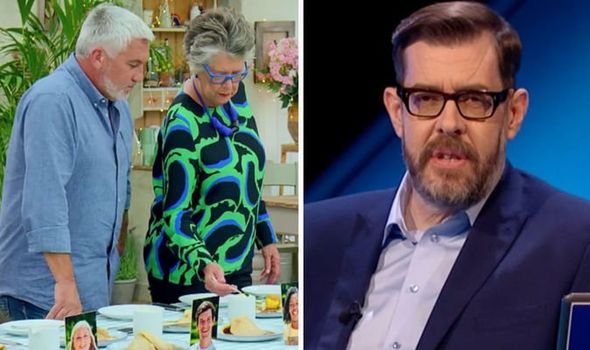 Richard Osman sat down to watch Channel 4’s The Great British Bake Off 2020 last night but was seemingly not impressed with what he saw. The cookery programme followed the remaining contestants as they made three different puddings for Dessert Week.

Each week the participants take on a trio of challenges and often come a cropper in the technical challenge, which yesterday saw them attempt to make Sussex Pond Pudding.

The traditional suet dish, made with butter and sugar, is normally boiled or steamed.

“I’m not interested in eating steamed anything #GBBO,” Richard wrote on Twitter, in view of his 976,500 followers.

“But why not fry them instead?” he said, when a social media user tried to tempt him with pictures of some beautiful steamed recipes.

“Just bake them,” the TV star later remarked in the comments section of his post.

One follower went on to list their favourite steamed puddings as a way of changing the Pointless presenter’s mind.

However, another follower added: “That steam pudding looked awful, come on Bake Off think you are running out of ideas, jelly on mousse is that baking!! What do you think Richard?”.

After completing their technical challenges, as well as their mini cheesecakes, the bakers moved on to their Dessert Week showstoppers – jelly art design cakes.

“Jelly AND evaporated milk combined!! Our treat as children. The trick is to whisk it frantically enough (by hand of course!) that it set in bubbles! Loved it!!” one Twitter user remarked.

“Oh my gran made this! We called it bubblegum for reasons unknown, except it was bubbly. Used to go on and on until she made it,” another follower recalled.

“Oooh… Now you’re talking! Can they do a 70’s week… Mandarin flan with evaporated milk,” a third person suggested.